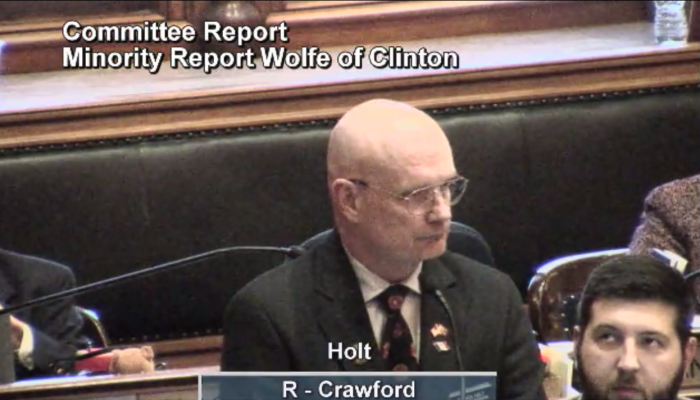 The first Iowa House floor votes of 2019 are in the books, and they played out exactly as you'd expect. On two straight party-line votes, 53 Republicans rejected a Democratic effort to allow legally cast absentee ballots to be counted, then dismissed Kayla Koether's contest of the House district 55 election result.

The chamber's January 28 debate was enlightening. If you have a few hours to spare, I recommend watching the videos of the afternoon and evening sessions on the legislative website.

Bergan leads Koether by nine votes (6,924 votes to 6,915) according to the certified results, which do not take into account ballots from 29 Winneshiek County residents. He's dodged media inquiries for months while Koether fought to determine how many of those ballots were mailed on time, and then to get the valid ones counted.

Some of the disenfranchised voters joined Koether on a bus to Des Moines Monday. Bergan didn't show up when they spoke about why they want their votes counted. These people didn't make any of the mistakes that can invalidate an absentee ballot, such as not signing or sealing the envelope. Republicans have excluded their ballots solely because the U.S. Postal Service sprayed the wrong kind of ink on the envelope.

Chances are, Bergan would still be ahead if the disputed ballots were tallied. Why wouldn't he want to protect the fundamental right to vote and remove any doubt about his legitimacy?

We may never know. He didn't rise to speak during the House debate and refused to yield to questions from State Representative Brian Meyer. (It's rare for Iowa lawmakers not to engage with colleagues under those circumstances.) One of two Democrats on the election contest committee, Meyer wanted to know, "do you believe your constituents should have their voices heard?"

State Representative Chuck Isenhart underscored during the evening session that we don't know whether Bergan attempted to talk to any of the disenfranchised voters at any time since the election.

Bergan rightly abstained from voting on the majority and minority election contest reports, citing House Rule 76 ("No member shall vote on any question in which the member or the member's immediate family member [...] has a direct financial interest different from other similarly situated persons or classes of persons of the general public.")

But that rule doesn't prevent a lawmaker from speaking about such a vote. At any time before, during, or after yesterday's debate, Bergan could have explained why protecting his seat--which Republicans don't need to keep control of the chamber--was more important than figuring out who really won the election.

Instead, he kept his mouth shut and let the rest of his caucus vote to keep 29 citizens' ballots forever sealed.

2. Robotically repeating "rule of law" is not the same as following the rule of law.

Several House Republicans are attorneys, including special election contest committee member Jon Jacobsen, but none were eager to defend the majority report. Judiciary Committee Chair Steven Holt, who led the contest committee, did almost all the talking for the GOP.

Holt frequently claimed to be upholding the rule of law. As during the contest committee's final meeting, he hung his hat on three points:

In his closing remarks, Holt asserted he would have reached the same conclusion against counting the ballots if the parties' roles had been reversed.

I would remind this body that administrative rule does indeed have the force of law, and I believe that democracy says we follow the rule of law, particularly in a contested situation like this.

You know, we cannot change the code with this report, nor can we change the rules in the middle of the contest. That wouldn't be fair to anybody, anybody at all.

Again and again, Democrats reminded House members that administrative rules can't supersede state law, let alone the constitutionally-protected right to vote. It was a recurring theme in remarks by State Representative Mary Wolfe, the ranking Democrat on Judiciary as well as the election contest committee.

House Minority Leader Todd Prichard, who has handled a lot of civil and criminal litigation, spoke from experience with how lawyers and judges interpret the law. People may disagree on whether the 65 vertical lines on these envelopes are "intelligent mail barcodes." But since voting is a fundamental constitutional right, "legal analysis mandates that you err on the side of preserving the right to vote."

Several Democrats disputed Holt's description of the 2016 legislature's intent. State Representative Bruce Hunter said he authored the amendment about intelligent barcodes, which State Senator Jeff Danielson later introduced in the upper chamber. Democrats supported that language to "make sure that every vote that was cast on time be counted," Hunter said. (In 2012 and 2014, hundreds of Iowa ballots were tossed for lack of a postmark, even though voters had mailed them prior to election day.)

As Hunter put it during the afternoon session,

So, the rules that are the basis of the majority report are in dispute.

The intent of the amendment that those rules are governing is in dispute.

The only thing that is not in dispute is that 29 people in Winneshiek County cast a proper ballot, and they cast it on time.

Wolfe was among several lawmakers who highlighted Republicans' failure to comply with Iowa Code 57.5. That provision states,

The parties to any contested election shall have the right, in open session of the court or tribunal trying the contest, and in the presence of the officer having them in custody, to have the ballots opened, and all errors of the precinct election officials in counting or refusing to count ballots corrected by such court or tribunal.

After reading out the same passage, Meyer challenged Holt on the majority report's claim that "there exists no legal authority to open and count the twenty-nine ballots in question." Holt didn't acknowledge that 57.5 required the House (in its role as a contest tribunal) to open the disputed ballots.

"Does it not say 'shall'?" Meyer countered.

"Like I said, you have to read--just like, you know, verses in the Bible, you have to understand everything that comes before and after that code section," Holt replied. "I don't think it [57.5] is relevant at this point."

Holt mentioned several times that a Polk County District Court dismissed Koether's lawsuit, saying the House was the venue to decide election contests. But as Bleeding Heartland discussed here, Judge Scott Beattie assumed Koether would be able to "conduct discovery, issue subpoenas and take depositions as part of the contest procedure," under Iowa Code Section 59, and would be able to have "the ballots opened and considered" under 57.5.

None of that happened, because the three Republicans on the contest committee only allowed lawyers for each side to present oral arguments on January 16.

Wolfe, Meyer, and others hammered on the lack of due process. Holt objected that Koether "was given the opportunity to present her case and her evidence [...] We heard arguments from both sides, we asked questions [...]." Meyer pointed out that even the lawyer retained by Republicans, Matthew McDermott, agreed oral arguments were not equivalent to evidence or witness testimony.

Representative Rick Olson questioned Holt about another lapse in the majority report. Judge Beattie observed in a footnote to his December ruling,

As part of the House of Representative’s duty and responsibility as the “contest court”, it will need to determine the meaning of “intelligent mail barcode” under Iowa Code § 53.17(2). In deference to the separation of powers, this Court will not address that issue.

Koether is likely to challenge how the House handled her contest in District Court. While the Iowa Constitution authorizes legislative chambers to resolve election contests, it doesn't permit them to trample due process. Republicans flouted some provisions of state law, opening the door to judicial review.

I don't know whether any of the disenfranchised voters can join a lawsuit at this point. A court might find that they should have asserted their constitutional claim before the election was certified, since the Winneshiek County auditor (not the Iowa House) initially excluded their ballots. I would welcome insight from attorneys with experience in election cases or constitutional law generally.

Final note: Former Republican legislator Darrell Hanson told me in December that the 1981 Iowa House election contest was "the only vote I ever cast that I knew was wrong at the time of the vote." How many of the current House Republicans will someday say the same about what happened this week?