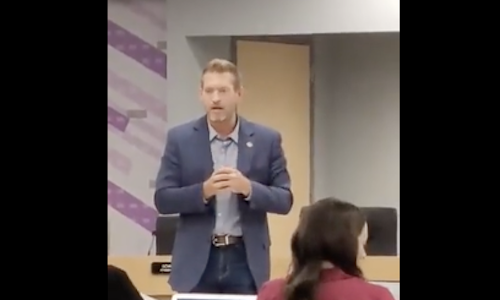 Iowa Republicans didn't speak out today for ensuring the safety or equality of trans or gender-nonconforming people. When GOP politicians acknowledge LGBTQ Iowans exist, it's usually to portray them (and any attempt to accommodate them) as a threat to straight white Christians, whom Republicans value above all others.

Iowa Senate President Jake Chapman announced this week that he is having legislation drafted "to create a new felony offense" in Iowa for educators who disseminate "what I believe to be obscene material." Chapman promised his bill will have "additional mechanisms to force prosecutions or allow civil remedies."

Here's a brief clip of Chapman's remarks during a Johnston school district meeting on November 18. He is backing criminal investigations of teachers and enhanced penalties for exposing children to material he finds offensive.

IA State Senator Jake Chapman thinks teachers who “disseminate” The Hate U Give and Diary of a Part Time Indian should be criminally prosecuted?!? You know what those two books have in common… the talk about the BIPOC experience. Not subtle guys. pic.twitter.com/oZzPvOIy6p

The district convened the meeting because two parents complained that the books The Hate U Give by Angie Thomas and The Absolutely True Diary of a Part-Time Indian by Sherman Alexie "were inappropriate and obscene." Chris Higgins and Sarah Kay LeBlanc reported for the Des Moines Register,

The Gilberts' complaint centered on sexually explicit content in "The Absolutely True Diary of a Part-Time Indian" and explicit language and what they deemed "anti-police sentiment" in "The Hate U Give."

"There are plenty of perspectives in this world that can address people of color without derogatory, racist and obscene material," Mandy Gilbert said.

It's well-documented that Black Americans' encounters with law enforcement are often different from what happens to white people. No one appointed or elected Mandy Gilbert to be the arbiter of what teenagers should learn in school.

To their credit, Johnston's committee members decided not to remove the books from the curriculum. But Chapman warned, "I can tell you the Senate and the House stand willing and ready to do something about this, so I'm just asking you to really consider what you’re doing with giving books with obscene material to children."

Meanwhile, Ankeny parents including "QAnon adjacent" mom Emily Peterson are demanding the removal of books about coming of age as a queer person.

Chapman has asserted on social media that the targeted books violate Iowa's obscenity law, Iowa Code Chapter 728. Apparently the Senate's second-ranking Republican couldn't be bothered to read all the way down to code section 728.7:

Nothing in this chapter prohibits the use of appropriate material for educational purposes in any accredited school, or any public library, or in any educational program in which the minor is participating. Nothing in this chapter prohibits the attendance of minors at an exhibition or display of art works or the use of any materials in any public library.

It's developmentally normal for teenagers to be curious about sexuality and engage in sexual exploration. In my day, straight girls often learned from Judy Blume novels, while straight boys passed around pornographic magazines. LGBTQ kids rarely had access to any resources, age-appropriate or not.

I don't remember being assigned any material in high school that centered Black or Latino or American Indian people. Racism was a theme in some books we read, like To Kill a Mockingbird. But I don't recall reading any novels or memoirs by authors of color.

Chapman claims authority "as a father of five children" to override the judgment of professional educators. He doesn't speak for all parents. As a mother of two teenagers, I want public school libraries to speak to the wide range of human experience. I would rather have my kids learn about sexuality from material that has been vetted by librarians, which explains the importance of consent (as opposed to explicit videos many teens can access online).

I also don't want my white children to be sheltered from learning about systemic racism in the American past and present.

If people like Chapman don't want their kids exposed to those perspectives, they can ask the school district for an accommodation, or choose some other way of educating their own children. Their hangups and white fragility should not limit what everyone else's children can read.

The conservative message is not subtle: don't make my kids confront the reality of life in the U.S. for those less privileged. We will use our power to govern Iowa for the comfort and convenience of straight white Christians. Comply, or you may be fired or sued or even criminally prosecuted.

For students of color who already encounter racism on a regular basis, and LGBTQ youth who may feel isolated or bullied, that message is another reminder that their voices and their needs will always be secondary in schools that are supposed to serve all.

For marginalized kids who suffer from higher rates of anxiety, depression, and suicidal ideation, that message is not only cruel but could be deadly.

Whether Republican politicians and intolerant parents are true believers or opportunists, their attempt to impose their values on everyone, at the expense of vulnerable kids, is the real obscenity.

Many teenagers struggle with thoughts about self-harm or suicide, and that problem is more widespread among certain groups. The national suicide hotline number is 1-800-273-8255. The Suicide Prevention Resource Center website has pages dedicated to resources for Hispanics and Latinos, Blacks and African Americans, Asian Americans and Pacific Islanders, and American Indians and Alaska Natives.

Zaun said he understands efforts to expand diversity in educational materials having authored legislation regarding racial profiling. But he also said the materials being given to students are not appropriate. [...]

“I would have to say I’m sick to my stomach that it’s going to take another meeting. In the meantime, this garbage curriculum or books are being taught to our kids. And I can assure you that I will be working on this legislation next year in regards to enhancing the penalties.

“My warning to all the teachers and the administrators is you’re going to be in jail. Because this is distributing pornography. And I will work my tail end off and it will become law. And unfortunately, we have to have this conversation. I think the people of the Johnston School District spoke up (on election night) and said enough is enough. And I again cannot believe that we’re going to have another meeting when this book is still being taught to our kids. And I just sometimes wonder what happened to common sense.”

Zaun chairs the Iowa Senate Judiciary Committee, which would consider any proposed changes to the obscenity statute. He is also the third-ranking Republican in the caucus (Senate president pro-tem).