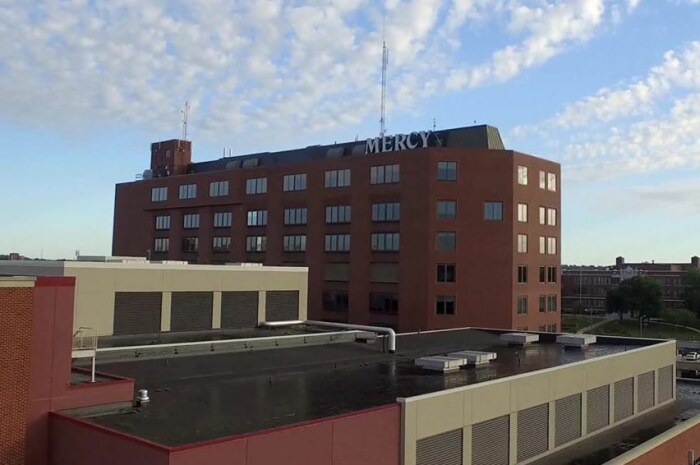 As Iowa’s COVID-19 hospitalizations reach levels not seen since December 2020, the state is contracting for 100 traveling nurses and respiratory therapists to be deployed in hospitals around Iowa.

Iowa Department of Public Health spokesperson Sarah Ekstrand did not list the participating hospitals but said in a December 7 email that the deployment will support seventeen facilities “that provide 1, 2, and 3 Trauma Level care.”

Communications staff for Mercy Cedar Rapids, MercyOne (which operates hospitals in Des Moines, West Des Moines, Dubuque, Clinton, Sioux City, Mason City, and Waterloo), Genesis Health System in Davenport, and UnityPoint’s Allen Hospital in Waterloo confirmed to Bleeding Heartland that they will receive some of the staffing assistance. UPDATE: The full list can be found at the end of this post.

According to a text message sent last week to nurses on Favorite Healthcare Staffing’s roster, the traveling nurses will be expected to work 60-hour weeks for six weeks. The pay rates will be $125 per hour for intensive care nurses, $120 per hour for emergency room nurses, and $110 per hour for medical-surgical nurses. The contract also includes a private hotel room for the duration and a one-time transportation bonus of $200.

Federal funds “from the most appropriate allowable funding course” will cover the cost of the deployment, Ekstrand said.

A nurse who inquired about the assignment on December 7 was told Favorite Staffing is not making this contract available to Iowa-based nurses, the nurse told Bleeding Heartland. That policy is presumably designed to discourage nurses from quitting their current jobs at Iowa facilities. The hourly rate on offer is substantially higher than typical salaries in the field.

Iowa’s COVID-19 hospitalizations more than doubled in August after the Delta variant became dominant in the state this summer. By the end of August, more than 500 Iowans were receiving treatment in hospital, the highest number since early January. That level was already straining capacity at many facilities, leaving patients with and without coronavirus stuck in emergency rooms for longer than usual, waiting for an available intensive care bed.

Throughout September, October, and November, Iowa’s total COVID-19 hospitalizations fluctuated mostly between the low 500s and mid-600s, an unsustainable burden for some facilities. During the first week of December, the number rose above 700 for the first time since December 2020. The latest official figures show 172 Iowans receiving ICU treatment for COVID-19, also the highest level since December 2020.

Citing infectious disease specialist Dr. Aneesa Afroze, Tony Leys and Tim Webber reported for the Des Moines Register last week that the COVID-19 caseload at Des Moines MercyOne Medical Center “more than doubled” since early November, and “The emergency department has become so crowded that some patients are being treated in the hallways.”

Genesis Health in Davenport has postponed scheduled elective procedures or surgeries that usually would require an ICU stay, senior communications specialist Craig Cooper confirmed to Bleeding Heartland on December 6. The Southeast Iowa Regional Medical Center in West Burlington “had to transfer patients requiring ICU care to other hospitals because we didn’t have beds available,” according to Gina Anderson of the Great River Health System.

Citing New York Times data, Clark Kauffman reported for Iowa Capital Dispatch on December 7 that the “seven-day average of COVID-19 hospitalizations in Iowa now stands at 749 – the highest level for the year, and more than five times the seven-day average that was reported in June.” Iowa has been averaging more than 1,000 positive COVID-19 tests a day for months.

Hospitalizations are unlikely to trend downward anytime soon. Coronavirus patients tend to have longer hospital stays, especially those requiring ICU treatment. Iowa’s positivity rate (percentage of those tested in the past week who came back positive) is now the fourth worst in the nation. New daily admissions for COVID-19 have exceeded 100 on several dates recently, a level rarely seen this year.

Infections acquired at Thanksgiving weekend gatherings will likely cause more severe illness in the coming weeks. And colder winter weather means more people congregating indoors. Governor Kim Reynolds abandoned all mask requirements and capacity restrictions for businesses in February and hasn’t encouraged even voluntary mask wearing or social distancing for months, despite the rapid increase in case counts and hospitalizations.

Iowa’s COVID-19 fatalities rose sharply this fall, as expected with so many of the sick receiving inpatient treatment. Dozens of Iowans died of the virus each week in September, October, and November. As of December 6, the pandemic had claimed at least 7,548 Iowa lives, according to data compiled by Sara Anne Willette. More than 1,200 of them died since August 1. Those figures don’t include any Iowans who died of other conditions, such as heart attacks, strokes, or acute infections, while waiting for treatment in overcrowded hospitals.

UPDATE: On December 8 the state reported new high hospitalization numbers for 2021: 777 total COVID-19 hospitalizations, 185 of those patients in ICUs, and 133 patients admitted during the past 24 hours.

The governor’s staff did not reply to inquiries on December 6 or 7, but spokesperson Alex Murphy emailed on December 8 that the decision to deploy traveling nurses and respiratory therapists “was made by Gov. Reynolds in consultation with her administration and will be paid for with federal funds.”

LATER UPDATE: The seventeen hospitals that will receive some temporary assistance from nurses and/or respiratory therapists are:

Iowa is expected to spend more than $9 million to place 100 out-of-state nurses and respiratory therapists at the state’s larger health care facilities for six weeks of the latest spike of COVID-19 hospitalizations.

The state agreed early this month to pay a Kansas company $220 per hour for the nurses it supplies, with the expectation that the nurses will work 20 hours of overtime each week at the rate of $330 per hour, said Sarah Ekstrand, an Iowa Department of Public Health spokesperson.

That equals more than $15,000 per week per nurse the state will pay Favorite Healthcare Staffing, of Overland Park, Kansas. The company acts as a go-between that solicits freelance nurses for hospitals. The company pays the nurses and provides housing for them, most often at hotels, according to recent job listings.