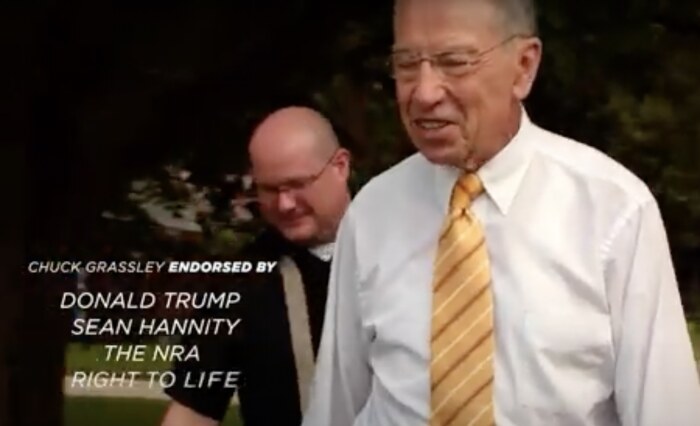 Grassley, Ernst not among senators working on bipartisan gun deal

Ten Democratic and ten Republican U.S. senators have agreed to a framework for bipartisan legislation on gun violence, they announced in a June 12 news release.

Iowa's Senators Chuck Grassley and Joni Ernst are not part of the negotiating group.

The deal is far from final, and I anticipate it will fall apart before any legislation is finalized. But here are the terms agreed by lead negotiators Chris Murphy (D), Kyrsten Sinema (D), John Cornyn (R), and Thom Tillis (R), and tentatively supported by President Joe Biden and House Speaker Nancy Pelosi:

Ernst and Grassley didn't sign the June 12 statement and at this writing, have not commented on the package in any news release, or on their social media feeds.

Throughout their political careers, Iowa's senators have consistently voted against firearms safety legislation. It's unlikely they would support any bill not blessed by the gun lobby. The firearm industry trade association known as NSSF honored Grassley in April as their 2021 "legislator of the year."

Before Iowa's June 7 primary election, in which Grassley faced a challenger from the right, the senator's campaign aired a television commercial touting the incumbent's endorsement by the National Rifle Association.

If some bill combining background checks, mental health funding, and school security measures does get through the Senate, it could face opposition from U.S. House Democrats who want more consequential limits on firearms sales. House members, including Iowa's Representative Cindy Axne (IA-03), voted on June 8 to prohibit people under age 21 from purchasing some semi-automatic weapons, and to ban bump stocks and high-capacity magazines for civilians.

On the other hand, the Senate's framework includes portions of bills that have cleared the lower chamber, such as a measure on extreme risk protection orders, which passed on June 9.

Whenever the House has voted on gun safety bills during the current Congress, including the measures approved last week, Iowa's representatives have split along party lines. Axne has supported new restrictions, while Republicans Ashley Hinson (IA-01), Mariannette Miller-Meeks (IA-02), and Randy Feenstra (IA-04) have voted no. Iowa's Republican members of Congress have co-sponsored alternative legislation, which purports to address gun violence in ways that do not restrict firearms sales or ownership.

“I’m encouraged to see the bipartisan group of senators making headway on the important issues of mental health, school safety and curtailing gun violence,” he told Iowa Starting Line. “As always, I need to see legislative text, which has yet to be written, before making a final decision on how I’d vote.”

He said he preferred bipartisan legislation he was sponsoring, the EAGLES Act, which would increase the role of the Secret Service in preventing school shootings.

Later update: Ernst's spokesperson told the Cedar Rapids Gazette, "While this is currently only an outline of general and unspecific proposals, Sen. Ernst will evaluate the specifics of any legislation when there is bill text to do so."