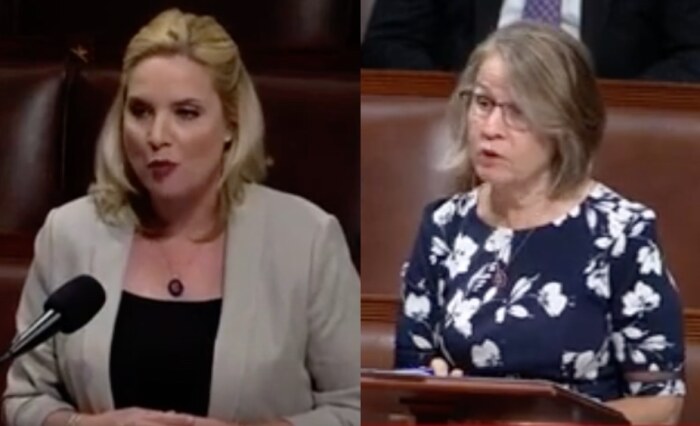 All three U.S. House Republicans from Iowa voted this week against a bill that would provide a federal guarantee of access to contraception.

But if Iowans encounter any mainstream news coverage of the issue, they may come away with the mistaken impression that GOP Representatives Ashley Hinson and Mariannette Miller-Meeks took a stand for contraception access.

The episode illustrates an ongoing problem in the Iowa media landscape: members of Congress have great influence over how their work is covered.

It's been more than a decade since any Iowa-based news organization had a correspondent on the ground in Washington to cover the activities or our state's representatives in the federal government. As a result, most reporting on Iowa's members of Congress is generated by the elected officials' own press releases or conference calls. (Newspapers and some broadcast media websites also regularly publish guest commentaries by members of Congress, but today I will focus on straight news coverage, not opinion pages.)

The Right to Contraception Act, which House members approved on July 21 by 228 votes to 195, was inspired by the U.S. Supreme Court's Dobbs ruling, which overturned the Roe v Wade precedent on abortion rights. In a concurring opinion, Justice Clarence Thomas argued that the court should revisit other longstanding precedents, including the 1965 Griswold case, which established a right to contraception.

The bill declares contraception as "a fundamental right, central to a person’s privacy, health, wellbeing, dignity, liberty, equality, and ability to participate in the social and economic life of the Nation." It defines contraception to include a wide range of methods used to prevent pregnancy, as well as sterilization procedures. It notes that some states have obstructed access to contraception, including emergency contraceptives (commonly known as Plan B) and long-acting reversible contraceptives (intra-uterine devices or IUDs). At least four states restrict "access to public funding for these products and services," and twelve states allow health care providers to refuse to provide contraception services.

Consequently, the bill establishes a statutory right for individuals to obtain and use contraceptives, and for health care providers to prescribe contraception services. It does not mention medications used to induce abortions (usually mifepristone and misoprostol).

House Republican leaders, who view Hinson as a rising star in the caucus, gave her the role of offering the "motion to recommit," which is the minority party's last chance to stop a bill from receiving a vote on final passage. She used her House floor speech to tout legislation she recently introduced, which "would require the FDA to give priority review for over-the-counter access to routine-use oral contraceptives that the agency has already deemed safe for women aged 18 and up." Hinson added, "I want to emphasize this is for regular birth control pills—not emergency contraceptives like Plan B."

Within the anti-abortion movement that dominates Republican politics, emergency contraception (which prevents an egg from being fertilized) is sometimes wrongly characterized as preventing fertilized eggs from implanting into the uterine wall. For that reason, Plan B is often misrepresented as an abortifacient drug.

In written statements, both Hinson and Miller-Meeks touted their support for Hinson's alternative, which they said would protect access to contraception as well as the "moral and religious beliefs" of health care providers. But Hinson's bill does not address many kinds of contraception covered under the Democratic bill, such as barrier methods like condoms or diaphragms, injectable hormonal birth control, IUDs, transdermal patches, or vaginal rings.

While oral contraceptives are widely used—according to Hinson, about 70 percent of women aged 18 to 64 will use birth control pills at some point in their lives—they are contraindicated for some who want to prevent pregnancy. Americans who prefer or need other methods could be denied access by state laws or by pharmacists citing moral objections.

In addition, Iowa Starting Line's Nikoel Hytrek pointed out that under Hinson's bill,

this over-the-counter access only applies to adult women, with no mention of the thousands of teenagers who use birth control pills for things like managing menstruation and/or acne, as well as those who use it to avoid pregnancy.

In 1977, the Supreme Court ruled minors have a constitutional right to obtain contraceptives, and states can’t require parental consent.

Hytrek was the only Iowa reporter to explain how Hinson used her alternative (which even some Republican colleagues opposed) to confuse the issue and obscure the "bad vote" she was about to take.

HOW IOWA MEDIA COVERED THE STORY

Following House approval of the Right to Contraception Act, the Des Moines Register's website ran a news brief by USA Today. The headline emphasized that eight House Republicans joined Democrats in voting to codify access to birth control, and the story didn't mention that Iowa's three Republicans voted no. UPDATE: On July 27, the Register published a story by Katie Akin headlined, "Iowa Republicans lead pared-back birth control bill as Democrats try to codify right to contraceptives." However, that story was behind a paywall for subscribers only.

Similarly, the Dubuque Telegraph-Herald, one of the largest newspapers in Hinson's district, ran an Associated Press story that did not mention where the Iowans stood on the bill.

The Cedar Rapids Gazette's Tom Barton did report on the Iowa delegation's party-line split. But that story highlighted Hinson's and Miller-Meeks' reasons for opposing the bill, devoting more paragraphs to their talking points and preferred legislation than to the Democratic position.

Earlier this week, Barton wrote up the news releases announcing the Hinson bill, framing the story around the GOP proposal that had no chance of passage, rather than the bill on track to advance from the House.

That article included background information provided in the Republicans' news releases, such as, "As a state senator, Miller-Meeks introduced and passed a bill in the Iowa Senate allowing women over 18 to buy oral contraceptives over the counter in Iowa." It did not mention inconvenient facts like Hinson's vote in the Iowa House to defund Planned Parenthood's family planning programs, months after telling constituents that she had used a Planned Parenthood clinic herself and was committed to "not making it harder on anyone to get services."

Due to content-sharing agreements, Barton's story reached well beyond the Gazette's subscriber base. The Ottumwa Courier and Quad-City Times were among the newspapers that published the article, with the same Republican-friendly headline ("Hinson, Miller-Meeks introduce over-the-counter birth control measure").

Radio Iowa, which produces news briefs for dozens of Iowa radio stations, also reported how the Iowans voted on the Right to Contraception Act. But that story by O.Kay Henderson included only a half-sentence excerpt from Axne's statement (“people deserve the right to make decisions about when they want to have children”). In contrast, Hinson received far more space to defend her position.

“It allowed for widespread use of abortion pills,” Hinson said this morning during a conference call with Iowa reporters. “It would violate conscience protections for health care providers. It could send taxpayer dollars to abortion providers as well.”

Hinson and a Republican congresswoman from South Carolina have proposed a bill that instead would guarantee women could buy birth control pills over the counter at a pharmacy.

“That’s something I hear from a lot of women, the want to go to their pharmacy and get that pill,” Hinson said. “Millions of American women safely take these drugs already, so I see our solution as a common sense policy, particularly for women in rural areas who sometimes have to go a significant distance, maybe sometimes up to an hour, to get even a doctor’s appointment, let alone going to the pharmacy.”

Hinson's staff (like those working for Senators Chuck Grassley and Joni Ernst) do not allow Bleeding Heartland to participate in her occasional conference calls. So I don't know whether any journalists followed up to challenge Hinson's false claims (the Democratic bill does not cover pills used for medication abortions).

Nor can I say whether anyone asked about rural Iowans who may need some other form of birth control, which the GOP bill doesn't protect. What if the only local pharmacist doesn't want to sell barrier methods? What about rape victims who can't obtain emergency contraception in their area?

The Washington Post's Marianna Sotomayor and Leigh Ann Caldwell showed how easy it is to incorporate some fact-checking in a story about Congressional votes.

Hours after the House passed their legislation Thursday, Sen. Patty Murray (D-Wash.) tried to force passage of another bill that would provide billions of dollars in funding for clinics that provide family planning services, including contraception. [...]

Republicans objected. Sen. Joni Ernst (R-Iowa), who has her own bill to expand access to over the counter birth control, called the Democratic legislation a “wolf in sheep’s clothing,” saying the funding would help provide abortions since some family planning clinics often provide abortion services in states that still allow it. But federal Title X funds are prohibited from being used on abortion services for family planning. Murray, still standing at her desk on the Senate floor during Ernst’s objection, shook her head at the allegation.

That kind of reporting benefits from having someone on the ground to follow U.S. House and Senate happenings.

UPDATE: A reader pointed out, "When purchased over the counter, it comes out of pocket and often health insurance will no longer apply. This is why many pregnant women get prenatals [vitamin] prescribed, in order for insurance to cover the cost. Making contraception available OTC actually does very little to make contraception accessible to rural women if cost is a barrier."

Top images of U.S. Representatives Ashley Hinson (left) and Mariannette Miller-Meeks are cropped from official video of their House floor speeches on July 21 and July 15.