(Wednesday is the Jewish holiday of Yom Kippur, so special thanks to naturalist and photographer Leland Searles for contributing this week's wildflower post early. In case you missed it, I highly recommend his previous contribution to the Iowa wildflower Wednesday series. - promoted by desmoinesdem)

Have you taken a walk in the woods with a toothache? Relief may have been nearby. This guest wildflower blog, like my last one, doesn’t describe a colorful, flashy flowering plant. Instead, you will read about Common or Northern Prickly-Ash, sometimes called “Toothache-Tree.” Its scientific name is Zanthoxylum americanum, meaning “American yellow-wood.”

First, the details of identification. Prickly-Ash grows in dry to moist (but not usually wet) woodlands, in places where sun shines: woods edges, clearings, gully and stream banks, and sometimes in open disturbed sites. Often you’ll find more than one because it spreads from underground roots, as well as seeds. During the growing season, two features readily identify it: paired thorns along the twigs, especially at leaf nodes, and long, compound leaves that are feather- or pinnate-compound. Walking through a patch of this woody understory tree, you may notice the thorns raking your clothes. It is not nearly as unpleasant as getting snagged by a Multifora Rose, which may stop you dead in your tracks.

Unlike ashes (its namesake), walnuts, hickories, and other trees and shrubs, it sports attractive, dark-green, shiny leaflets that tend to be oval, but tapering to the base and tip (most obvious on the leaflets near the end of the frond), and the leaflets closest to the stem are shorter and smaller than the leaflets near the tip. There are usually 5 to 11 leaflets on each leaf.

Prickly-Ash, or Toothache-Tree, often is shrubby. In my encounters with it, it hasn’t grown over five feet tall and yet it still is mature enough to bear fruit. However, one of my botanical guides (Yatskievych, Flora of Missouri) says it can reach up to 15 feet. Blossoms appear before leaves, in April and May, and while they are not very noteworthy to a passerby, they do attract several species of bees. The berries develop through late summer, starting as hard, green fruits. Mature berries are red to red-brown, with 2 to 5 in a cluster from a single flower and one or two seeds inside. 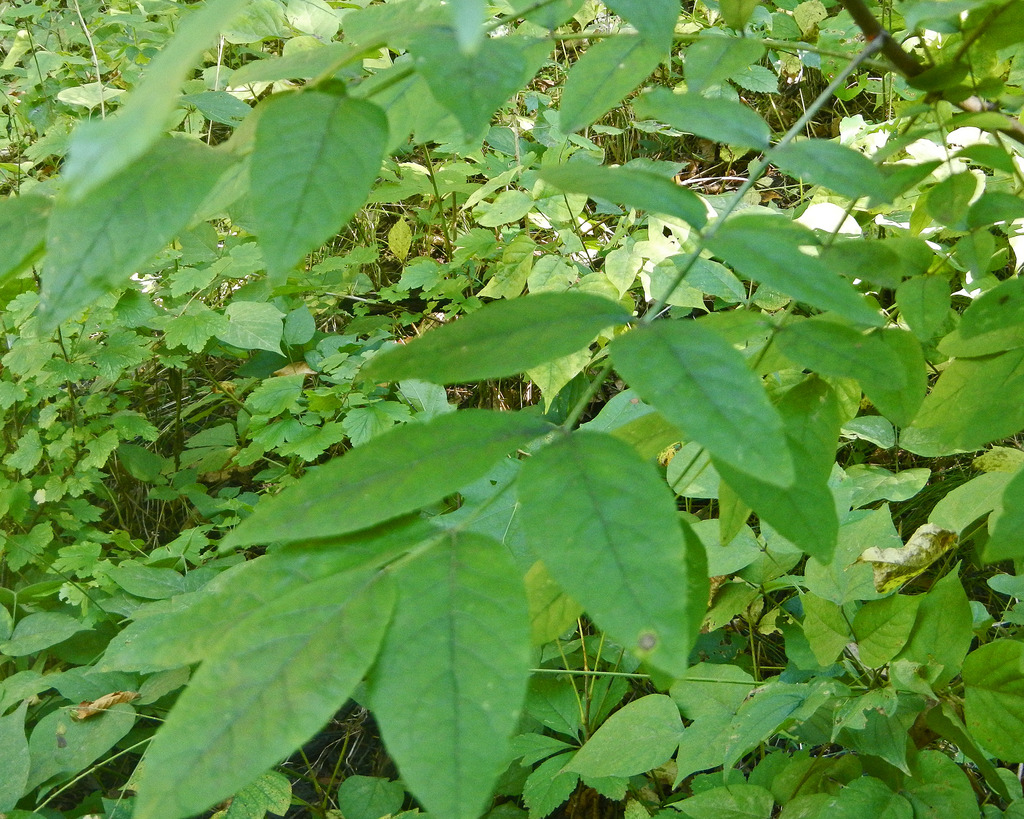 Photo 1: Close-up of a leaf showing eleven leaflets and demonstrating how the leaflets become bigger toward the tip of the leaf.

In winter, look for the thorns and smooth, gray to brown bark. If you think it might be Zanthoxylum, scrape the bark from a twig and smell it. It should have a citrus-like aroma, but more like the zest of lemon than the common produce citrus fruits. 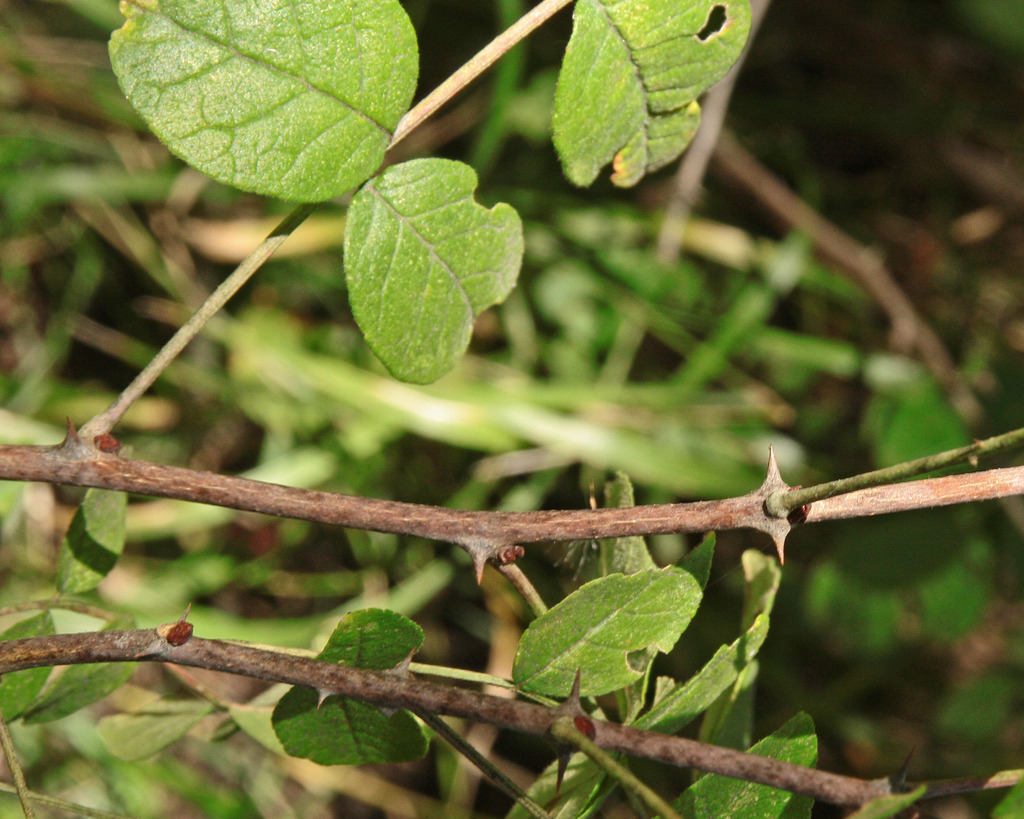 Photo 2: The red-brown leaf buds, thorns, and twigs are visible in this photo.

In fact, Prickly-Ash belongs to the same family as grocery-store citrus fruits – grapefruit, oranges, lemons, and limes. In the wild, it might be mistaken for a rose bush, especially in winter. The unique odor is the clincher, along with the absence of smooth red twigs. In the growing season the leaves and berries have this same tart citrus smell.

The shrub grows mainly in the Old Northwest and the Upper Midwest: Ohio, Indiana, the northern half of Illinois, much of Michigan, the southern half of Minnesota, most of Wisconsin, Missouri outside the Ozarks region, and the eastern and southern quarters of Iowa. Des Moines is near its northern limit in this part of the state. Prickly-Ash also grows about to Sioux City in the Loess Hills and Missouri Valley.

What’s with the regional name, “Toothache-Tree”? Native American herbalists taught settlers that chewing the live bark and berries numbed the pain from a toothache. As a youth in Decatur County and young adult in Greene County, I had the experience of chewing the berries, at first feeling the intense nerve stimulation in the mucous lining of the mouth along with the strong taste, only to have all sensation disappear for ten or so minutes. Eventually the nerves begin to tingle as the plant chemistry leaves the tissues.

Another outdoorsperson and renowned tracker, Tom Brown, Jr., wrote that he needed dental work, for which he took a supply of the berries. He rejected Novocain shots, numbing the area in his mouth with Prickly-Ash berries. When he detected a little tingling, Brown signaled the dentist to stop while he chewed more berries to extend the numbing effect.

In addition, the plant chemistry may have antifungal, antibiotic, and cytotoxic qualities. Antifungals are used against fungus infections, usually externally. Antiobiotics generally act on skin infections and, in some cases, internally, usually by eating them. (Other pathways into the body are known.) Cytotoxics selectively attack cancer and tumor cells. An article in the journal Phytotherapy Research (2001) reports that six chemicals have some effect on a type of human leukemia cells.

A study on the antifungal properties (Phytomedicine, 2005) found a wide range of effects on different fungi, including the yeast Candida albicans. The berries and leaves contained the highest amounts of active ingredients. The plant may have other medicinal properties as well, and it certainly was used by First Peoples for a wider range of complaints. However, pharmacological research has not yet examined these or reported them.

In its native habitat, Northern Prickly-Ash is a food host for the larvae of the Giant Swallowtail. The ripe fruit are eaten by quail, vireos, pheasants, cottontails, and chipmunks (NRCS Plant Guide 2001). I wonder if any of them experience the numbness. As mammals, cottontails and chipmunks surely do, if they take time to chew. 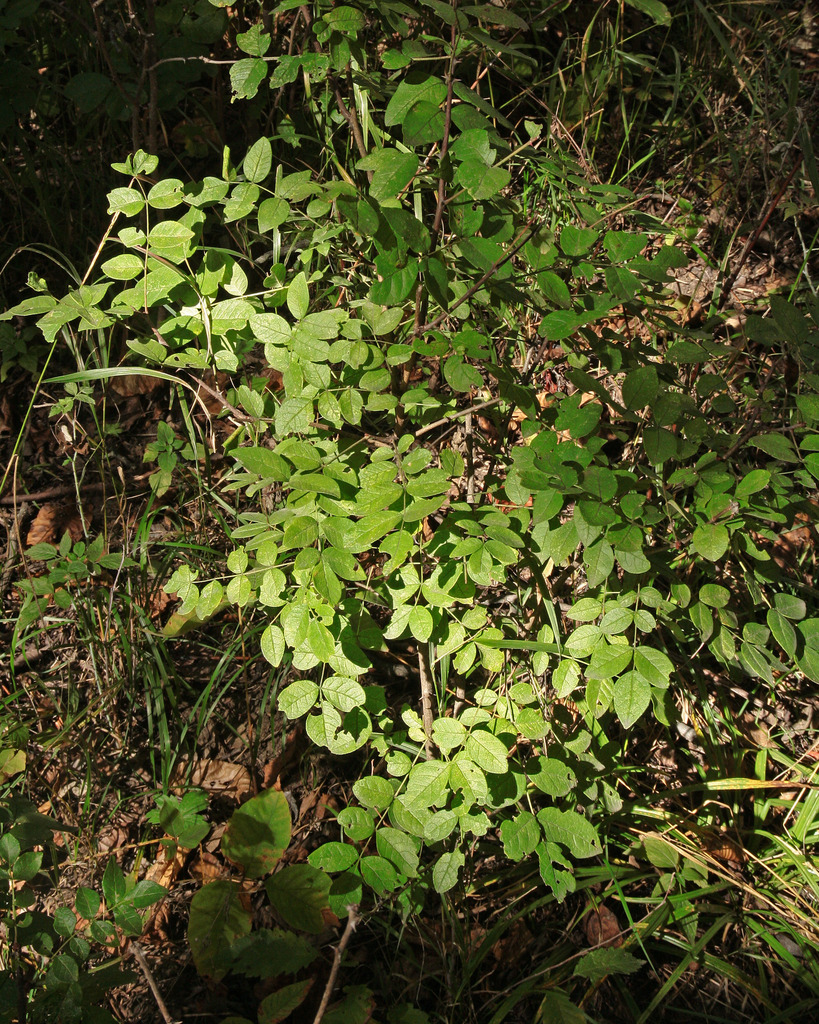 The overall appearance of a Prickly-Ash, only a few feet tall. This one grows in Guthrie County, in an isolated population.