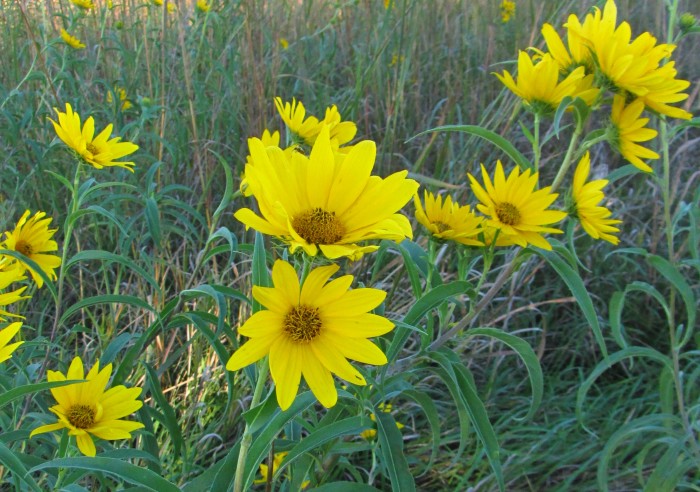 Today’s featured plant is native to most of the United States and Canada. In Iowa, it can start blooming as early as July and continues well into October. I took all of the enclosed pictures of Maximilian sunflower (Helianthus maximiliani) in mid-September at the Kuehn Conservation Area in Dallas County. Many plants still had unopened buds.

Sometimes called Maximilian’s sunflower, this plant is named after the naturalist Prince Alexander Philipp Maximilian, who described it and many other flora when he explored the American West during the 1830s.

Trigger warning for arachnophobes: this post also includes two pictures of spiders, which had spun their webs across Maximilian sunflower plants. I can’t remember seeing so many spider webs in a patch of native plants before. The coloration and the “bold, zigzag band of silk” running down almost all the webs suggest that these are female black and yellow garden spiders.

I struggle to distinguish many plants in the aster family with large yellow flowerheads. According to the Illinois Wildflowers website,

This plant has attractive foliage and flowers, and it is easy to identify because of the unusual leaves. These narrow leaves are longer (up to 12″) than the leaves of other Helianthus spp. in Illinois, and they have a distinctive light green or greyish green appearance because of their fine white hairs. Two native species, Helianthus grosseserratus (Sawtooth Sunflower) and Helianthus giganteus (Giant Sunflower), also have narrow leaves, but they are not covered with dense white hairs. Another species resembling Maximilian’s Sunflower is Helianthus salicifolius (Willow Sunflower), which occurs in the southern Great Plains. The Willow Sunflower has narrow leaves that are even longer than Maximilian’s Sunflower, but they are only ½” across or less.

Here’s a closer look at those leaves.

The several tall, leafy, unbranched stems of michaelmas-daisy or maximilian sunflower grow to a height of 3-10 ft. Leaves are long and narrow, up to 10 inches near the bottom and as short as 2 inches near the top. They are alternate, coarse and hairy, slightly wavy on the edges, often folded lengthwise, slightly toothed and very pointed. Numerous yellow flower heads grow on their own stalks terminally and from leaf axils. The flower head is up to 5 inches across, with 15-19 ray flowers, deeply veined and slightly toothed on the tip. The center is 1 inch or more across, green to dark brown.

Here are some plants blooming at the lower end of that height range.

The U.S. Department of Agriculture describes a wide range of uses for Maximilian sunflower plants. They are a pollen source for many insects, a food source for some birds and mammals, including grazing livestock, and a plant humans can use for erosion control, prairie restorations, ornamental purposes, or even “as a potential source of industrial raw materials” because of the natural rubber content. Traditionally,

Native Americans used parts of this plant as sources of food, oil, dye, and thread. Pioneers planted Maximilian sunflowers near their homes to repel mosquitoes and used the blossoms in bathwater to relieve arthritis pain. Sunflower seeds are eaten as snack items and sprinkled on salads and other foods.

In the middle of the field closest to the Kuehn Conservation Area’s visitor center, I was surrounded by masses of Maximilian sunflowers. Although the lighting wasn’t ideal, I wanted to include these photos to convey how many plants were blooming in every direction.

A Maximilian sunflower growing near some kind of purple aster:

Maximilian sunflowers with wild blue sage, also known as pitcher sage, which will be featured in a future edition of Iowa wildflower Wednesday:

Spiders hanging out in webs strung between Maximilian sunflower plants: