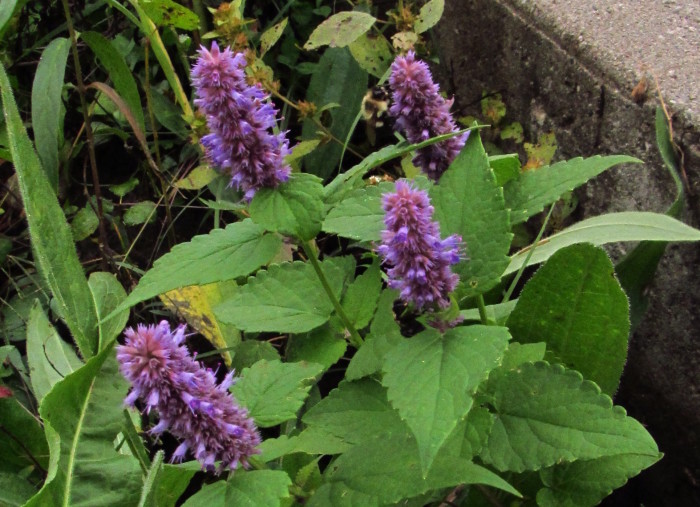 Today's featured wildflower was new to me until a few weeks ago. I noticed a handful of plants with purple flowers blooming in the patch along the Windsor Heights bike trail, behind the Iowa Department of Natural Resources building on Hickman Road. Several people in the Raccoon River Watershed Facebook group suggested they might be Blue giant hyssop (Agastache foeniculum), also known as anise hyssop. Leland Searles told me the easiest way to identify this plant is to crush a leaf. Sure enough, a strong anise smell confirmed the ID. This member of the mint family is native to most of Canada and some northern parts of the U.S., but Searles speculated, "If the plant is anise hyssop, I suspect someone [from the DNR] ordered a moist-medic seed mix from Prairie Moon in Wisconsin. The plant is endangered in Iowa mainly because two northern counties are at the limits of its range." It's rare in Illinois as well.

I enclose below several pictures of blue giant hyssop.

As a bonus, I also included two shots of what I believe to be the smallest white snakeroot plant in bloom I've ever seen. I noticed the tiny white flowers yesterday next to the curb of our street. Usually white snakeroot plants are a few feet tall before they start flowering. White snakeroot is prevalent in Iowa and won't hurt you, provided you don't drink milk from animals that have grazed on it. Before the connection between this native plant and "milk sickness" was understood, thousands of people (including Abraham Lincoln's mother) died on the American frontier.

For a botanically accurate description of blue giant hyssop foliage and flowers, check out the Minnesota Wildflowers and Illinois Wildflowers websites. Each plant has many small tube-shaped blue or violet flowers. I took these pictures in late September.

Blue giant hyssop plants with black-eyed Susans in the background. I took this picture yesterday, so most of the hyssop flowers are gone.

Blue giant hyssop is popular with a wide variety of bees. I have no idea what kind of bee was hanging out on this plant yesterday. It seemed rather dopey in the cool weather and let me get surprisingly close.