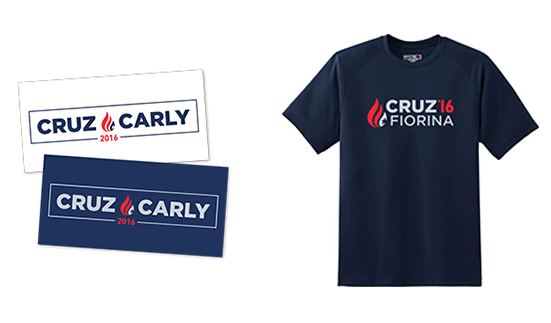 Needing a victory in Indiana's May 3 primary to have any hope of stopping Donald Trump from winning a majority of delegates before the Republican National Convention, Ted Cruz announced yesterday, "If I am nominated, I will run on a ticket with @carlyfiorina as my Vice President."

Many politics-watchers laughed at the idea of Cruz picking his running mate a day after distant third-place finishes in five primaries put him 400 delegates behind Trump. But Cruz has nothing to lose from the alliance, and neither does Fiorina.

Tuesday night and most of Wednesday, the political media conversation was all about Trump's crushing victories in five east-coast primaries. During his April 26 victory speech, Trump predicted he would win Indiana, where a major employer's decision to move jobs to Mexico plays into his key message about fixing the economy. At a rally the next day, Trump appeared alongside longtime Hoosiers basketball coach Bobby Knight.

Cruz needed to get his name in the news in a positive way. Aside from picking up a major endorsement from an in-state legend, choosing a running mate is about as newsworthy as campaign announcements get.

Mr. Cruz’s polling in Indiana showed him down double-digits in Indiana last week, according to two Republicans familiar with the findings. He has edged closer to Mr. Trump in nightly surveys this week, but remains behind.

“If the election were held today, we’d lose but not get crushed,” said a Republican familiar with Mr. Cruz’s polling.

What is striking, though, is that Mr. Cruz decided to tap Mrs. Fiorina even after his own surveys indicated she would offer only a modest boost. In Indiana and subsequent states, Mr. Cruz’s campaign tested the impact if Mr. Cruz named Mrs. Fiorina as his running mate and found it was only worth “a couple of points,” said a Republican briefed on the polling results. “Voters like her. They don’t love her,” said this Republican, who insisted on anonymity to discuss the decision-making.

Trump might not be stopped even if he loses Indiana. With a win there next Tuesday, the front-runner almost certainly will pick up a majority of GOP delegates before the national convention. Cruz has nothing to lose.

"Look at that face" and Trump's other insulting comments about Fiorina last summer fit a long pattern of sexist remarks. Even though advisers had reportedly warned him "that his treatment of Mrs. Fiorina would be perceived as a test of his discipline for the general election," Trump couldn't help himself. Assuming he continues to feed that narrative over the next couple of months, the front-runner will indirectly boost Cruz's case to GOP delegates at the national convention: Trump is too alienating to women to be electable. Of course, he can only make that argument if Trump has fewer than 1,237 delegates locked up before delegates arrive in Cleveland.

The Cruz campaign's announcement (enclosed below) highlighted Fiorina's record as a "groundbreaking executive and the first woman to lead a Fortune 50 company." At a joint appearance in Indianapolis yesterday, Cruz mentioned that the former Hewlett-Packard chief executive had "shattered glass ceilings." In a campaign ad released immediately after the announcement, Cruz asserted that presumptive Democratic nominee Hillary Clinton would be "terrified" to run against Fiorina.

Fiorina could help Cruz in California.

As Dan Guild explained here, even a win for Cruz in Indiana won't be enough to keep Trump from gaining a majority of GOP delegates unless the Texas senator also wins the June 7 California primary or keeps the margin close. While Fiorina didn't win her 2010 U.S. Senate race in California, having appeared on a statewide ballot makes her a better surrogate for Cruz there than any of his other endorsers.

Even if the Cruz-Carly ticket fails to stop Trump from becoming the GOP nominee, as appears likely,

Fiorina and Cruz are leaving it all on the field.

Some Republican strategists acknowledge publicly and many more admit privately that Trump will not be able to defeat Clinton in enough states to win the presidency. At best, the GOP can hope to minimize losses in U.S. House and Senate races.

Since endorsing Cruz shortly after Trump swept most of the South on Super Tuesday, Fiorina has campaigned for the Texas senator in various states. Putting herself on a theoretical ticket with Cruz is an even bigger commitment. Josh Marshall wondered why Fiorina would agree to this possibly hopeless gesture, but Republicans won't blame her if Cruz falls short in the primaries. More likely, they will remember later that she did what she could to stop Trump.

Cruz's stature in his home state doesn't appear to have suffered because of his presidential bid. He is young enough to run again in four years, claiming to be the conservative who could have saved the party from electoral disaster in 2016. Despite the failure of Mike Huckabee and Rick Santorum to gain any traction in this cycle's presidential race, the past nominations of Bob Dole, John McCain, and Mitt Romney show that Republican primary voters have frequently been open to supporting the guy who's "next in line."

Any comments about the GOP race are welcome in this thread. Collectors of political memorabilia are advised to pick up CruzCarly merchandise while they still can.

P.S.- Although Fiorina has objected to suggestions that she was campaigning for president in order to become someone else's running mate, one wonders how early Cruz and Fiorina began discussing a possible joint ticket. Keep the Promise I, one of the super-PACs created to support Cruz, donated $500,000 last year to the Carly for America Committee, a super-PAC supporting Fiorina. Keep the Promise I spent most of its resources on independent expenditures for Cruz or against rival GOP candidates, but the transfer to the pro-Fiorina super-PAC was still among its significant expenditures.

Presidential candidate Ted Cruz today announced that former Hewlett-Packard CEO Carly Fiorina would be his Vice Presidential running mate. As a groundbreaking executive and the first woman to lead a Fortune 50 company, Fiorina brings a record of innovation and tremendous leadership to the Cruz campaign. An outsider to politics, Fiorina adds a fresh perspective to the difficult challenges America faces and has a solutions-oriented approach that is desperately needed in the federal government.

“In choosing the person I believe would honorably and faithfully serve in the office of the Vice President – the person who under our Constitution could ascend either temporarily or permanently to the presidency – there must be a higher criteria, and that criteria must be this: will that person keep the faith and trust of the American people?” Ted Cruz said. “For all the enormously impressive qualities I saw in others whom I considered for the office of the Vice Presidency of the United States, I found a clear choice:

“One who has never been afraid to stand up to the insider status quo. Who knows the principles of the Declaration of Independence and the Constitution because this leader has lived them – a life dedicated to the dignity of work, of our right to pursue our wildest aspirations – and to help others do the same. And a leader who understands that power never has and never will come from the government – here in the United States it comes from the people.

“Who respects the people, who has worked alongside them, and who will serve them with an unbreakable purpose of protecting every one of their rights – and making sure that the America we hand to our kids and grandkids is better than the one before us today.

“For the 13 months of this race, there has been a proven, consistent, courageous fighter. A fighter who terrifies Hillary. And who will do the same to our enemies. And that’s why I am proud to announce Carly Fiorina as my Vice Presidential running mate.”

“Ted Cruz is a constitutional conservative who has made enemies in both parties standing up to the bipartisan corruption in Washington,” said Carly Fiorina. “He has fought to change the system. He kept his word to the people of Texas, and I know, if elected, he will keep his word and bring back American jobs, defend our nation, and protect our constitutional freedoms.

“This is why we fight. Join us. And let's elect Ted Cruz the next President of the United States.”