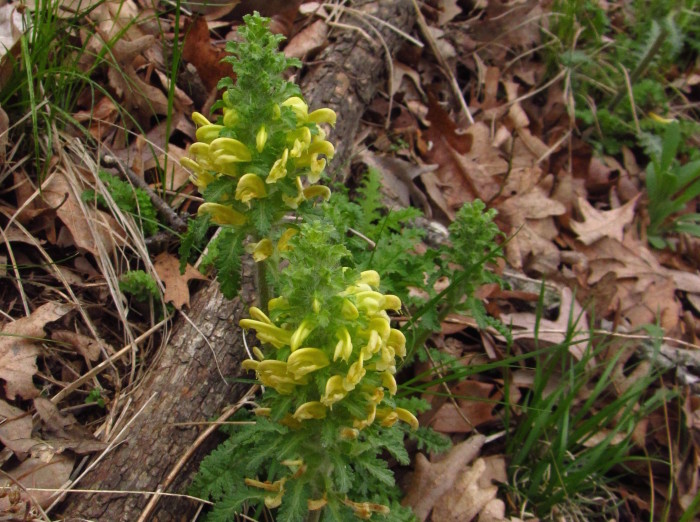 Wood betony (Pedicularis canadensis) is native to most of North America east of the Rocky Mountains, but I'd never seen this wildflower until Iowa naturalist and photographer Eileen Miller showed it to me during my first-ever visit to Dolliver Memorial State Park (Webster County) last spring. The plants were only starting to bloom, and by the time I got back to the park, they were past their peak.

This year I managed to get better shots of wood betony, also known as Canadian lousewort. It's probably still flowering, so if you want to find it, take the trail that leads to Dolliver's unusual "Copperas Beds" sandstone formations, then continue across a creek until the trail eventually turns right, going up stairs the Civilian Conservation Corps built during the Great Depression. Many wood betony colonies are growing on either side of that trail as it goes uphill.

I enclose below photographs of wood betony and a couple of bonus shots of those Copperas Beds, which have minerals and petrified wood embedded in the sandstone.

The Illinois Wildflowers and Minnesota Wildflowers websites have botanically accurate descriptions of wood betony. Once you've seen it, you will easily recognize this distinctive flower again. The alternative name “lousewort” refers to a erroneous belief that livestock grazing on pastures containing the plant would become infested with lice. Even the genus name “Pedicularis” is derived from the classical word Pediculus, meaning “a louse”. However, the European herders that named the plant were probably not aware that louseworts were, like lice, parasites! Technically, wood betony is a hemiparasite, a plant that is partially dependent upon other plants as a source of water and nutrients. Wood betony accomplishes this through haustoria, tissue connections that develop between the roots of the wood betony and its host plants. The precise identity of lousewort’s host plants remain uncertain, as might be expected from a wide-ranging species that occurs in diverse habitats. A number of plant species have been reported as hosts, including native trees (especially oaks) and native prairie grasses. Unlike plants that are completely parasitic, wood betony can uptake some water and minerals through its own roots. Wood betony also has green leaves containing chlorophyll, so the plants make their own carbohydrates through photosynthesis. In tallgrass prairies, the hemiparasitic wood betony may actually promote plant diversity; through parasitism, this species apparently hinders the growth of competitive tall grasses, allowing the shorter and less vigorous bunch grasses and forbs to dominate patches of prairie.

Wood betony flowers start blooming near the bottom of the "spike" at the top of the stem.

A pussytoes plant is blooming to the left of these wood betony plants. Pussytoes are also prevalent along the trail that goes up the old steps at Dolliver.

I like the spiral patterns in these top views of wood betony plants.

A unique facet of the sandstone formations at Dolliver are the "Copperas beds." The towering 100-foot bluff on Prairie Creek is a cross-sectional view of the ancient river bed that is over 150 million years old. Over the ages, the erosive power of Prairie Creek uncovered this unique feature. The porous nature of the sandstone has caused many minerals such as calcite and sulfur to dissolve as the water seeps through. As the water evaporates, the mineral deposits are left behind. You can see many of these deposits in the sandstone cliffs, as well as petrified logs and sticks.

Here are a couple of pictures I took of the cliff last year.