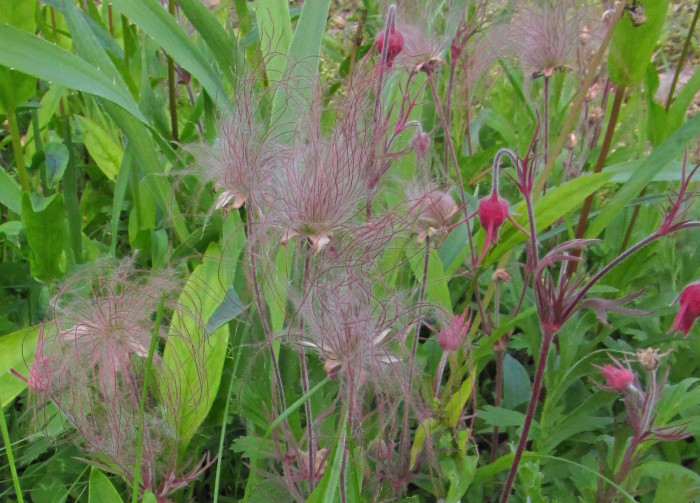 Of the approximately 120 kinds of wildflowers Bleeding Heartland has featured since March 2012, none look more like a Dr. Seuss creation than Geum triflorum.

Native to most of western North America and the upper Midwest, these plants are among the earliest to bloom in prairie landscapes. They can continue to produce flowers into the summer. However, the common names prairie smoke and old man’s whiskers are drawn from the appearance of Geum triflorum seedpods (technically achenes)–not from the pink or pale red blossoms on the flowering stalks.

I took the pictures enclosed below in mid-May along the Meredith bike trail in Des Moines. Several colonies of these unusual plants can be found along the southern edge of the trail, just west of where it passes under SW 9th Street.

The Illinois Wildflowers and Minnesota Wildflowers websites provide detailed, botanically accurate descriptions of prairie smoke foliage, flowers, and fruit. The plant is also sometimes known as purple avens, but red or pink blossoms seem much more common than purple ones.

Prairie smoke flowers don’t look very dramatic. In fact, at the peak of blooming, they look like buds that haven’t opened yet. The Illinois Wildflowers site says bumblebees that pollinate these plants “are strong enough to force their way into the flowers” seeking nectar.

Charlie McDonald writes that this plant “spreads by rhizomes to form large clumps.” A couple of views of the colonies growing along the Meredith trail between downtown Des Moines and Gray’s Lake:

The website of the Lady Bird Johnson Wildflower Center at the University of Texas explains, “After fertilization, the bell-like flowers turn upward and plumes begin to grow from the pistils, ready to be caught by the wind or a passing animal and the seed so dispersed.”

Growing prairie smoke is easy, as it’s tolerant of most any soil type, including sandy and clay soils. However, it does prefer a well-draining soil enriched with organic matter above all else. While prairie smoke can also tolerate partial shade, the plant performs much better in full sun. It is usually planted in spring but fall planting can also be done. […]

Prairie smoke is considered a low maintenance plant. In fact, there is little involved with prairie smoke care. While it should receive adequate moisture during spring growth, especially those newly planted, prairie smoke prefers drier conditions during the remainder of the year, as it’s quite drought tolerant in its native habitat. While the plant typically self-seeds or spreads underground, you can save the seeds for growing elsewhere or divide the plant clumps in spring or fall. Allow the seed heads to remain on the plant until dry and golden colored before harvesting for later planting. You can also use them in dried flower arrangements by cutting entire stems and hanging them upside down in a warm, dry location.

A few closer looks at the feathery plumes that give this plant its common names: