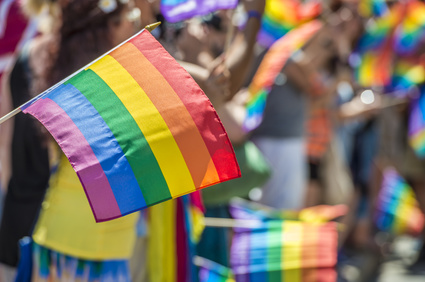 In the aftermath of a massacre: Grief, pride and hope for a new day

“I don’t understand for the life of me why someone would go to a place where people are getting together to have a good time and be happy and enjoy life would bring terror with them,” the bartender said as made a gin and tonic at the Blazing Saddle booth early Sunday afternoon at Capitol City Pride. “I don’t understand. It is just contrary to what I believe about humanity. It’s just awful.”

McNatt was just one of thousands at the annual gay pride event in Des Moines’ East Village who grieved while trying desperately to make sense of the murder of 49 men and women and 50 wounded at a gay bar in Orlando by a lone gunman killed by police in a gun fight.

Sunday’s steaming weather appeared to keep attendance down for the eight-block parade that has become a staple event for the Des Moines gay pride weekend, but one couldn’t help but think that events in Orlando made trying to celebrate pride too difficult for many of them.

As politicians pointed fingers at each other over whether the issue of the Orlando massacre was about religiously motivated terrorism or the refusal of this country to control the sale of assault weapons, those who still live with discrimination daily wondered out loud why no one was talking about them.

“If it had been 50 Christians, 50 women or 50 kids who were murdered last night, there would be such an uproar,” Eric Gieran, who moved to Des Moines a year ago with his husband of 11 years, Charlie Stroppel, said. “Social media, the media would be yelling a call to war.”

Gieran and Stroppel said they watched the media coverage on Sunday morning through a steady stream of tears. They came away with the distinct feeling that the coverage downplayed the location of the assault and the likely victims.

“To me, it showed the viewpoint that somehow, someway we deserved this,” Gieran said.

Tee Porter, who moved to Iowa and married her wife, Knecole, said that she still feels the stings that come when people discover she is lesbian.

“At my workplace, everything was fine until they found out I had a wife,” Porter, a Philadelphia, PA native, said. ”They didn’t come out and say they hated me, but their actions indicated clearly they were against gay people. If I was ok before they found out I was gay, why is there a difference now?”

At the same time, Porter has never regretted moving to Des Moines. “It is way more accepting,” she said. “I honestly don’t think most people care about it.”

Steve Jackson, who moved to Des Moines with his partner in 2014, said that’s not true everywhere – particularly in Mississippi where he came from.

“Down there, you become one who is not like them. You are immediately ostracized and you can’t do everything you should be able to do,” he said. “I’ve had plenty of experience where I haven’t been served at a restaurant or hotel, denied basic services because they don’t believe in treating you equally. Up here it is much more relaxed.”

Stroppel and Gieran, who moved to Des Moines from Palm Springs, CA, also said their lives improved by moving to Des Moines.

“I am more comfortable here than I was in New York City,” Stroppel said.

To a person, they agreed that they don’t expect the hatred or the veiled discrimination to stop. Several said that human nature always includes an element of hate.

“No, it won’t stop because someone always wants something to hate on.” Draylih Scott said. “There will always be someone against you because of what you are doing. Not ever going to end.”

McNatt, who regularly tends bar at the Roof Top and Street Car 209, also was pessimistic about how soon the feelings of hate and the push to discriminate against gays and lesbians would last.

“Suffering is a condition of the human experience,” he said. “I believe that a majority of mankind is good and at times like this you see the good that comes out of so many. But, it takes a long time. It’s like getting over a virus.”

But that also doesn’t mean, they said, that they have any intention of backing down even when facing continued hate and violence against them.

But Stroppel put it more simply.

“We aren’t scared,” he said. “This will just make us stronger.”