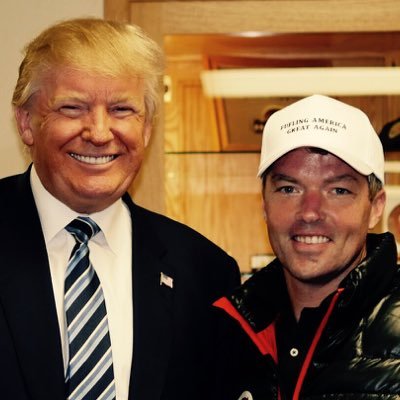 Branstad runs Matchpoint Strategies, a "Public Affairs and Fundraising Firm 'making the impossible happen' for a wide range of clients - corporations, trade associations, governments and non-profit advocacy groups." He was state director for the pro-ethanol group America's Renewable Future before this year's Iowa caucuses, spending hundreds of thousands of dollars on direct mail and advertising. A large portion of the money targeted Ted Cruz, at the time the front-runner with Iowa Republicans.

America's Renewable Future did not endorse a presidential candidate, but Alberta quotes Republican sources who say Eric Branstad "spoke on Trump's behalf" at his precinct caucus in Des Moines on February 1. In what some viewed as a "de facto" endorsement of Trump, Governor Branstad called on Iowans to defeat Cruz in mid-January. Since Trump locked up the delegates needed to win the GOP nomination, Branstad has repeatedly said he is fully behind the presumptive nominee. He also downplayed Trump's recent comments about so-called "Mexican" Judge Gonzalo Curiel.

Eric Branstad's job will be more important than that of most state campaign managers for Trump. Daily Kos user ncec1948 gamed out various November outcomes here. Every winning scenario for Trump relies on Iowa's six electoral votes. I enclose below excerpts from ncec1948's analysis but recommend clicking through to read the whole post. Most electoral vote projections currently list Iowa as a tossup, though some forecasters see our state leaning Democratic. Iowans have favored the Republican only once in the last seven presidential elections, when President George W. Bush barely defeated John Kerry here in 2004.

With the governor's son running Trump's effort here, down-ticket Iowa Republicans who would prefer to distance themselves from the nominee have an even more difficult balancing act ahead.

UPDATE: The Trump campaign confirmed the hire when contacted by the Des Moines Register's Jason Noble. Eric Branstad told Noble, "I want to work with the campaign and share with Iowans what I’ve gotten to know, and that is how great of a leader and person Mr. Trump is." For his part, the governor said he was late to learn his son was under consideration for the job and "never really played a role" in helping him land the position.

Noble advanced the story while giving credit to the National Review for breaking the news about the Branstad hire. In contrast, Radio Iowa's O.Kay Henderson reported the story without attribution or a link to Alberta's post.

From a post by Daily Kos user ncec1948, "Why the Numbers Show Donald Trump's Path to Victory is Unlikely":

We see the 2000 election as a benchmark, for two reasons. First, it was remarkably close—decided by 0.6 percentage points of the popular vote and five electoral votes. Second, it marked the first evidence that the South (with the exception of Florida, North Carolina, and Virginia) was closed off to Democratic presidential candidates. After all, Bill Clinton won Arkansas (his home state), Kentucky, and Louisiana in 1996—all states that are now considered part of the Republican base.

In 2000, seven states were decided by a margin under 2 percentage points. Today, in an era marked by extreme polarization, only four of those states—Florida, Iowa, New Hampshire and Wisconsin—are top targets this November. Minnesota leans Democratic and both New Mexico and Oregon are now solidly Democratic. Simply put, the competitive map has shrunk significantly. [...]

Our calculations show 12 states that will be the focus of this election, with 7 true toss-up states. [...]

Iowa: George W. Bush won Iowa in 2004—the last time a Republican carried the state. Still, his margin was 1.8 percentage points below his national advantage. The challenge for Democrats against Trump is winning over the large number of socially conservative rural and small-town voters who have been leaving the Democratic Party. Although midterm election results are typically not indicative of presidential election performance, Republicans scored massive victories in the gubernatorial and U.S. Senate contests in 2014. Should Clinton's share of the white vote drop, as some polls suggest it will, this could be fertile ground for Donald Trump.