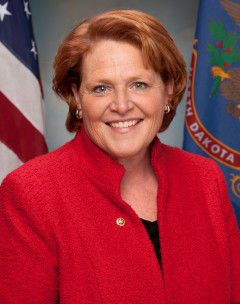 Heidi Heitkamp cancels what might have been an awkward Iowa appearance

U.S. Senator Heidi Heitkamp of North Dakota was supposed to be the keynote speaker at tonight's Iowa Democratic Party Hall of Fame event in Des Moines. However, the party announced last night the senator would be unable to attend "due to a scheduling conflict." At this writing, the Iowa Democratic Party has not responded to my request for further details on the cancellation.

Heitkamp's planned Iowa debut could hardly have come at a more awkward time. Among the least progressive Senate Democrats on a number of issues, Heitkamp was noticeably absent this week as some 40 senators took part in a filibuster led by Senator Chris Murphy of Connecticut to force a vote on gun control measures. In 2013, she was one of just four Senate Democrats "who sided with the vast majority of Republicans to shoot down a bipartisan proposal to strengthen and expand background checks for gun purchases." At the time, she said she opposed the bill drafted after the Sandy Hook mass shooting because "the focus should be on mental health issues, full and accurate reporting into the NICS database and ensuring that we are prosecuting criminals in possession of or trying to possess firearms. This conversation should be about what is in people’s minds, not about what is in their hands."

In numerous social media postings this week, Iowa Democratic activists have criticized Heitkamp's history of being a reliable vote for the National Rifle Association.

Even before last weekend's massacre at the Pulse gay club in Orlando drew attention to the availability of assault weapons designed for use in military combat, I was expecting protests outside the hall and some heckling during Heitkamp's speech, because of her ties to the fossil fuel industry. Opponents of the proposed Dakota Access (Bakken) pipeline have objected to giving Heitkamp such a prominent role in what is usually the Iowa Democratic Party's second-largest event of the year. I enclose below a letter to the Des Moines Register by Wally Taylor of the Sierra Club.

From Wally Taylor's letter to the Des Moines Register, published on June 14:

The Iowa Democratic Party’s Hall of Fame Celebration has turned into a Hall of Shame Celebration. [...] While advocates for the environment and limitations on the use of eminent domain have been fighting valiantly to stop the Bakken pipeline that would carry crude oil from North Dakota through Iowa, Sen. Heitkamp has been an enthusiastic supporter of the oil industry and oil pipelines.

The fracking process used to extract the oil in North Dakota releases methane, an even more potent greenhouse gas than carbon dioxide.

Democrats have been leaders in the fight to stop climate change. This is especially true in Iowa, where Democrats have supported our robust wind and solar energy industry. Democrats in Iowa can be proud that they are on the right side of history. By promoting Sen. Heitkamp, Iowa Democrats are giving tacit approval to her support for the fossil fuel industry.

Iowa Democrats should instead present someone who is a leader in protecting the environment and who will inspire Iowans with fresh ideas that will lead to energy security and protect the planet.

— Wally Taylor, Marion, chair of the Iowa Chapter of the Sierra Club