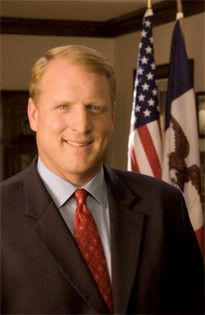 Where are they now? Chet Culver edition

Culver will focus on fundraising and promotion and will report to YMCA CEO Dave Schwartz, who will continue to oversee operations and the long-term vision of the organization, YMCA officials said. [...]

The YMCA is in particular need of fundraising help. The organization is trying to gather the roughly $9 million needed to finish an aquatic center at the new Wellmark YMCA. The unfinished pools, which were billed as a centerpiece of the downtown branch, sparked a rocky patch for the YMCA.

Former Y president and CEO Vernon Delpesce resigned in January after the YMCA struck out three times to secure grants to complete the aquatic center.

Those grants fell through because the YMCA "was passed over twice for federal new market tax credits and once for state brownfield tax credits," leading to a major shortfall in the capital campaign to build the new downtown facility.

Des Moines Cityview's Civic Skinny was first to report the Culver hire earlier this month, having noted in February that some of the former governor's friends "are lobbying hard to get him named head of the YMCA of Greater Des Moines."

Rick Tollakson told Aschbrenner the Y's executive search committee decided to hire two people to handle different aspects of Delpesce's former position. They chose Culver as president because they "valued [his] experience raising money for political campaigns, his connections around greater Des Moines and his passion for the YMCA."

“I’m definitely ruling it out for now,” Culver says. “I couldn't be more excited about this next chapter.”
Culver says unlike in politics the new job will enable him to be present for his teenagers Clare and Jack.