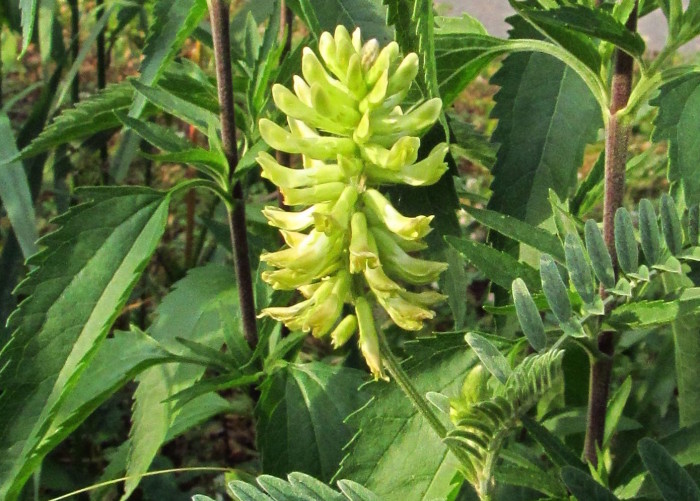 Canada Day is coming up this Friday, July 1, so the time seems right to feature a plant named for our neighbor to the north. Canada milkvetch (Astragalus canadensis) is native to most of North America. Sometimes just called milk vetch or Canadian milk vetch, it "makes a great garden plant and is adaptable to any reasonably well-drained soil, fixing nitrogen into the soil and providing erosion control," according to the Minnesota Wildflowers website.

I saw these "robust" plants for the first time last week in the prairie patch along the Windsor Heights bike trail, behind the Iowa Department of Natural Resources building on Hickman. You may have to hunt for them, because they are tucked away among taller plants, including tons of black-eyed Susans and quite a few yellow or gray-headed coneflowers.

At the end of this post, I've enclosed two pictures of another wildflower I recently discovered on disturbed ground just west of where the Meredith bike trail passes under Fleur Drive in Des Moines. A friend tentatively IDed these pretty little flowers as Canada frostweed (Helianthemum canadense), a native plant that was new to me. However, according to the Iowa DNR's John Pearson, these are Moth mullein (Verbascum blattaria), an "uncommon non-native" found across much of the U.S. and Canada.

As usual, the Illinois Wildflowers and Minnesota Wildflowers websites are good resources for botanically accurate descriptions of Canada milkvetch foliage, flowers, and fruit. The leaves caught my eye; I hadn't noticed anything like them before in the Windsor Heights prairie restoration.

The Illinois Wildflowers site explains that these plants have a "whorled raceme" producing "about 75 creamy flowers, which may have yellow or green tints." Canada milkvetch flowers start opening from the bottom of the raceme and work their way up.

Here are some other views of Canada milkvetch growing among black-eyed Susans.

Canada milkvetch plants, with flowers still opening near the top and fruit pods forming near the bottom.

Finally, two pictures of Moth mullein, a non-native plant growing in some large colonies on either side of Meredith bike trail in Des Moines, not far west of Gray's Lake.