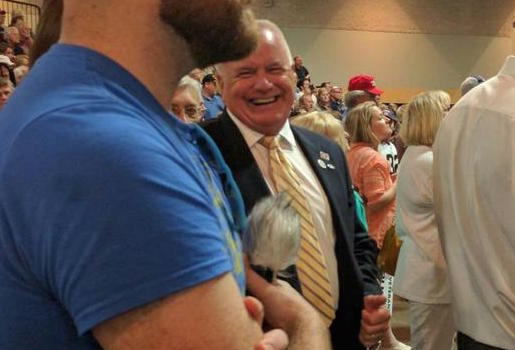 My Experience at the Trump Rally

Carrie Clogg shares her disturbing experience at Donald Trump’s August 5 rally in Des Moines–quite unlike what happened to Pete McRoberts when he quietly held up a copy of the U.S. Constitution at the same event. -promoted by desmoinesdem

On Friday, August 5, I attended the Iowa Arts Summit in Des Moines. When I arrived at Wells Fargo arena that morning I noticed the parking lot was full of tv vans and I quickly learned that we would be sharing the building with a rally for Donald Trump. I am a Democrat and I strongly believe in the power of hearing both sides. I have attended events for both Democrats and Republicans throughout my life, but have never experienced anything like this. Here is an exact account of my experience.

The only non-truth you heard on the WHO TV Channel 13 News story came from me. The person who threatened to arrest me was not a secret service agent. I know this because of the attached picture and I know that secret service agents are not allowed to wear buttons supporting a candidate and this man was (the man wearing the yellow tie).

I went to the rally with some friends because we know how lucky we are as Iowans to have the opportunity to hear directly from political candidates from all parties. We were quietly standing in the back listening. We did not say a word to each other or make any sort of disturbing gestures or noises. As soon as Trump appeared, 3-4 men in suits started closing in on us. We continued to simply listen.

The man with the yellow tie approached me and said, “Are you a Trump supporter?” I said, “No, but I am hear to listen to what he has to say.” He then said, “If you cause a problem, I will have you arrested.” I asked him why he thought I would do something like that and he just kept referring to having me arrested. At that point, my friend and I quietly left and were followed. The entire experience was very scary and disturbing to say the least.

One other thing I would like to point out. I was asked by a young man if I would like one of his “Veterans for Trump” signs. I replied, “But, I am not a veteran.” His response was, “Its ok. We are representing all veterans today.” So I know for a fact a large percentage of people holding up those signs are not veterans. I am sure this type of sign distribution happens on both sides. Either way, I do not think it is right.

I am still shaken up by what I experienced on Friday. And I have heard the arguments…this person was just keeping everyone safe, put on your “big girl pants” or “what did you expect?” You know what I expected? To be able to listen. I also expected that people would treat others with at least basic respect. That is not what happened. I spoke to the news because I do not agree with what I experienced and I am sincerely scared of what I witnessed. We should all be scared.

NOTE from desmoinesdem: Trump’s Iowa campaign director, Eric Branstad, said the man in the dark coat and yellow striped tie “was not a volunteer or staff member of ours,” adding “I believe he is secret service” because “he looks like he is pinned.” Multiple Iowans who have worked events with Secret Service say no agent would wear a pin supporting a political candidate. I am actively seeking other Iowans’ reports about interactions with Secret Service or those presenting themselves as such at Trump rallies.

UPDATE from desmoinesdem: Thanks to the reader who noticed that man in the third photo appears to be Chris Hupke, who identifies himself on Facebook as “Senior Advisor at Donald J. Trump for President.”

Amy Rubel, who in an interview with WHO-TV defended the conduct of Trump’s supporters who hassled Clogg.

Trump supporters wearing a shirt that was popular with some rally attendees: