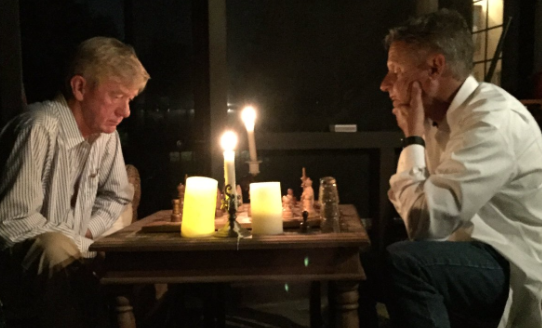 Iowa among the target states for Libertarian candidate Gary Johnson

Libertarian presidential nominee Gary Johnson has begun airing radio commercials in Iowa. I heard some of the spots on stations in the Des Moines market over the weekend and will update this post with full transcripts if I can record them. Daniel Strauss reported for Politico on August 26 that the Libertarian candidate "is spending $806,195 this month on radio ads in Colorado, Iowa, New Hampshire, New Mexico, Oregon, Utah and Wisconsin."

A second ad is Johnson arguing against a two-party system.

“Google me, 60 percent of you have said you want another choice in 2016 and now you have one in me,” Johnson says in the ad. “We the people have a chance to do something in 2016 that may not come again in our lifetime. We have a legitimate chance to elect one of our own to the highest office in the land.”

Iowa may be an appealing place to advertise because air time is less expensive here than in many other swing states.

Super-PACs supporting the Libertarian ticket have produced some television and radio commercials, but I haven't seen or heard any of those yet. AUGUST 31 UPDATE: This Purple PAC ad is on the air in the Des Moines market. I've added the video below.

The early advertising push is designed to boost Johnson's support in national polls to at least 15 percent. The Presidential Debate Commission has said candidates must hit that threshold to be included in the three debates featuring presidential nominees and the one vice presidential debate.

No Libertarian presidential candidate has ever won more than 1 percent of the vote in Iowa; I compiled our state's results for all previous tickets here. In the last three public polls of likely Iowa voters, Johnson had support from 12 percent, 6 percent, and 12 percent of respondents in a four-way race against Democrat Hillary Clinton, Republican Donald Trump, and Jill Stein of the Green Party.

The Libertarian Party of Iowa has a far stronger organization than any other third party in this state. In addition to Johnson and vice presidential nominee Bill Weld, Libertarian candidates are running for Iowa's U.S. Senate seat, for the U.S. House in the third Congressional district, for six Iowa Senate seats, and for twelve Iowa House seats. Some of these candidates already have yard signs and other campaign materials.

In contrast, the Green Party did not nominate any candidates in Iowa other than Stein and her running mate Ajamu Baraka, even though access to the general election ballot is relatively easy here.

Johnson's first rally in Iowa this election cycle is scheduled for this Saturday, September 3, at the Grand View University Johnson Wellness Center, 200 Grandview Avenue in Des Moines. Doors open at 1 pm. Stein will headline a Green Party rally at the Iowa State Capitol in Des Moines on Sunday, September 11.

Purple PAC ad for Gary Johnson, "The honorable choice for a change":