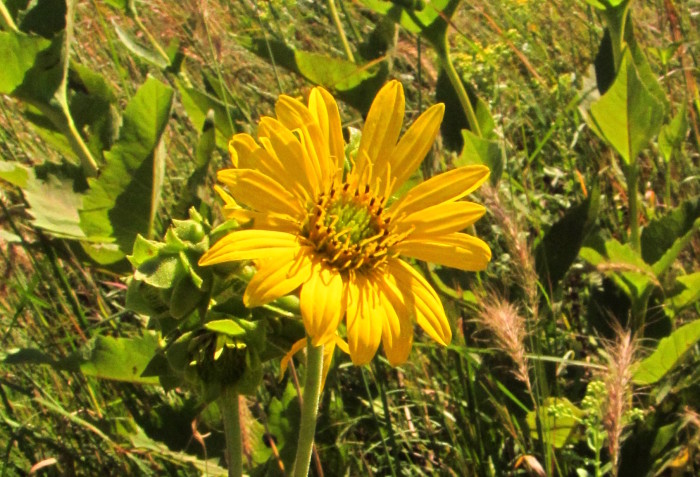 Since last Wednesday's post featured a woodland plant with blossoms that are easy to miss, I thought it would be fun to go to the other end of the Iowa wildflowers spectrum today. Rosinweed (Silphium integrifolium) grows in prairie habitats in most of the plains and Midwestern states. These tall plants with large yellow flower heads are bound to catch your eye when they are blooming.

Rosinweed (sometimes called wholeleaf rosinweed) is one of four Silphiums. Bleeding Heartland has profiled two of the others: compass plant and cup plant. The last Silphium is prairie rosinweed, also known as prairie dock. The website of the Friends of the Eloise Butler Wildflower Garden in Minnesota has a handy comparison chart.

I took the enclosed pictures at either the Neal Smith National Wildlife Refuge near Prairie City (Jasper County) or at Whiterock Conservancy near Coon Rapids (Carroll County). You should be able to find plenty of rosinweed blooming at either location over Labor Day weekend.

For botanically accurate descriptions of rosinweed foliage and flowerheads, check out the Minnesota Wildflowers, Eloise Butler Wildflower Garden, or Illinois Wildflowers websites. The last notes that while rosinweed looks like a sunflower species (Helianthus), "its disk florets are sterile and ray florets are fertile. The Sunflowers, on the other hand, have fertile disk florets and sterile ray florets."

The large yellow flowerheads on some prairie natives resemble each other. The trick to distinguishing these plants is to look at the leaves: rosinweed plants have "rough opposite stalkless leaves, most with tiny teeth." A couple of closer looks:

What most people would call petals on rosinweed flowers are ray florets, and they emerge first when the plant starts to bloom:

As the flowerhead gets past its prime, the disk flowers in the center tend to fall off before the ray florets drop:

You can see in these shots why rosinweed looks like a sunflower to casual observers:

Gardeners looking for a striking plant may want to consider rosinweed. The Illinois Wildflowers site explains,

Rosinweed is rarely bothered by disease and is easy to grow. It matures more quickly than many other members of the genus, such as Silphium terebinthinaceum (Prairie Dock) and Silphium laciniatum (Compass Plant). Another nice feature of this plant is that it rarely flops over in the flower garden, if the location isn't on a steep slope.

A wildflower blogger in Arkansas is even more enthusiastic about rosinweed:

Silphium is a standout plant for many reasons. It blooms in sun and shade. There are many flowers on each plant. It’s one of the few plants that blooms all summer and into fall. As a bonus, the large sunflower-like flowers attract butterflies, hummingbirds, yellow finches, bees and all kinds of interesting insects. If that is not enough, Silphium integrifolium is drought tolerant.

In July, some rosinweed plants were blooming near bright pink blazing stars at one of the Whiterock Conservancy prairies: