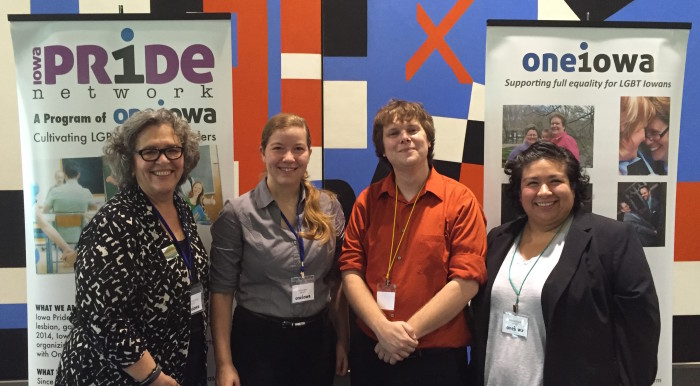 Rush Limbaugh is all a-twitter about what he describes as an invasion of lesbian farmers. His conspiracy theory includes imagined government payments designed to recruit lesbians to leave urban America and flood ‘red’ states to farm.

You can’t make this stuff up.

Of all of the events in the LGBT Rural Summit Series since it began in June 2014, it was our 2016 event in Iowa, the 15th in the series, that really ticked him off. Why Iowa? Why our event?

This began for us at One Iowa, the state’s largest LGBTQ advocacy organization, a year ago when I attended the Midwest LGBT Summit in St. Louis sponsored by the White House, the U.S. Department of Health & Human Services, PROMO (Missouri’s statewide LGBT advocacy group), and the Missouri Foundation for Health. The event brought local advocates and community members together with national players to explore issues impacting LGBT health, aging, youth, and the transgender community in the Midwest. It was there that I connected with U.S. Department of Agriculture (USDA) staff and learned more about the Rural Summit Series.

I knew we had to host a summit in Iowa. Our issues, as LGBT people in a largely rural state, often play out differently than in urban coastal communities. Those differences are important. We began to have conversations about what this could look like in our state.

It took almost a year of planning, scheduling, and conference calls. The USDA’s Office of the Assistant Secretary of Civil Rights, the National Center for Lesbian Rights, and The True Colors Fund worked with One Iowa and the Agricultural Law Center at Drake University to organize the summit. A lot of smart people who didn’t know each other came together with lots of ideas and pulled together the conference that finally got under Limbaugh’s skin.

At the summit, Des Moines Mayor Frank Cownie welcomed participants to our fair city. An open floor discussion about “Being LGBT or an Ally” in your community and a roundtable conversation about poverty and health disparities followed.

Our LGBT-specific workshops covered youth, elders, families, and laws for farmers. We fed more than a hundred people. We learned about the extraordinary work of the USDA. And, I believe, we helped our friends from Washington, DC; San Francisco; and New York understand a little more about our challenges and opportunities here in the heartland. It was a great opportunity to exchange resources and ideas and build relationships. Everyone went home with a lot of new knowledge and a “Heartland Pride” pin showcasing a rainbow ear of Iowa corn.

We were honored to welcome U.S. Secretary of Agriculture Tom Vilsack as our keynote speaker. He spoke to the new realities of the USDA: “We are a much more functioning, better department because we represent the entirety of America.”

When he said that, he included us.

Why are Rush Limbaugh, Elizabeth Harrington, and other right-wing pundits so terrified of lesbian farmers? We already exist. We live and work and raise our families in 99% of America’s counties. We are lesbians on tractors, transgender people raising cattle, bisexual beekeepers, and gay soybean farmers all across America. We have been here for a very long time, often hidden in plain sight.

What terrifies those on the far right, I think, is that we are becoming more and more visible. We are claiming our right to be who we are, where we are. That includes our rural communities, the places many of us were born and raised.

We applaud the USDA’s dedication to serving LGBT rural America. We thank our friends at the True Colors Fund and the National Center for Lesbian Rights. We are so grateful to Matt Russell and the folks at the Agricultural Law Center at Drake University. And we continue to celebrate the courageous and beautiful LGBT people who are so integral to our rural communities.