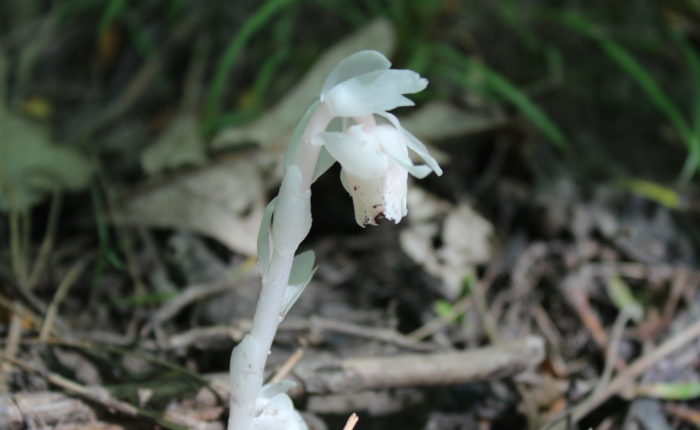 Venturing into the woods in late summer is not common for me, as the prairie whispers my name. A quick walk in the woods might just be a good change of pace. Hiking boots on and a camera over my shoulder, off to the woods I go. Within a few short feet of a walking trail, my eyes immediately zoomed to the ground...a snow white flower? mushroom? fungus? Kneeling to take a closer look, the flower appeared to be a fungus. My eyes gaze around the forest floor to see a few more tiny, white looking, flowers and some have tinges of color. Flower or fungus? Being easily entertained, I photographed in every way shape and form in hopes that some would help me to define this unique “something”.

What appeared to be a strange looking fungus, had all of the aspects of a true flower. Not green, but white; a clammy feeling to the touch and waxy petal looking leaves that alternate up the stem. Some were in clumps and some were singled out. Some bowed and some stood straight up. Some had a pink tinge of color and some had a dark purple to black tinge around the petal looking leaves. Some had little yellow-looking flowers within the top of the plant. After an hour of photographing and digging out the old reliables of resource books, all of these observations pointed in the direction of the Ghost Plant, also known as Indian pipe and fairy smoke. Mystery solved!...almost.

How can it be a true flower if it lacks chlorophyll? Chlorophyll is necessary for photosynthesis, where most plants are able to manufacture their own food from nutrients in the soil, carbon dioxide and with the presence of sunlight. Without chlorophyll, the Indian pipe (Monotropa Uniflora) does not produce its own food, so there is no need for leaves along the stem. Instead of leaves, there are small scales, alternating up the stem. Since it does not need the presence of sunlight, it can grow in the darkest areas of a woodland. So how does it receive its food?

Indian pipe has roots, is not parasitic to trees but there does seem to be a mutually beneficial relationship with a fungus within the soil where it grows, called a mycorrhizal fungus. This fungus forms a connection with the Indian pipe and the nearby trees seem to transfer some of its food through its roots to the Indian pipe. Seems as though there is some disagreement amongst botanists on whether the roots of Indian pipe obtain nutrients directly or indirectly through fungi.

The flower of Indian pipe is borne at the top of the stem, first drooping to form the shape of a “pipe”. Once pollinated, the flower turns upright and the plant seems to turn a blackish brown color. The fruit is almost the shape of an urn or vase and appears to look like a seed capsule with five cells. Each cell contains many seeds and, once again, must rely on the fungus to obtain the necessary nutrients it needs to grow. The pollinators of Indian pipe seem to be bees and small skipper butterflies, but not all the questions of this unusual herbaceous plant have been answered. In looking at each individual plant, all characteristics are obvious, but looking more closely, you may find many of last year’s remnants within the new grouping of clustered pipes.

The genus species of Indian pipe is Monotropa uniflora. Monotropa is Greek meaning "one turn" and uniflora is Latin for "one flower."

Although the flowers are nodding when they first appear from the ground, eventually standing in a vertical position as the fruit forms. Any small disturbance to the plant seems to make it darken in color, giving it a rotting appearance. Some refer to this as the "Corpse plant".

Once the flower has been pollinated, the fruit appears vase-like, has five cells, and each cell contains numerous seeds.

It is not uncommon to see last year's dried stems within the new growth of pipes.