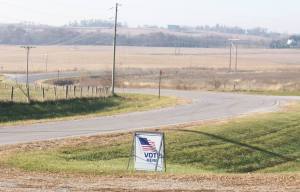 Next For Iowa Democrats

Thanks to Democratic activist Paul Deaton, “a low wage worker, husband, father and gardener trying to sustain a life in a turbulent world,” for cross-posting these ideas from his blog. -promoted by desmoinesdem

The Iowa Democratic Party should be blown up and its structure re-engineered — from scratch.

There has been a lot of internet discussion about what’s next for the Iowa Democratic Party after three terrible election cycles. That is, terrible in terms of winning elections.

Here are my thoughts, most of which have been expressed previously.

Part of me says the Iowa Democrat Party has become irrelevant to most Iowans of voting age. According to the Iowa Secretary of State, 1,367,072 active voters (68 percent) were not registered as Democrats on Nov. 1.

Part of me says the Iowa Democratic Party is needed as a voice to counter Republican dominance in the legislature and governor’s office.

Part of me says I am getting too old to be investing much time in Democratic politics. I should let go and let the next generation take charge. I’m working on that.

The current generation doesn’t get to pick the next party leaders, nor do men and women in their twenties and thirties need a lecture from bloggers about what should or shouldn’t be next. They, and in turn we, will be fine.

I believe the strength of the Democratic party is it remains a big tent with people of all ages participating to some degree, if only by voting. We need to be less like a caravansary wandering in the desert and more like occupiers of the society Republicans have made on our historic turf. In that regard, age and experience in Democratic politics matters very little. What matters more is forgetting the anthropomorphism of “Democratic Party” and understanding our quadrennial coalition building relies less on political parties and more on the places we go every day: church, schools, work, daycare, the grocery store and in our neighboring yards, gardens and apartments.

What does that mean to the Iowa Democratic Party?

1) The time has come to compensate the party chair. Not a stipend. Not expense reimbursement. A salary with benefits.

2) Communications is the most important thing the party does and we need improvement. I subscribe to the news summary, read the press releases and listen to statements by the chair. While they have their high and low points, we are chasing the news rather than leading it. We need news people can use in places we go every day to talk about why we identify with the party. Party communications staff must spend some time figuring out what that means and making information easily available to party members.

3) Iowa Democrats have a paucity of large donors. There just aren’t that many in the state. The chair plays a role in party fundraising, but the effort would be better served by delegating it to prominent Democrats on a volunteer basis. The idea some have proposed of requiring the chair to spend a percent of time fund raising belies the chair’s more important role in party building.

4) The world won’t end if we ditch the caucuses. I see no reason to continue to collaborate with the Republicans in their party building. They are much better at using the caucuses toward this end, so why cede an advantage? I’d move the presidential preference vote to the June primary election and walk away from the notion that Iowa Democrats have any true influence. David Redlawsk disagrees with me, but I don’t spend any time in academia and almost all of my time in public with Trump voters drawn in as a result of Republican organizing during the caucus cycle. The Iowa caucus disadvantaged Democrats in 2016 and if it continues, it will get worse.

5) Data analysis is important to modern elections and some permanent staff is required to maintain it. Probably two or three people to make sure there is cross training if one gets recruited outside the party. What matters less is using voter history as the primary driver in targeted canvassing. In fact there is a case to be made targeted canvassing should be relegated to the dustbin of history. It is neighbors and friends who voted Republican this cycle. We need to get to know them better throughout the state and recruit them to vote for our candidates. The party can assist in this effort, but the importance of decentralizing the canvass and get out the vote effort cannot be overstated.

6) The party needs a bookkeeper and my preference would be to find a talented, bonded firm to perform that work on a contract basis.

So that’s it — four or five permanent staff, and the rest contracted out or drawn from volunteers willing to work on Democratic politics year-around.

While I appreciate the internet discussion hosted by bloggers in the state, most voters I know don’t read many blogs. To be successful in 2018 and beyond, our focus as Democrats must be on making sure we know what we stand for and then working within our community to create a climate of listening to divergent views, followed by accommodation where it is possible and persuasion that Democrats have something to offer.