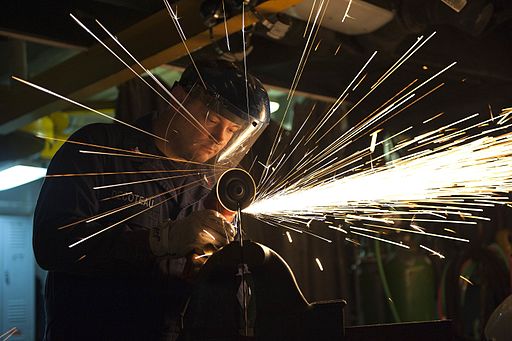 Thanks to Democratic activist Paul Deaton, “a low wage worker, husband, father and gardener trying to sustain a life in a turbulent world,” for cross-posting this opinion column that first appeared in the Cedar Rapids Gazette. -promoted by desmoinesdem

Since the general election I’ve been laying low, listening to people talk — in person — about the new administration and what President Donald J. Trump means to them.

It was about jobs.

Most supporters found a lot of what the president said and stands for to be objectionable, yet voted for him because of the hope for jobs — a central campaign theme. Manufacturing jobs specifically.

In his inaugural address, Trump gave a name to something with which many are familiar, “the American carnage” of globalization and its impact on U.S. manufacturing jobs.

An issue page of the White House web site the administration laid out his position:

Since the recession of 2008, American workers and businesses have suffered through the slowest economic recovery since World War II. The U.S. lost nearly 300,000 manufacturing jobs during this period, while the share of Americans in the work force plummeted to lows not seen since the 1970s, the national debt doubled, and middle class got smaller. To get the economy back on track, President Trump has outlined a bold plan to create 25 million new American jobs in the next decade and return to 4 percent annual economic growth.

As a deal-maker, the president asserts he knows how to do it. His plan is not yet public so it’s difficult to evaluate.

I’ve worked manufacturing jobs during my life and as a director of a logistics company that evaluated countless others. While living in Indiana I interviewed thousands of people impacted by the exodus of jobs in the rust belt as part of a global restructuring of workforce and business operations. In this sense Trump is right about the carnage: real people were negatively impacted by loss of U.S. jobs. I met many of them.

At the same time, finding cheap labor and developing new technologies enabled companies to be competitive in a global marketplace. However, Trump’s “carnage” launched with intensity because of Ronald Reagan’s policies, not Obama’s. I believe Trump’s assertion about jobs is a bait and switch.

On Friday, Jan. 27, the White House announced a “Manufacturing Jobs Initiative.” Andrew Liveris of Dow Chemical Company is convening a panel of business leaders to advise the president. For the most part, it is a who’s who of companies that benefited from globalization. I am doubtful this group can do much besides inform the president what regulations and tax codes need revision to encourage large companies to locate manufacturing plants on U.S. soil. The two token AFL-CIO members represent labor interests on the panel, but even they are part of a gigantic dog and pony show expected to accomplish little in terms of direct results impacting real people.

The metrics to evaluate Trump’s job creation performance already exist in the Labor Department jobs report which shows the millions of jobs created during the Obama administration. Assume the methodology remains constant, fill out the chart as time passes and new results are in, and there is an objective basis on which to evaluate performance. A similar metric holds true for economic growth. We should have a solid couple years in before the 2020 campaign begins. Thumbs up or thumbs down. It should be that simple.

Like it or not, with Wall Street alumni occupying four key positions in the administration, whatever jobs are created are likely to be similar to those created under Obama.

I am not hopeful for resurgence in manufacturing jobs, nor was this my issue during the 2016 campaign. However, Trump’s assertions about job creation came from the lips of every Trump voter with whom I spoke, no exceptions.

If Democrats hope to win the next presidential election we need to understand why friends, neighbors and work colleagues voted for Trump. In part, it was about jobs that won’t be back the way we knew them, regardless of campaign promises.