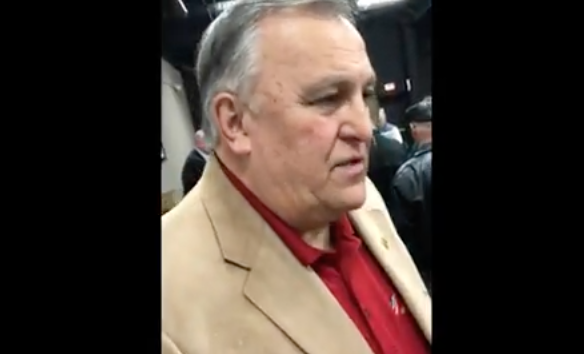 Iowa House Republican: "Anything you say to a gay anymore is a gay slur"

After inadvertently saying something offensive, a decent human being might apologize.

Watts made news at a legislative forum in Adel in early February when he repeatedly referred to his 2016 Democratic challenger Bryce Smith as "red rider," a derogatory term for a gay man. You can watch the video (beginning around the 1:09:30 mark) or read my transcript of Watts taunting Smith's husband, Kale Smith. Watts later claimed he didn't realize the term could be considered a slur, adding that he meant to mock his former opponent by comparing him to a Red Ryder BB gun.

On March 25, Watts attended an Urbandale Chamber of Commerce event, where Karin Derry asked him whether he knew the term "red rider" was a slur when he used it to describe his former opponent. All he needed to say was, "I had no idea. I regret saying it and I won't do it again."

Here's the exchange, which "Jefferson1 IndivisibleIowa" uploaded to YouTube:

News flash for Representative Watts: you don't get to decide what might be offensive to members of a group that has long faced discrimination and homophobia. You're not the victim here. In any event, none of this would have blown up in your face if you didn't feel compelled to keep belittling your former opponent.

This is an unacceptably dismissive and unapologetic response to a valid question about his previous use of a slur. Words have real power to hurt and suppress marginalized communities, and Rep. Watts is failing to take responsibility for his words and shifting blame to the very community his words are hurting. Further, his use of the phrase "a gay" is homophobic and dehumanizing. We ask him to apologize for his actions.

Don't hold your breath. We're talking about a guy who thought it was funny when a man at the Adel legislative forum told a pro-choice woman, "your mother should have taught you how to keep your legs closed."

Watts also tuned out during the Iowa House floor debate on a bill to strip some 180,000 public workers of their collective bargaining rights. Respect for others is not his strong suit.