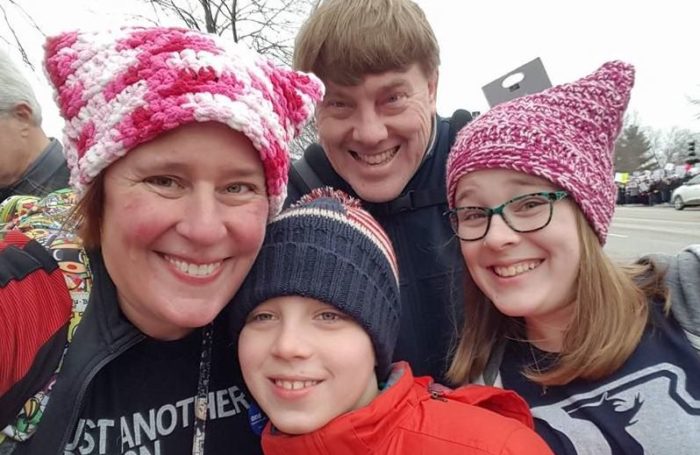 How a "pre-existing condition" almost wrecked my perfectly healthy family

The author is a longtime personal friend. I can confirm this post accurately conveys what happened to her family. -promoted by desmoinesdem

I never worried about pre-existing conditions before the fall of 2008. We were young, healthy, and gainfully employed with employer-provided health insurance. What was there to worry about? It's a little painful to admit how self-centered and over-confident I was, but there it is. Just keep a job with insurance or be sure to make COBRA payments and there was no problem. At the time, my husband was an engineer in working as a VP in manufacturing, and I owned two stores. Oh to be young, financially secure, and over-confident!

Then one day in September, I stopped to fill a prescription for my daughter's eye drops and the pharmacist told me my insurance had been cancelled.

"What are you talking about? I just came from the doctor's office."

"Actually, Ms. Keith, we show you haven't had insurance since March."

Then it hit me. Sitting in the Walgreens drive-thru. My husband's employer had been struggling financially, but I didn't think it was possible for them to cancel our health insurance without our knowledge, let alone to do it retroactively. My mind raced. I had a daughter about to turn six and a one-year-old son. How many times had we been to the doctor since March? We'd been to the ER once, but there were so many little things here and there. I drove home as my retroactive medical debt piled up in my head.

In those desperate moments, I calmed myself thinking....we will be fine. We have money (we didn't...the next day his employer bounced his previous paycheck and announced they couldn't pay the next one on Friday either), I could make a company plan through my business (I couldn't, I didn't have enough employees willing to participate), but most of all....we were all healthy. What I didn't understand is that being healthy isn't enough. You have to have healthy records too. In fact, you have to have an immaculate health history.

That one trip to the Emergency Room. My son spiked a 106.1 fever just before his first birthday. Now I know that he's just a hot kid. I don't even worry until he's over 102.5. But 106.1 in a one year old is pretty serious business. We took him in, he got a nebulizer treatment, IV antibiotics, and was sent home with instructions to keep up the breathing treatments and see his doctor in the morning. One more round of IV drugs and he was fine. No permanent damage. No chronic issues. He was never even admitted to the hospital.

But now we had a weakness that could be exploited. When I submitted to purchase a plan through Wellmark Blue Cross/Blue Shield, I was informed that my son would have a pre-existing condition rider for FOUR YEARS for all respiratory aliments. Quadruple his lifetime, almost. Well, this is obviously a mistake. I had our pediatrician write a letter clarifying that he had no chronic condition and appealed. Our appeal was denied.

Pre-existing conditions were about insurance companies trying to wiggle out of covering EVEN HEALTHY PEOPLE. You think you're safe because you don't have cancer? Because you have employer provided insurance? Because you have money and can buy your way out of any problems? Yeah, I used to think that too. But I was wrong.

In the end, we were "lucky" for those bounced paychecks, because it meant that by the time we were denied, my kids qualified for HAWK-I (Iowa's version of the State Children's Health Insurance Program) and were able to get coverage through the State of Iowa.

But my husband had co-workers whose lives were ruined. People who did have cancer. People who couldn't buy their way out. Hard-working people who didn't choose unemployment, they just had the rug pulled out from under them.

We can have all sorts of conversations about how to improve the Affordable Care Act, but it is absolutely the wrong thing to reverse the pre-existing condition protections. It is wrong for Iowans and it is wrong for the United States.