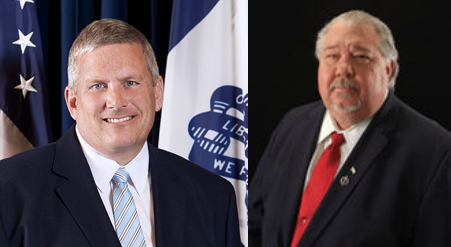 Two weeks after Iowa Secretary of Agriculture Bill Northey publicly expressed interest in a job with the U.S. Department of Agriculture, he appears to have an offer on the table. Farm Journal Radio reported on May 12 that Northey will become undersecretary for farm production and conservation, a position that "includes overseeing the Farm Service Agency, Risk Management Agency and the Natural Resources Conservation Service." The source was Jim Wiesemeyer, senior vice president of policy and trade issues for Informa Economics Inc. WHO-TV's Dave Price said his sources confirm Northey is the pick for that job. UPDATE: Agri-Pulse was first to report this news Friday morning.

Depending on when Northey resigns, either Governor Terry Branstad or soon-to-be-Governor Kim Reynolds will appoint someone to serve as secretary of agriculture until after the 2018 election. State Representative Pat Grassley has long been rumored to be interested in Northey's job. That statewide position would be a nice stepping stone to a campaign for his grandfather Chuck Grassley's U.S. Senate seat in 2022.

If appointed to replace Northey, the younger Grassley would likely clear the field in the GOP primary for secretary of agriculture. A special election would be required in Iowa House district 50, a safe Republican seat covering Grundy County and parts of Hardin and Butler counties. House GOP leaders would select a new Appropriations Committee chair before the 2018 legislative session.

Also on May 12, Jessica Huseman reported for ProPublica that Sam Clovis, who has been overseeing the transition at USDA, will become head of the agency's research section. (In his interview with Farm Journal, Wiesemeyer said Clovis was "close to being finalized" as undersecretary for research, education, and economics.) Huseman's story noted,

Clovis has never taken a graduate course in science and is openly skeptical of climate change. While he has a doctorate in public administration and was a tenured professor of business and public policy at Morningside College for 10 years, he has published almost no academic work. [...]

Clovis advised [Donald] Trump on agricultural issues during his presidential campaign and is currently the senior White House advisor within the USDA, a position described by the Washington Post as “Trump’s eyes and ears” at the agency.

Clovis was also responsible for recruiting Carter Page, whose ties to Russia have become the subject of intense speculation and scrutiny, as a Trump foreign policy advisor. [...]

Catherine Woteki, who served as undersecretary for research, education and economics in the Obama Administration, compared the move to appointing someone without a medical background to lead the National Institutes of Health. The USDA post includes overseeing scientific integrity within the agency.

When Clovis quit as Rick Perry's state chair to ride the Trump train in the summer of 2015, I never dreamed that what looked like a hypocritical and mercenary decision would pay off so spectacularly.

UPDATE: Northey posted this Facebook status update on May 13.

I appreciate the kind comments and support from so many friends here in Iowa and across the country as news has circulated recently about a possible role for me at USDA. The appointment process can take time to unfold and it is important not to be overly presumptive. I hope you will all understand that I cannot confirm anything or make any formal comment about the rumored appointment at USDA. I look forward to communicating about that more openly at the appropriate time. As I have said many times, I love my job as Iowa Secretary of Agriculture and I am anxious to support the President, Sec. Perdue and USDA’s mission in whatever role I am in – either within USDA or outside.

SECOND UPDATE: Speaking to reporters on May 15, Northey implied nothing had been finalized about a USDA position. O.Kay Henderson reported for Radio Iowa,

“Whichever way, I’m around for quite a while,” Northey said today, “whether that’s another year and a half or several months.”

Northey, though, has had “several conversations” with newly-confirmed U.S. Ag Secretary Sonny Perdue, including a face-to-face when Perdue was in Iowa last week.

“I know he’s had that with lots and lots of folks as he’s trying to put his puzzle pieces together of where all the strengths are and who he needs in different positions,” Northey said. “You know he just announced the reorganization of U.S.D.A., so some of these positions are even new to what they’ve had and the way that they’re formed.” [...]

Northey suggested that by learning about the inner workings of the U.S.D.A, he could return to Iowa and advise ag groups about how best to influence federal policymakers.

Radio Iowa also published a story by Dennis Morrice of KLEM radio in Le Mars about Rachel Pick, a Le Mars native Perdue hired to be his executive assistant.

Rachel Pick started working in Washington, D.C. as part of Senator Chuck Grassley’s staff before becoming an employee of the U.S. Senate in the Sergeant-At-Arms office. She says meeting Perdue was happenstance. [...]

“His office is currently just down the hall from me, so they commonly refer to us as the ‘Midwest Maffia,” Pick says. “I think we were both kind of surprised to realize that we grew up just about 25 miles away from each other. So, when we talk about home it brings up lots of good memories, and its nice to have someone in the office that knows almost to the county intersection of where you are talking about.” Pick says Secretary Perdue often talks to her about her opinions on ag issue.

She says she keeps an aerial picture of her family farm on her desk and whenever Perdue meets with cabinet members or others, he points out. “And I think that’s really cool that he does appreciate the fact that I did grow up on farm and that my dad still farms,” Pick says.

THIRD UPDATE: Masterful misdirection by Reynolds at her May 15 press conference with Branstad, telling reporters "says she’s confident she’ll be able to name a new ag sec if @BNorthey gets named to a USDA post." No one has ever disputed her power to name a new secretary of agriculture under those conditions, because if Northey takes a federal government job, he will vacate his state position. A key point of Attorney General Tom Miller's well-researched opinion was that the lieutenant governor position will not be vacant after Branstad resigns. Iowa's constitution contains many references to the lieutenant governor acting as governor or "performing the duties pertaining to the oﬃce of governor."