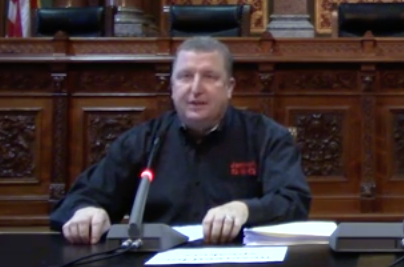 Jethro's: "We support our employees and a minimum wage hike." Then why did Mike Holms lobby for House File 295?

I came across a Des Moines Register article in my Facebook feed that was 856 words long. It was a rebuttal to a letter to the editor about Jethro’s BBQ planning to open a restaurant in Ames.

The rebuttal is authored by Bruce Gerleman, Iowa view contributor and owner of all the Jethro’s BBQ.

I took offense at this response, and I’ll tell you why. And I hope that since I am just a low wage worker, if my response is 856 words long, the Register will publish my view as well.

I gave comments on the Iowa bill that passed LOWERING the minimum wage in some counties this session. I was against it, and if you want to see my comments as well as Mike Holms’s comments on behalf of Jethro’s, you can on this video.

Mike Holms started speaking around the 17:50 second mark. And yes, he was for lowering the minimum wage.

I would suggest you watch the whole video if you want to see who is standing up for impoverished Iowans and who is looking to exploit them. (My comments begin around the 51:50 mark.)

Holms discussed why he wants to lower the minimum wage for Iowans. His argument is that it would be impossible to grow and it would be the wild west. It would be so inconvenient that we have to have a state minimum wage because the bookkeeping is too hard.

I worked in restaurants like Jethro’s for thirty five years. I went into work at 6 am every Monday to do inventory. It would take us two hours to count fifteen thousand dollars worth of inventory, enter it into a program, and find out where our food cost was.

I can’t imagine working for Jethro’s and when the General Manager came in at 8 am on Monday, telling them “it was just too complicated to figure out the food cost.” I would be fired by 8:05.

When this bill was being debated, this is what it always came down to. It was too hard to keep these wages straight.

If Jethro’s pays so well, what is the problem? Why would you send a spokesman to lobby for LOWERING the minimum wage? Ask your kitchen manager what’s harder: coordinating five or six hundred plates on a busy night, inventory and food cost, or keeping track of pay rates.

And the National Restaurant Association Lobby registered in SUPPORT of the lower-the-minimum-wage law, House File 295.

Here’s what Bruce Gerleman said about them in his article.

The Iowa Restaurant Association represents the 6,000-plus restaurants in our state. The association spoke in favor of raising the minimum wage, but they favored keeping the “tipped wage” as is.

The National Restaurant Association is of course now claiming they are for raising the minimum wage. It will be 2019 before that issue has a chance of being addressed. How convenient.

I sat in the Iowa Senate committee meeting on the lower-the-minimum-wage bill that passed this session. When lobbyists gave their verbal comments, the National Restaurant Association position was once again, “the patchwork of minimum wages by counties is just too difficult to implement.”

My position that I got to share was, “With all due respect to the National Restaurant Association, until you work one job 30 hours a week and then cross the street to go to your second 30 hour a week job just to keep your family afloat, you have no idea what inconvenience is.”

I will never forget the smile I got from that lobbyist. It really seemed surprised but cruel.

If Bruce Gerleman wants to throw Mike Holms under the bus, that’s great. But it should have been done a long time ago. His views on keeping the minimum wage low are not new.

And if you’re going to defend the National Restaurant Association, you are still on the cruel side of this argument.

You sure didn’t lobby against the lower-the-minimum-wage bill.

I also wonder about the insurance you provide to workers. As high as premiums are, what percentage of workers take you up on the 50 percent premium cost? I ask because the majority of restaurant workers I have known use Title XIX or Medicaid as premiums are way too expensive. So how many of them take you up on your offer would be my question. Poor folks’ insurance has been a hidden subsidy for businesses for way too long.

Oh yeah, the $300,000 contribution to local charities. Was that written off your taxes? On top of your corporate tax credits and credits from your previous year’s federal taxes? Do you contribute to state coffers or write it off?

I bring this up because Governor Terry Branstad paid $2,629 in net state taxes in 2015. He received a refund of over $7,000 from Iowa coffers. We paid in and he withdrew.

So the next time you want to use the excuse, “it’s to difficult to keep these wages straight,” ask for some help from your kitchen. Compared to what they do every day, the difference in county wages would be a walk in the park.