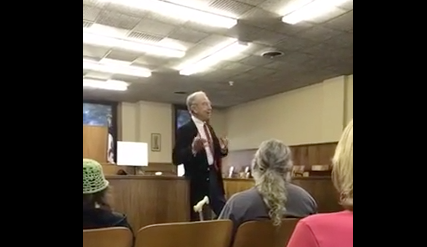 Marginalized Iowans and the lack of representation in Washington

Matt Chapman reflects on Senator Chuck Grassley’s town hall in Greenfield on June 2. A video of that event is at the end of this post. -promoted by desmoinesdem

I have had a chance to ask Representative David Young, Senator Joni Ernst, and Senator Chuck Grassley about the American Health Care Act and the cuts to Medicaid that would occur if it passed. Out of the three, none would even come close to addressing it.

At a meeting with David Young in Des Moines with Indivisible activists, I asked about the AHCA and if he thought it was acceptable to cut $880 billion from Medicaid and give it to the top 1 percent. After dodging a few times, he finally said, “it will be ten years or so before anyone will lose their insurance.”

He was corrected that it would be in effect in a few years and anyone who had a gap in coverage would not be allowed to re-apply. How it was OK in the future to deny health care is beyond me. Many other issues like pre existing conditions were brought to his attention and how the AHCA would remove the protections put in place.

I kept going back to if he thought it was acceptable to give the Medicaid expansion coverage funding away. The fifth time I asked, he responded, “I don’t want to pull the rug out from under anyone.” His vote proposed doing just that.

We applauded him for saying no on the first attempt to pass the health care bill. On the second pass, he said he was still opposed. Before the third pass through the House, he apparently had his arm twisted and signed on to an amendment offered by Representative Fred Upton, who had flipped after a White House meeting with President Donald Trump.

During his pop-up town hall in February, Young claimed, “He’s not my boss,” referring to the president.

Young’s amendment did nothing except put $8 billion in over ten years to subsidize the fact that contrary to provisions in the Affordable Care Act, insurance companies would once again be allowed to charge higher rates to people with pre-existing conditions. The $880 billion giveaway to the 1 percent through the Medicaid cuts are still intact in the bill that was sent to the Senate. And the states need the flexibility to fund as they see fit. That seems to be the buzzword/talking point as I have heard it over and over in regards to the AHCA. Let them decide with block grants where to spend the money we’re not giving them for Medicaid.

This is not news, I know. But the way all of Iowa’s federal representatives, with the exception of Representative Dave Loebsack, seem to not care about average Iowans is really stunning and bears being repeated.

After Senator Ernst’s forum at Drake University, I waited around outside talking to some folks. When she came out, I asked her about the AHCA Medicaid cuts just like I had with David Young. Rather than address what I was asking, her response was, “We have to think of those just over the poverty threshold and rising premiums.”

It was a little chilly and the wind had picked up, and she was obviously cold (and tired I’m sure after the crowd at Drake had been grilling her), and she was whisked away after spending a few minutes talking to us.

After she left, I realized that she had driven a wedge between two marginalized groups instead of answering my question. This tactic seems pretty common when I talk to lawmakers who want to dodge questions.

Medicaid envy is a term I’ve heard as well. People just over the level to be eligible for Medicaid get jarred by a huge premium. I have a friend with a wife and three kids. The children are eligible but it is $800 a month just for him and his wife. To point that out and use it for political gain by pitting these people against each other is just sick.

In Greenfield last week (see video enclosed below), I listened to folks asking Senator Grassley about pre-existing conditions, cuts to Medicaid and rising premiums. His response for all three was, “I will have to see the bill.” They asked him repeatedly in general what he thought of those proposals. His response was not to give one.

He was also asked about the Iowa insurance situation, where 70,000 could lose the ability to buy individual coverage. He spoke some about a waiver for Wellmark Blue Cross and Blue Shield and who he had been talking to. He seemed to blame the Iowa legislature and said they need a special session to address this waiver before August. He then told us that he had no sway over the local government and told us, “The last time I said anything to them, the leader told me to worry about Washington.” [Note from desmoinesdem: Iowa Insurance Commissioner Doug Ommen has repeatedly said it’s up to Congress–not state officials–to address the problems that caused insurance companies to pull out of Iowa’s individual market.]

I had never met Grassley before and was struck by how elderly and frail he looked. Even his suit and tie looked a little threadbare, and meeting in the Greenfield Courthouse just emphasized the appearance of his age to me. Now he always looks sharp on video, so maybe this is his “full Grassley 99 counties” suit.

At one point he pointed to Republican State Representative Clel Baudler (who didn’t even have his hand up) and asked what his question was. The representative stood up and praised him for blocking the Supreme Court nominee and said “You won that one for us. I don’t have a question, I just wanted to say that.”

The tribal aspect of this comment struck me as disturbing. The goal seems to be as much about hurting those who don’t agree with your political leanings as it does with pushing the conservative agenda forward. The majority of those gathered here were not happy with Grassley’s obstruction, and Baudler’s off the cuff remark is a good indicator of where some on the right are coming from. It’s not enough to win. There seems to be a need in some, not all conservatives to stick a finger in the eye of every liberal they interact with.

Another example of this occurred at last month’s Medicare for All rally outside the Federal Building in Des Moines. Here we were listening to activists and candidates speak about universal healthcare for all citizens. Some folks decided to protest the rally. They took the time to load up their red, white and blue tractor and did u-turns on Walnut Street chanting “USA! USA!”

The irony is that the Medicare for All policy is for all citizens, not just those in our tribe. I wondered if the folks who were protesting our rally had really ever had an issue with accessing health care. To my eye, these folks seem like nihilists. They wrap themselves in the flag but seem to only understand our country like a child sees his mother. And they are truly jealous of anyone else getting her attention.

At Senator Grassley’s forum, I quietly sat in the front. While people applauded the pushback on the repeal of the Affordable Care Act and other progressive issues, I didn’t. When it got close to the end I raised my hand, and the senator said I would be the last question.

As I knew my question had already been asked and left unanswered, as it has been all year. I tried a different tack and asked, “Do you think that it is acceptable that the greatest and richest country in the world has citizens who have no healthcare?” (see the video below, beginning around the 59:50 mark)

The senator didn’t really answer the question, but this was part of his reply:

I pressed once again, asking if he thought it was acceptable that we don’t provide adequate healthcare to all citizens.

From his response: “I believe our job is to provide more ability for people that want insurance to get insurance. Now thank all of you and I will meet with the press in the next room.”

After that a scrum circled him and before he left he leaned down (as I was sitting) and mentioned Medicaid. I then told him that I had dental insurance for the first my life at age 51. (I got a letter just today from my dentist telling me that they were dropping Delta Dental, the Medicaid dental provider in Iowa.) I also mentioned the almost trillion-dollar giveaway to the 1 percent and he turned and walked away.

I spent a lot of time learning about the Medicaid expansion and what these three lawmakers thought of Iowans who have no other recourse for care. While all three come across as thoughtful people, the reality is in their votes. David Young has already shown that he has no concern for them.

Maybe they don’t relish the suffering of marginalized Iowans, like Clel Baudler and the folks trolling us on their tractor were doing. Baudler has voted to cause suffering and I’ve watched and heard him troll without shame. He is at least honest in that regard. Much like Representatives Rod Blum and Steve King, maybe he feels secure in his seat and doesn’t have to hide who he is.

I just want to add this. We can fix this. I was feeling rather demoralized and defeated when I left the forum in Greenfield. The election in November and the bills that passed last session at the Capitol left me in haze as well. But I still have faith in people. I crashed the west-side Democrats meeting on June 5, and they had a great turnout. I think we give each other a charge when we put our minds and backs into making our state a great place for all Iowans. Even nihilists on a red, white and blue tractor.