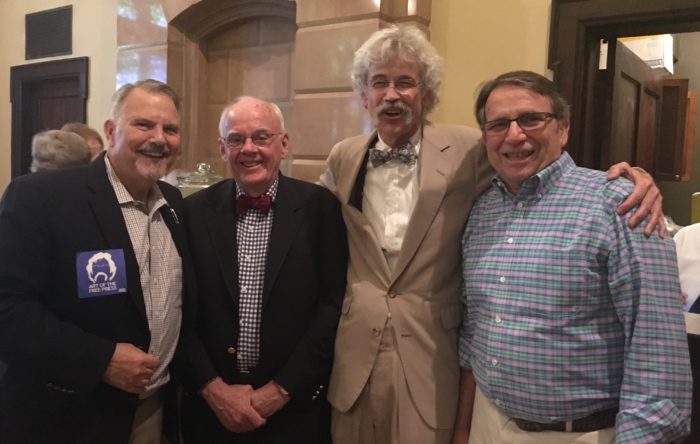 Part toast, part roast, the standing-room-only soiree for Pulitzer Prize-winner Art Cullen was a memorable event. Orchestrated and emceed by Iowa Freedom of Information Council executive director Randy Evans, the event also served as a fundraiser and friend-raiser for the IFOIC and was attended by past and present journalists, politicos and other well-wishers.

Fellow Pulitzer Prize-winner Michael Gartner “interviewed” Art, both wearing bow ties, which Art acknowledged his spousal unit Dolores had made especially for the occasion. He also admitted that she had cut his Mark Twainesque unruly hair in anticipation of earning the Pulitzer. He was in the Storm Lake Times office, watching the Columbia University announcement of the Pulitzer Prize winners on YouTube. When his name was announced, he jumped out of his seat and shouted “Holy shit!,” (a journalist term of endearment), and screamed, “We won!” to which his brother John, sitting nearby, nonchalantly asked, “What did we win?” Art said it’s the first time the brothers hugged each other.

As we all now know, it was the Pulitzer Prize for editorial writing that Art had won. Actually I should use the word “earned,” much like there are no Medal of Honor “winners,” there are only recipients. Art earned the Pulitzer. But it wasn’t just Art. It was a family affair.

I love and respect Dave Witke, former sports editor and operations director at The Des Moines Register. Dave was one of Art’s admirers at the event. Dave hired me and told me one the marks of a good newspaper is if you stop on every page, if both the news and advertisements capture your eye. I don’t know most of the people whose lives are chronicled in The Times, but I am taken by every page.

Dave also told me early in my journalistic career is that an excellent community newspaper has lively and reader-driven editorial pages, with locally written columns and editorials, and abundant letters to the editor. The community should feel a sense of ownership in the newspaper, Dave said. Of course Dave is right, because The Storm Lake Times displays these hallmarks of a great newspaper.

Art acknowledged that his son Tom did all the follow-the-money investigative work and reporting as he sat on his ass in the office. Looking at the Times masthead, one sees that its twice-a-week birth has many mothers and midwives, including brother John, the publisher, John’s wife Mary, and Art’s wife Dolores, in addition to Tenacious Tom. Art and Dolores’ daughter Clare also worked at the family business for a couple of years, but has moved on to the Cedar Rapids Gazette as a copy editor.

Art recounted the long, often lonely, road to the Pulitzer wasn’t an easy one. Tom was met by extreme stonewalling during his investigative search, which much like the work of Carl Bernstein and Bob Woodward, followed the classical journalism admonishment “follow the money.” Gutsy Tom even ambushed two recalcitrant sources on an Okoboji golf course. It was with the help of the Iowa FOI folks that some obstreperous sandbaggers started to leak.

Speaking of leaking, Michael Gartner told the audience why he wears his trademark bow ties. It came, he said, as a result of “changing the diapers on boy babies.” He added, “I’ve never seen a pediatrician wear a long tie.”

Besides their bow ties and love of words and journalism, Art and Michael don’t have much in common. Michael is wealthy, and owns the Iowa Cubs baseball team. Art just loves and watches his Twins. Art told of turning over some of his Pulitzer $15,000 to the Iowa Freedom of Information Council and plowing the rest into the operation of the community newspaper. He has started writing a book, with the $100,000 advance going back into the Times to meet expenses.

Two other distinctions ‘tween the two friends and colleagues: Michael wears suit, Art wears overalls. And Michael gleefully pulled out of his pocket, the huge World Series championship ring he earned as part of the Chicago Cubs family.

Regarding the book: in a recent column, Art talked about his book deal. “The story involves interpreting the complex relationships we have built with the land. And it will explore what draws people and keeps them here.”

Art added, “That’s what this book boils down to: an examination of rural Iowa and what drives it. It will be honest and loving. It will be, above all, a story of hope sustaining a community that has clear values. It will, I hope, call us back to those values that made Iowa great: tolerance, a sense of pulling together, a respect for civil rights and civil society, and valuing our land above all.”

Art said he will take a bit of a sabbatical to write the book, but will continue to write editorials and his column. Brother John will absorb more of the news editing duties.

Michael Gartner teased Art for the working title of the book, “Storm Lake,” as not being very creative. But as Art wrote, “If you like the newspaper you will like the book. If you love Storm Lake you will love the book.”

The mutual respect between Gartner and Cullen was obvious to the most casual observer. (The two worked together at the Ames Daily Tribune during the 1990s.) The former had thrice nominated the latter for the Pulitzer, but noted his nominations never took, so he left it to Art to self-nominate last year. The competition was tough. The Storm Lake Times editorials were up against those of the name-brand Washington Post and Houston Chronicle. Michael noted that the Washington Post has more employees than the Storm Lake Times has subscribers.

The two Pulitzer Prize-earned journalists share another passion: They do not understand or tolerate people who want to do the public business – and then go behind closed doors to do it. On that, most all of us in attendance agree.

UPDATE from desmoinesdem: The Iowa Freedom of Information Council put the video from this event up on YouTube.