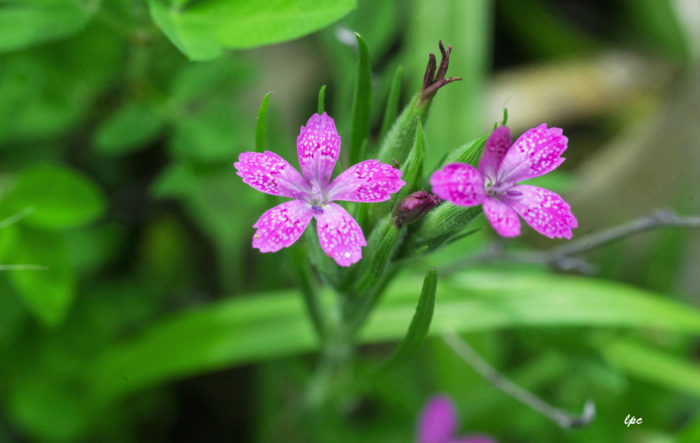 One summer about 15 years ago, I was walking a path at the Pioneer Ridge Nature Center near Ottumwa and saw among the green plants one stunningly bright, tiny pink flower. Finding out what it was took years! It was not listed in any of the wildflower reference books I had at the time. After seeing more of the tiny bright flowers over the years and then obtaining internet access to wildflower databases, my efforts produced a name and its origins. The brilliant little Deptford pink (Dianthus armeria) is indeed wild, naturalized and, according to uswildflowers.com, is found sprinkled about in 47 of the 50 states—but it is not native to North America. It’s from Europe and is fairly common in western and central Europe but in decline in England.

Here is a side detail of the flower head with blossoms and seed capsules:

The Deptford Pink has attractive flowers, but they are quite small. This plant is easy to overlook until it begins blooming. The Deptford Pink is fairly easy to identify in the field because of the appearance of the flower petals: they are usually more narrow than the petals of other Dianthus spp., their outer edges are toothed, and they have small white dots across the surface. The flowers of this species are smaller in size and less showy than the flowers of Dianthus spp. (Pinks) that are commonly cultivated in flower gardens.

To say that it is easy to overlook until it begins blooming is an understatement—I have never found it until it blooms—then its brilliance shines amongst everything else as this photo shows with one tiny blossom among the monarda leaves:

Each flower has five pink petals with small white dots. It is described in detail at the Illinois Wildflower site as:

Each flower is about 1/3″ (8 mm.) across, consisting of 5 spreading petals, a tubular green calyx with 5 teeth, 10 stamens with pink anthers, and 2 styles.

The stems are thin, round and stiff and about 6-12 inches tall with a few spiked leaves. There will be one or several flowers at its top. The stem, seed pods and flowers are shown in this photo:

The seed heads formed are elongated capsules with numerous seeds for reseeding itself by splitting open once dry, though most will never germinate. The Wildscreen Arkive site says:

[It]is an incredibly prolific seed producer. Each plant can shed up to 400 seeds….. . Seeds disperse in late summer and a rosette of leaves grows the following year. The plant finally flowers the year after that.

Habitats include pastures, abandoned fields, areas along roadsides and railroads, paths along the edge of woodlands that are irregularly mowed, grassy meadows with a history of disturbance, and miscellaneous waste areas. This species declines in high quality habitats because it isn’t competitive with many broad-leaved perennial forbs.

This photo shows the largest number of plants I have seen together—most often I see just a sprinkle of them in any one place.

The flowers are believed to be attractive to various butterflies, bees and other insects but are harmless to herbivores—and a delight to the human eye. Enjoy them now in odd, dry places. Look for them in the mornings as they close in the afternoon. Their blossom season is long—June until September—so you should have a while to find the Deptford Pink (Dianthus armeria) in your area.