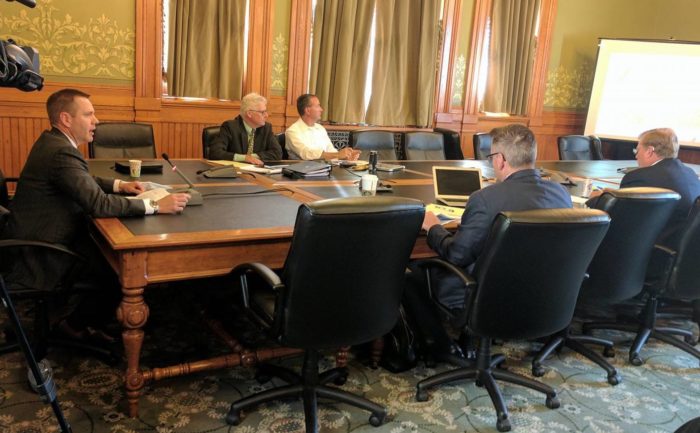 Tyler Higgs is an activist, concerned constituent, and candidate for school board in Waukee. Click here for background on the Iowa Public Employees' Retirement System (IPERS) and here for more on the conservative group a GOP senator brought in to "study" the pension fund. -promoted by desmoinesdem

It was standing room only on July 25 in the cramped Senate hearing room, where State Senator Charles Schneider of West Des Moines (Senate district 22) bucked Iowa law to schedule a last-minute mock hearing to discuss the fate of Iowa’s teachers and public employees. Will they have a respectable hard-earned retirement, or will they subsist on cat food?

You would think a question of this importance would be discussed in a non-partisan committee meeting, open to input -- pro and con -- from the public. Not in this scenario.

The process started somewhat normally. (You can watch the video here.) Donna Mueller, CEO of IPERS, presented facts about how retirement benefits are funded and how adjustments to funding assumptions are made. To its credit, the non-partisan board did a really excellent job of explaining the nuances, details, as well as pitfalls in the way it has made decisions and the ways that they are continuously correcting for market adjustments.

What happened next was like nothing we have ever seen before: Senator Schneider invited two representatives of a libertarian think tank organization, the Reason Foundation -- a clearly partisan organization whose co-founder coined the term “privatization” -- and gave them equal time to present their alternate, biased conception of reality. No left-wing groups were invited to comment. The labor unions were left out of the discussion. Most disgustingly, the people weren’t allowed to weigh in on either side of the debate.

This is what angers me the most. The undermining of the processes of our democracy should never be ignored and should be called out and stopped at once. Regardless of how you feel about IPERS, we must all come together to fight for our democracy and the processes that keep it true.

Senator Schneider needs to end this partisan charade and begin acting in good faith for the People of Iowa. If we want to have a discussion about IPERS, let’s leave the out-of-state think tanks out of this, and make decisions like Iowans are supposed to -- democratically and in a bipartisan (or non-partisan) fashion.