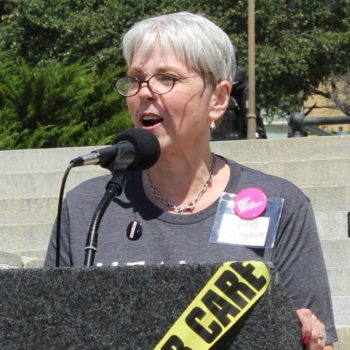 Our health care on the line

Ruth Thompson shares her remarks from the Our Lives on the Line health care rally in Des Moines on July 29. She has previously described how the Affordable Care Act saved her daughter from potentially severe medical complications and crushing debt. -promoted by desmoinesdem

I’m a person with lived experience with disability and I’m the vice-chair pro-tem of the Disability Caucus of the Iowa Democratic Party, I serve on the board of the Central Iowa Center for Independent Living and a very active member of the Polk County Democrats.

I'm speaking as a representative of those groups and as an individual who cares about health care.

According to 2014 data from the state of Iowa data center there are 353,435 people with disabilities in Iowa.

95.4 percent of them had health insurance and for a majority of them, that insurance is Medicaid.

Medicaid has long been the health care safety net for people with disabilities.

Medicaid matters to people with disabilities in ways that many of us can't even imagine For many people with disabilities Medicaid provides more than access to the doctor. It provides durable medical equipment like wheelchairs. And non-durable supplies continence supplies. It covers emergency and non-emergency medical transportation. In some cases it provides nutritional assistance. It provides chore and homemaker services and personal attendant services to keep people living in their homes and communities.

Typically, if people don't have home- and community-based Medicaid services they have to live in a nursing home.

But if Medicaid is capped and block-granted, it's possible that there won't even be nursing home funding. It frightens me to think about what current health care bills will do to people with disabilities. Medicaid Expansion, which was part of the Affordable Care Act has brought access to health care within the reach of a great number of Iowans, including a great number of Iowans with Disabilities.

So far I've given some facts about Medicaid but I want to tell you about someone that I love who doesn't use Medicaid for his health care. But he's benefitted enormously from the affordable care act.

Howard and Mary Ann Claytor are folks like us. They live in St. Albans, WV just outside of Charleston, which is the state capitol. Howard works in the chemical industry that lines that Kanawha River in West Virginia. Mary Ann, like I did, works for the State of West Virginia. They’re good, solid working people who want the best for their family.

I don’t know them from our jobs. I know them from our children. My daughter, Ashleigh and their son, Cedric grew up together. Cedric is a good-looking smart, funny, engaging and kind young man. He was an athlete, excelling in gymnastics and he was the first male cheerleader in the history of St. Albans High School. It seems like I’ve always known Cedric. I took a trip to South Africa when my daughter was in Jr. High school and although my daughter was not remotely interested in traveling to Africa, Cedric was. Our running joke was that the next time I went, I’d take him instead of Ashleigh. But it wasn’t really a joke. I absolutely would have taken him with or without my daughter had the opportunity presented itself.

As children do, ours grew up. After graduation, I moved my daughter and I to the Midwest. She went to WIU to become a teacher and and Cedric went to WVU to become an accountant. I began to hear that Cedric wasn’t doing well physically. He began to develop a series of blood clots that would temporarily incapacitate him. This continued to re-occur and he had to drop out of school. Eventually Cedric was diagnosed with an extremely rare liver disease, Budd-Chiari Syndrome that was causing these blood clots throughout his body, eventually destroying his liver and requiring a transplant. Fortunately, Cedric was covered under his father’s employee insurance, which is, relatively speaking, a really good health plan.

About 4 years after the transplant, Mary Ann noticed that Cedric had developed a slight limp. It was the beginning of another decent into illness when Cedric was diagnosed with a second rare condition, possibly inherited from the donated liver, Neuromyelitis optica which affects motor function. The Claytors have shifted their focus from recovery to palliative care as their son developed paralysis. He now has a teacheotomy to assist with breathing and receives nutrition through a feeding tube. He has to be shifted frequently to prevent pressure sores His movement is primarily limited to his eyes and mouth.

Howard continues to work to support their family, but Mary Ann left her job with the state to be Cedric’s full-time caregiver, essentially turning their home into an intensive care unit with breathing machines and monitors, a manual lift and feeding tubes to keep Cedric alive.

Even before his transplant, Cedric’s medical bills were at 600, 700, eventually, 800 thousand dollars. They began to get letters from their insurance company that said payments for his care would soon end because they were reaching the million dollar cap on even his father’s outstanding health policy. Just about a month before that would happen, the Affordable Care Act kicked in, eliminating the lifetime cap.

They didn’t buy their insurance through the ACA marketplace, nor do they qualify for Medicaid. But one part of the ACA removed a barrier that would otherwise have destroyed any chance they had to pay for the care that Cedric needs to stay alive and at home.

Howard shared that although they both earn good salaries, if it weren’t for the ACA, Cedric would have been dead a long time ago and they would be out on the street because of the cost of their son’s health care.

They were given a reprieve but only a temporary one. For the past 7 years, the GOP has been threatening and trying, unsuccessfully, to repeal the ACA. The Claytors find themselves living in fear and uncertainly. They’re unsure that the terms of their current insurance will be revoked in the rush to repeal and maybe or maybe not replace.

Mary Ann shared that they’re not rich, they’re middle class, but that keeps getting beat down. They worry about any executive order or new legislation. Waiting for the other shoe to drop and what that would mean for their son.

People who are insured by Medicaid and people for whom the ACA hasn't worked out so well. Our health care matters – for many of us it’s life and death.

I’ve talked a lot about the current state. I’m going to take just a minute to talk about some next steps.

Just as a disclaimer, I am speaking now solely as a policy wonk and have researched health care delivery systems for years. I represent nobody but myself for this part of my speech.

Some of our great democratic Iowa lawmakers are proposing a Medicaid for All solution to carry us over. I’m excited about that. But even that is in question, depending upon what happens on a national level. And because Medicaid is a federal-state partnership in which States have a great deal of say in what it pays for and how it covers beneficiaries, it’s not portable or even alike from state to state. It’s a great band-aid but it’s not great for long term.

One of the first things I learned is that Medicare has only a 3 percent overhead while insurance companies have around 33-35 percent overhead. In Iowa, we have three MCOs, which are in essence insurance companies at play in our Medicaid system. It’s no wonder that the can’t seem to operate within the budgets they’ve been given by DHS – As players in the for-profit world, they’re not meant to.

Additionally, if you consider every dollar that employers and individuals spend on health care and add that to the cost of heath care to the government, we could, as a nation have a universal, national health system that costs much less than we are currently spending, leaves nobody out and would give us much better health outcomes than we have now.

I’m part of a group, Medicare for All, that is proposing just that: Slightly tweaking and improving Medicare to eliminate donut holes in coverage and eliminating the need to purchase most supplemental insurance coverage so that every American, regardless of where they live or travel in the US can have access to health care.

I urge lawmakers of both parties and on both a state and federal level to listen to the concerns of their constituents and to people who have expertise in health care delivery systems to consider Medicare for All as the best, possibly the only solution for health care in the US.