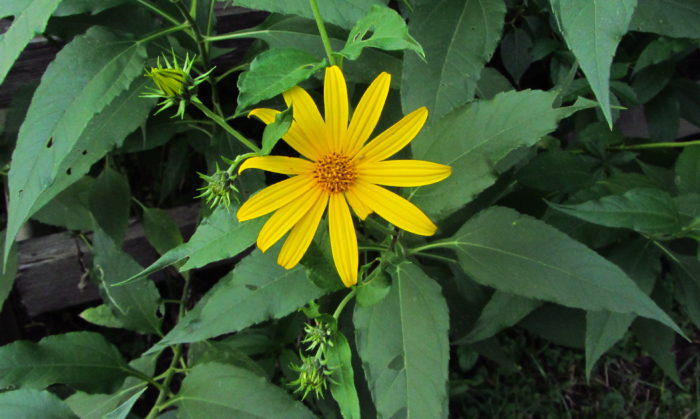 Although Jerusalem artichoke (Helianthus tuberosus) has nothing to do with the historic city in the Middle East, I thought it would be appropriate to feature these late summer wildflowers on the eve of the Jewish new year, Rosh Hashanah.

Why are these plants, native to most of North America, called Jerusalem artichoke? One theory: "The Jerusalem part of the name probably came from a mispronunciation of “girasole,” which is Italian for 'sunflower.'" During the 17th century, European explorers found what had been "an important food plant for native Americans" for centuries and brought tubers back to the European continent.

Plants are still grown today for harvest of the tubers which begins about 2 weeks after the flowers fade. Each plant typically produces 2-5 pounds of tubers per year. Raw tubers have a nutty flavor. Tubers may be grated raw into salads, boiled and/or mashed somewhat like potatoes, roasted or added to soups. Unlike potatoes, tubers do not contain starch. They do contain inulin which converts into fructose which is better tolerated by people with type 2 diabetes than sucrose.

Some people find the taste of the tubers (called "sunchokes") similar to artichokes. If you decide to grow these plants, be aware that they can spread aggressively and "are difficult to remove from the garden. Tiny pieces of tuber left in the soils will sprout."

Jerusalem artichokes are blooming now near many Iowa trails and roadsides. I took all of the enclosed pictures on trails that run along the banks of North Walnut Creek in Windsor Heights or Walnut Creek in Des Moines.

The Minnesota Wildflowers and Illinois Wildflowers websites are good resources for botanically accurate descriptions of this plant. The foliage appears in the early summer; "Leaves are up to 10 inches long and to 5 inches wide, gradually tapering to a point at the tip and abruptly narrowed near the base, on stalks from ¾ to 3 inches long that are often winged."

A bud is visible on the plant in the foreground:

As with other members of the aster family, what looks like one Jerusalem artichoke flower is in fact "a dense head of disk florets that are surrounded by 10-20 ray florets," which look like petals. Flowerheads are opening on these plants:

Most Jerusalem artichoke plants are between three and ten feet tall. Last week in Windsor Heights I found the smallest one I've ever seen blooming. This flowerhead was barely a foot off the ground:

Jerusalem artichoke has a fairly long blooming season. On the same plant you may find some flowerheads opening while others have lost all their ray florets:

Pollinators are still sampling these flowerheads, which have started to lose ray florets:

I often see Jerusalem artichoke growing alongside various kinds of goldenrod. These goldenrods were just starting to flower in August:

These goldenrods were at their peak earlier this month:

In this shot, Jerusalem artichoke is blooming near giant ragweed, the bane of seasonal allergy sufferers:

Most of these Jerusalem artichoke plants have finished blooming. Ragweed past its prime is in the background: