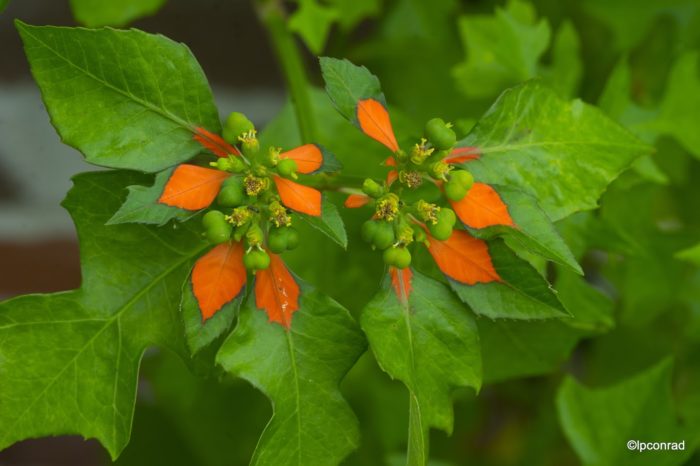 Thanks to Lora Conrad for sharing her photographs and describing this colorful plant. I had no idea wild poinsettia was native to Iowa. -promoted by desmoinesdem

How would you like to have a plant with fiddle-shaped shiny green leaves with brilliant red or orange-red at the center on the top leaves, showing off for months? 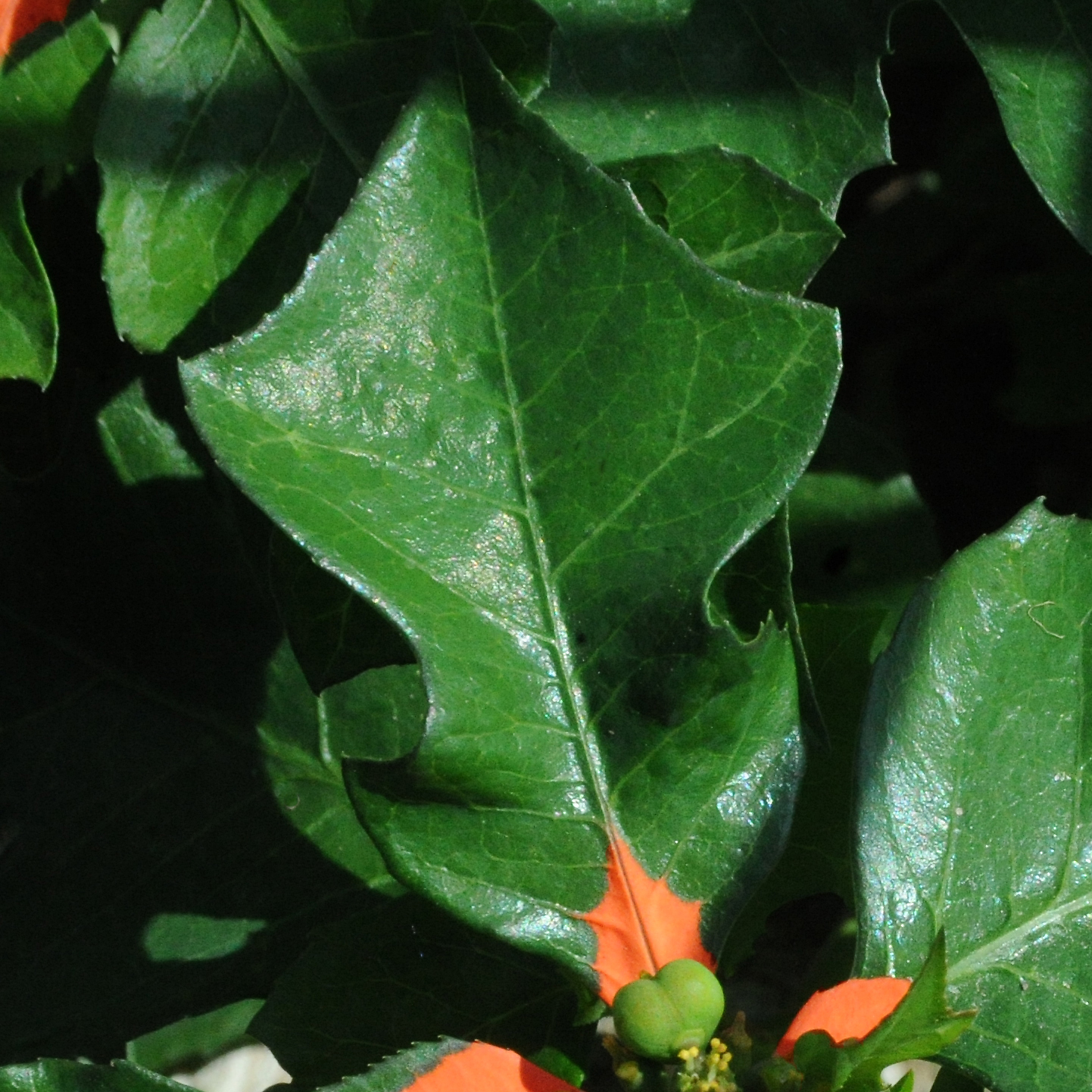 Unlike its tamed and modified cousin, the Christmas Poinsettia, there is no need to schedule light exposure and pamper for color. Just toss the seeds amongst your mid-height wildflowers or in front of your background flowers and stand back! That’s the Wild Poinsettia (Euphorbia cyathophora) — an easy to grow charmer that the insects where I live all love. In fact, its hard to make a photo without some type of bee in it—honey bees, bumble bees, green sweat bees and various other small bees are all attracted to its little yellow flowers in the center of the plant. However, the honey produced from the flowers is said to be acrid and unpleasant to eat. 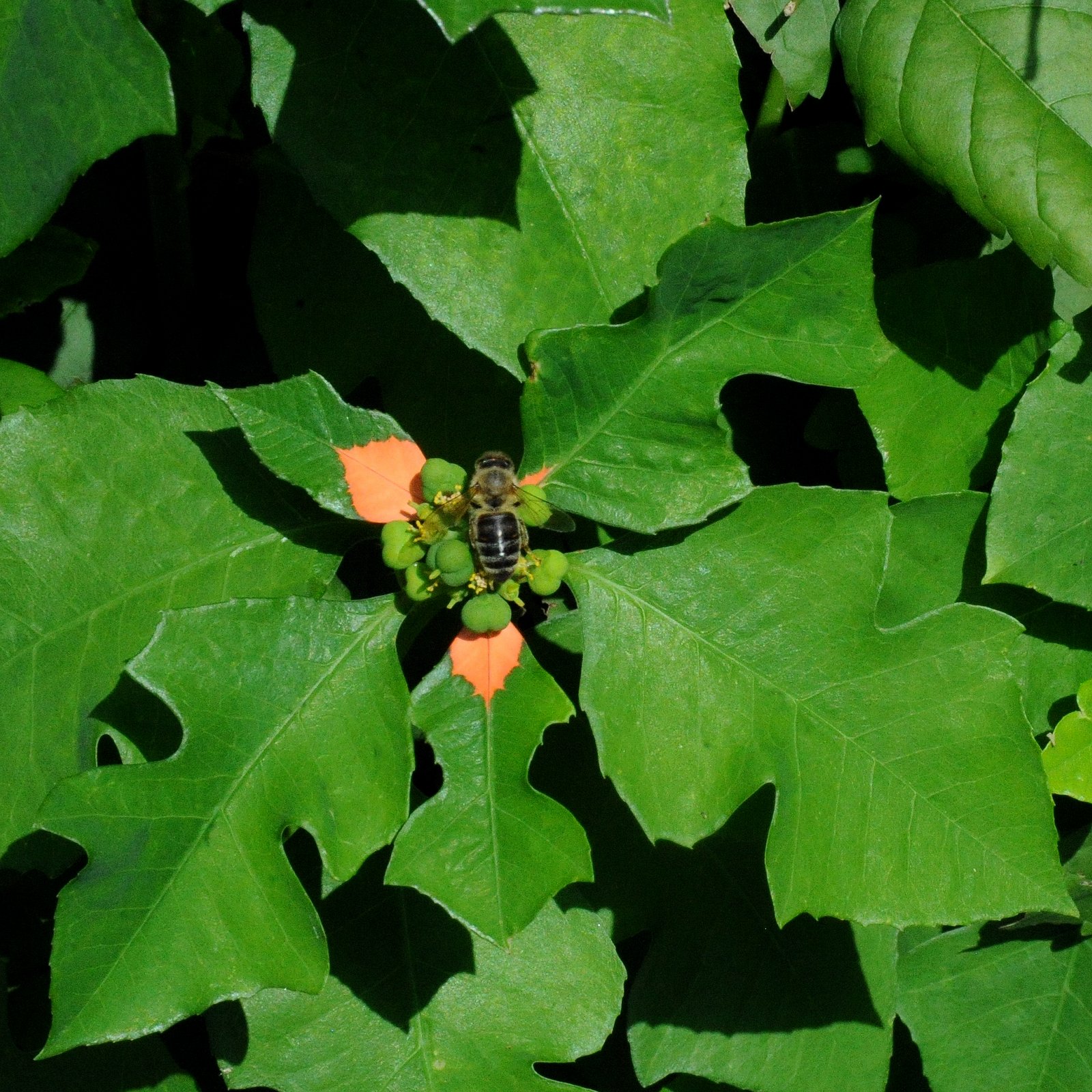 And yes—this is a native plant that the Wildflowers of the United States website says is found throughout the midwest and southeast, including Iowa. However, my experience is that it is not all that common in Iowa despite being native. The ones I have seen here are spreading happily in my yard without assistance. They are from seed I first obtained from my grandmother’s yard in Alabama about 40 years ago. The Illinois Wildflower site says that they are “widely scattered across Illinois, where it is uncommon to occasional.”

The Wild Poinsettia has numerous common names— Fire on the Mountain, Mexican Fireplant, Painted Euphorbia, and Desert Poinsettia. In addition, there is confusion over Euphorbia cyathophora vs. Euphorbia heterophylla. This is elaborated upon at Wildflowers of the United States site as:

Euphorbia cyathophora can have either the violin-shaped and ovate leaves shown on the plant here, or long, linear leaves I’ve seen on other photos. I originally thought this was the easy differentiator between the two species, but from what I have found so far, that was an incorrect assumption.

With this acknowledgment of a multiplicity of names and official botanical confusion— this article will stay with Wild Poinsettia (Euphorbia cyathophora).

For a botanically accurate description of the plant and some additional photos, refer to the page at Illinois Wildflowers, which is one of the resources used for this article. There are photos there of both the narrow leaf and the fiddle leaf variants.

The Wild Poinsettia prefers to grow in full or partial sun with moist to drier conditions. It grows happily in infertile soil, just grows smaller than in better soil (1 to 2 feet), and grows in sandy or clay soil. In richer soils, the plants quickly grow to 2 or 3 feet and become dense. They are often found in disturbed soil areas.

The hard, black seeds dropped from last year’s plants come up later in the spring as somewhat frail looking and not very impressive green plants that may have oval leaves, thin leaves or begin to have fiddle shaped leaves, as shown below. 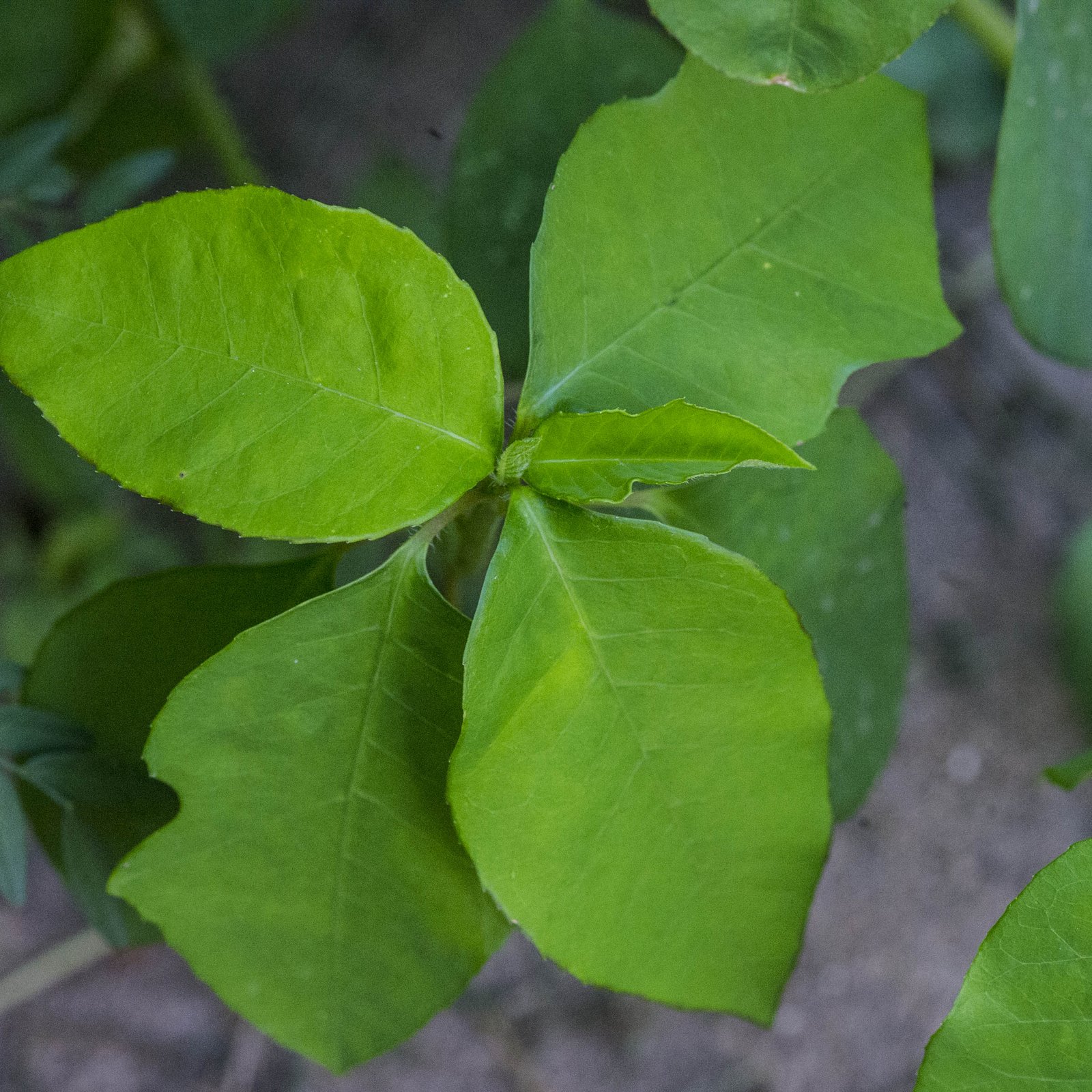 They are easily broken and exude a milky white sap that can be a skin irritant to some people and could cause problems if it got into the eye. The sap is a milky latex that most mammals avoid eating as it can irritate the mouth and digestive tract, causing vomiting and diarrhea if large amounts are ingested. 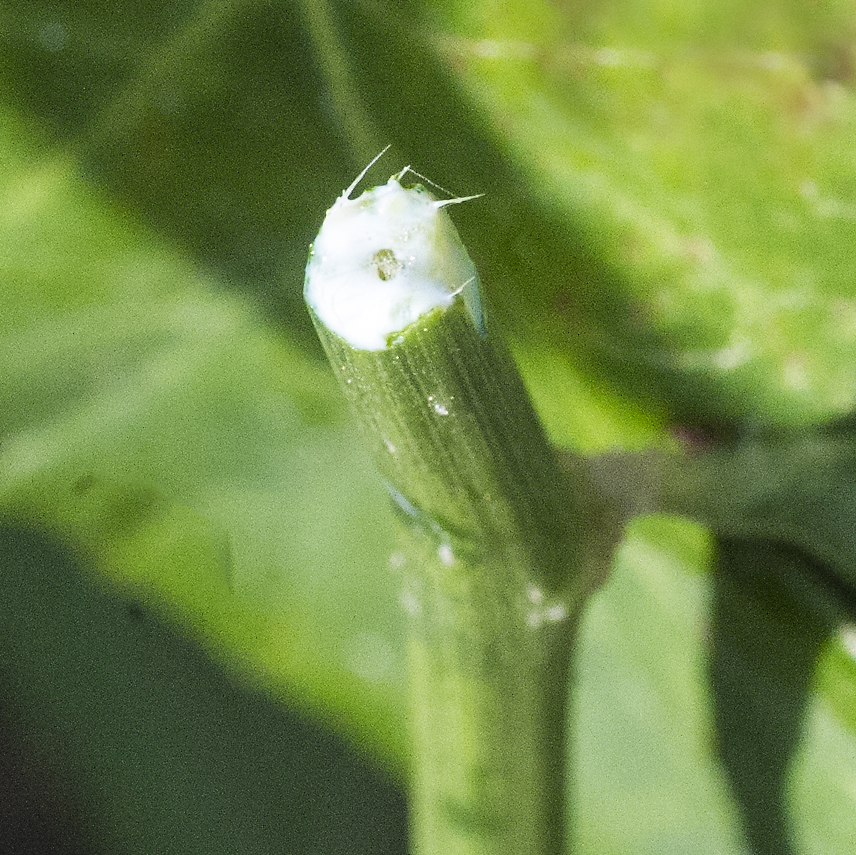 Though an individual specimen will branch out and become bushy, they seem to be very happy to grow thickly, with each plant primarily one stem with smaller side shoots, supporting each other in their effort to stay vertical. 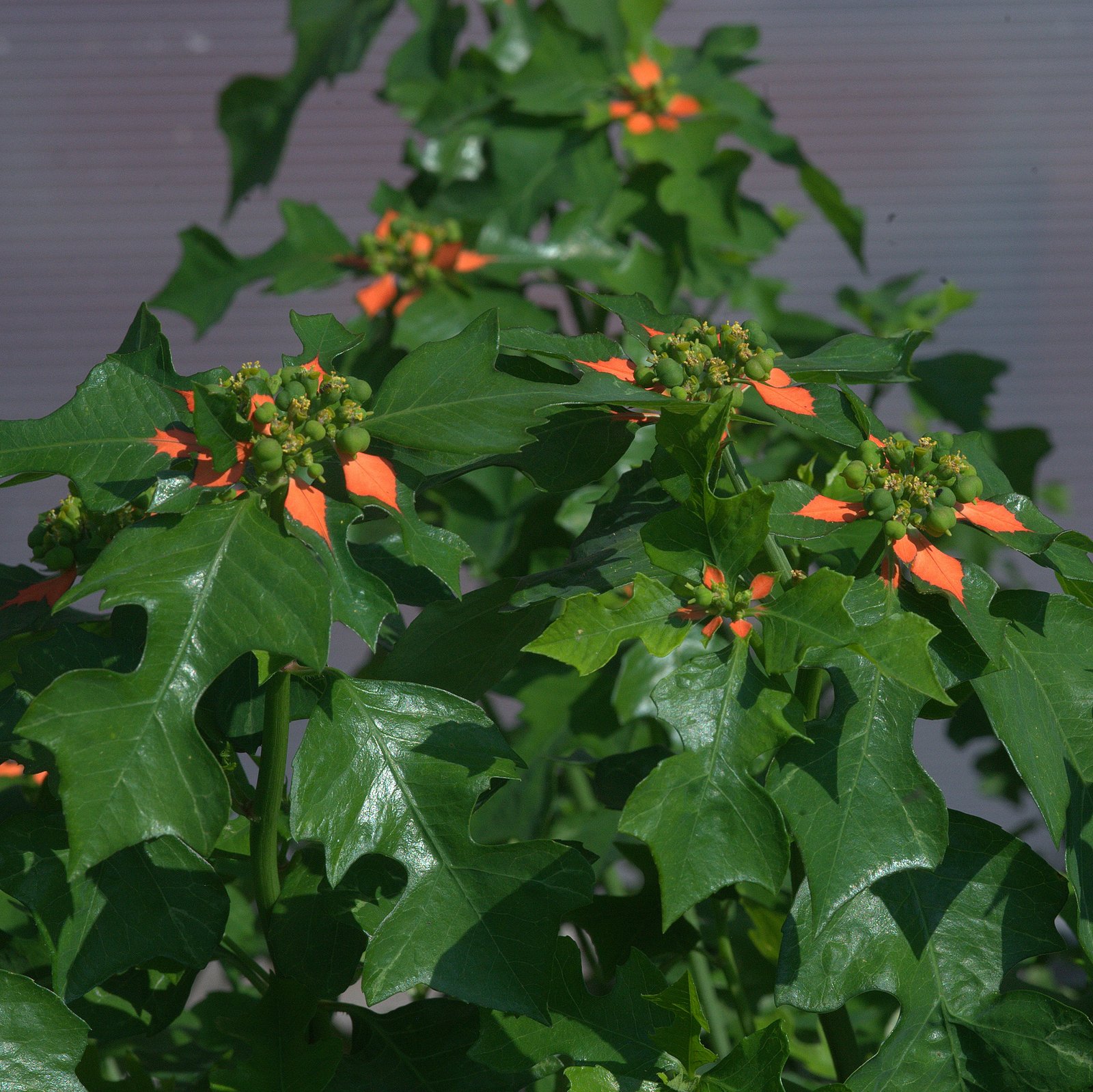 In late summer here in Iowa—about mid August through frost—these plants really begin to shine—figuratively and literally—the leaves become glossy and richer green and the bright red to reddish orange irregular blotches develop on the leaves just below the yellow flowers as they begin to appear.

The variety of shapes and location of the color on each plant varies as the photos below will show. It is usually described as “having striking red bracts that subtend the clusters of yellow flowers.” But that is an incomplete statement—as you can see in the photo below in some cases there are both small bracts with bright color and bright color on the base of the upper leaves. 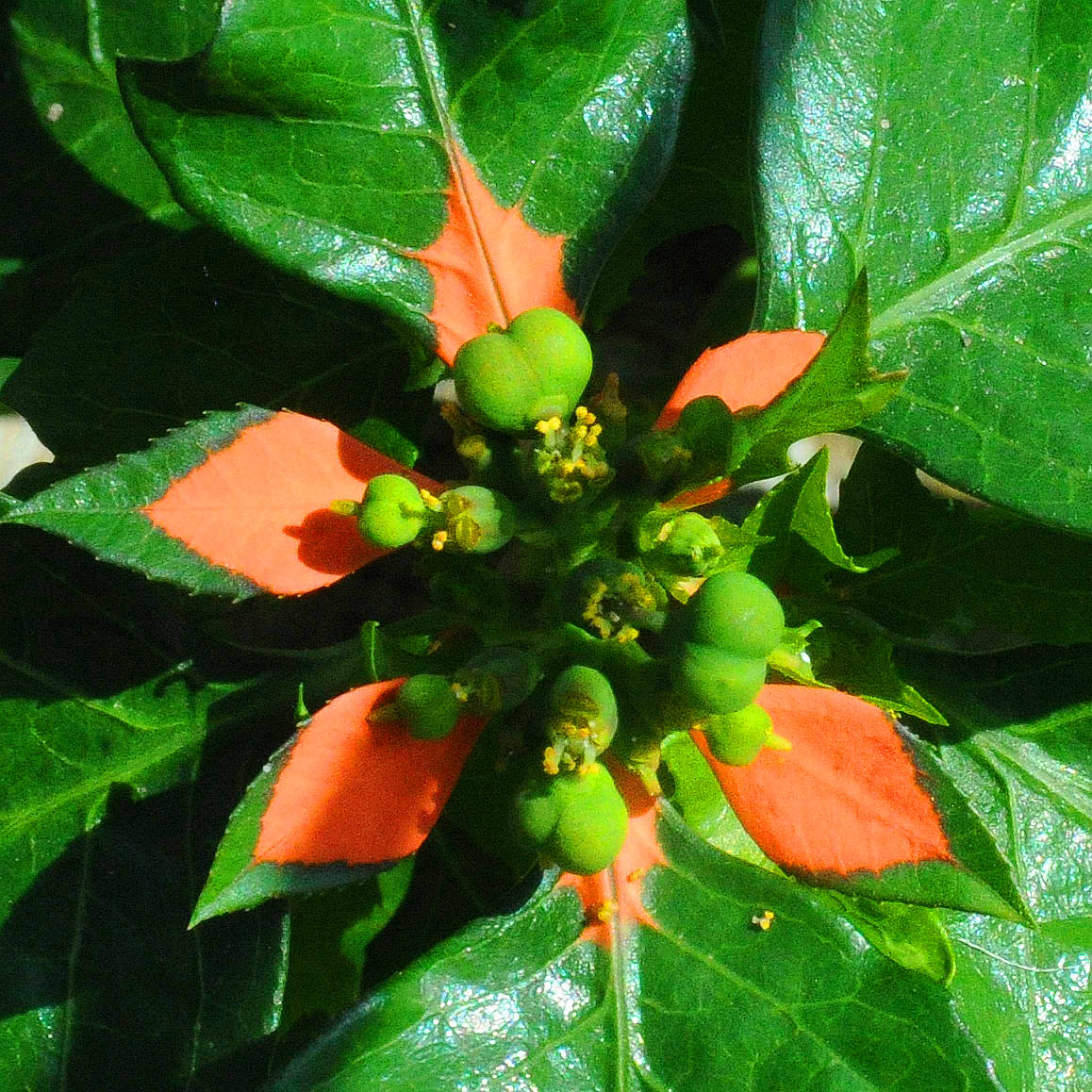 Leaves further down the stem do not develop this coloration. The amount and shape of the colored spot varies. In either case they surround numerous small clusters of yellow flowers that are soon followed by green capsules containing seeds for next year’s crop, as the plants are annuals. These flower heads are described at the Illinois Wildflower site referenced above as:

The upper stems terminate in flat-topped clusters of cyathia (cup-like structures containing several flowers); a single cluster of cyathia can span up to 1½” in diameter. Each cyathium is about 2 mm. across, light green to reddish green, and glabrous; each cyathium contains several male (staminate) flowers and a single female (pistillate) flower. The male flowers are barely exerted from the cyathium, while the female flower is pedicellate. Each male flower consists of a single stamen; its anthers are usually yellow. The female flower consists of a 3-lobed ovary with 3 divided styles (appearing to be 6 styles). 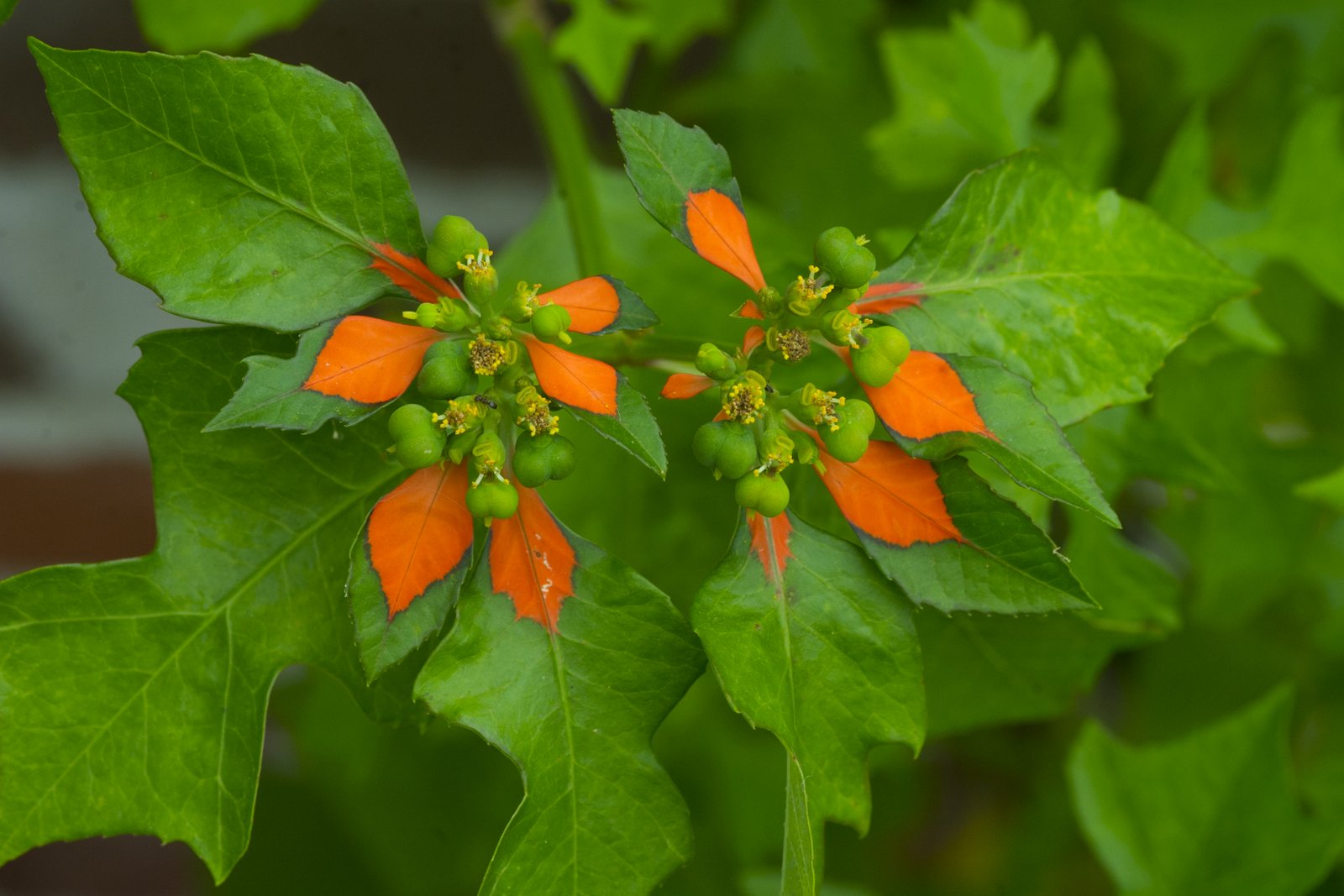 As the season draws to a close, the red splotches will begin to develop white spots when there are few to no blossoms but a lot of green-colored seed heads with mature seeds. At this point, frost usually brings the show to a quick end for another season. 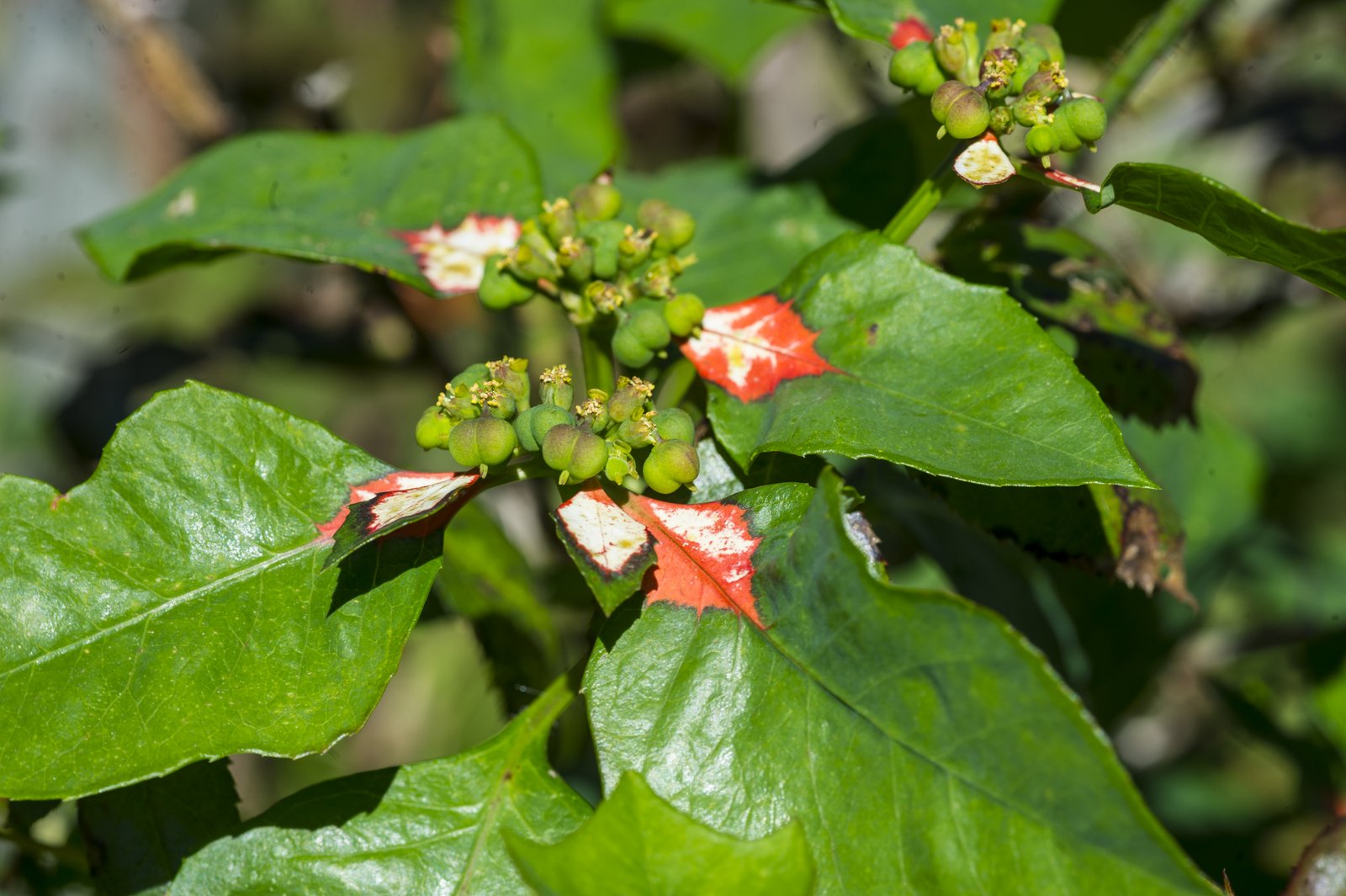