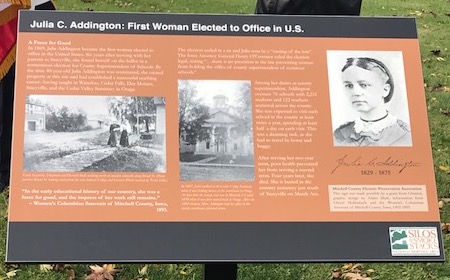 Many thanks to Kurt Meyer for sharing his prepared remarks from an October 22 event dedicating a sign in Stacyville (Mitchell County). Meyer encouraged me to give credit to Cheryl Mullenbach, who “more than any other person, brought Julia Addington’s story out of obscurity and into the light of public recognition.” Mullenbach’s article, first published in Iowa Heritage Illustrated in 2007, is on the Stacyville town website and well worth reading. -promoted by desmoinesdem

My name is Kurt Meyer. I am a proud member of the Mitchell County Historic Preservation Association. Today, we gather to honor Julia Addington, one of our remarkable local contributions to the rich, unending flow of history.

Perhaps because history is always in motion, it’s challenging to time-travel back… back to 1869, 148 years ago this month, to October 12, when Julia Addington was elected. Julia Addington – a woman! Bear in mind, women in the U.S. could not vote until the 19th amendment was ratified… something that didn’t happen for another 51 years.

Now, I know I should have told you this as you entered the room today, but this isn’t really the Stacyville Public Library. It’s a space capsule – also known as the “Wayback Machine” – and you and I together are about to time-travel. Hold on to your hats, buckle your seat belts, and ignore the calendar on your cellphone.

Let me tell you a bit about what’s going on in the world as we know it… but I’ll say in advance, I’m not sure you’re going to like it. Things are happening SO fast; it seems the world is spinning out of control! Let me tell you what I mean…

– In January of this year, 1869, Elizabeth Cady Stanton, a WOMAN, testified before the US Congress, the first female ever to do so. Imagine that!

– The same month, January, 1869, the P.E.O. Sisterhood, a philanthropic educational organization for women, was founded at Iowa Wesleyan College in Mount Pleasant, Iowa. IF I could look into the future, I would know that in 2017, this same organization, now known as P.E.O. International, would be headquartered in Des Moines.

– On March 4, General U.S. Grant was inaugurated. He’s now PRESIDENT U.S. Grant. I sure hope that turns out okay.

– In March of 1869, a team calling themselves the Cincinnati Red Stockings became the 1st professional team playing a game they call baseball. I can’t imagine this baseball fad will last very long. Incidentally, for what it’s worth, the name “Red Stockings” seems a bit long. They should think about shortening it to just the Cincinnati Reds.

– Another baseball story. In November, 1869, a child named Clark Griffith is born in Missouri. He has a remarkable career in baseball… as a player, a manager and, eventually, team owner of the Washington Senators. His adopted son, Calvin Griffith, is also a baseball man and 92 years later, son Calvin – then running the Washington team – moved the Senators out of Washington onto the Midwestern prairies, and renamed the team the Minnesota Twins. It’s hard to estimate the hours of joy, and it must be admitted, the hours of heartache, rooted in this decision.

– On May 10, 1869, the Golden Spike is driven into place at a pinprick on the map named Promontory Point, in Utah (except Utah doesn’t become a state for another 27 years, but I digress). We now have a transcontinental railroad in the US, meaning we can travel from one coast to another all by way of rail. Just so you know, it will take about a week, assuming no unscheduled stops.

– But this is not the only railroad news. In 1869, the Cedar Falls & Minnesota Railroad Company pushed up along the Cedar River and reached almost to the Iowa – Minnesota state line. A little village was platted by Mary Agard & Benjamin Agard, a village that eventually became known as Mona (how I love that it was platted by both a man and a woman… I bet she did most of the work). A two-story depot was erected in Mona in 1869. For good or ill, family members of mine have lived near Mona beginning 15 years before the rail line arrived. That’s 163 years. I imagine they were as thrilled with the coming of rails to Otranto Township as people were in May at Promontory Point.

– Mona wasn’t the only Iowa town created in 1869. LeMars, Perry, Van Meter, and Waukee were all founded in 1869. I suspect all were railroad towns or towns created by the arrival of rail travel. Van Meter, of course, was the boyhood home of Bob Feller and Waukee was recently chosen by Apple for the operation they’re bringing to Iowa. And to think, Apple could have chosen Mona… there’s ample property available!

– Also in Iowa in 1869, the Iowa Board of Immigration published booklets in several languages – English, German, Dutch, Danish, and Swedish – to encourage European immigration to Iowa. Note: Norwegian is NOT one of the languages mentioned, perhaps because there was already a steady flow of immigrants from Norway making their way to North Iowa.

– In July, a French chemist, Hippolyte Méga-Mouriès, received a patent for margarine, a substance that could substitute for butter, an assignment he had been tasked with by the French Navy. Some 80-plus years later, because the dairy lobby was sufficiently strong in Minnesota, the only margarine available in the state north of us was white… and included a packet of yellow dye should you want your margarine the color of butter rather than the color of Crisco shortening. Or… if you lived in nearby Austin or Lyle (Minnesota), you could drive down to the Mona Grocery Store, and buy a case of “Blue Bonnet”, a niche market that sustained the little Mona Store for years.

– In 1869, John Wesley Powell set out to explore the Colorado River and what we now call the Grand Canyon. Gathering nine men, four boats and food he hoped would be sufficient for 10 months, he embarked from Green River, Wyoming into Terra Incognita. Passing through dangerous rapids, Powell’s group passed down the Green River to its confluence with the Colorado River, near present-day Moab, Utah, and completed the journey on August 30, 1869. I was in Moab, Utah, two weeks ago… and I thought of John Wesley Powell. If you ever wish to read about this remarkable man and his incredible journey, I suggest Wallace Stegner’s “Beyond the 100th Meridian.” [And while this is a tangential point, North Iowans have a slender claim to author Stegner, since he was born in Lake Mills, Iowa, less than 50 miles west of where we’re gathered today.]

– In December, 1869, Jesse James pulled off his first confirmed bank robbery, in Gallatin, Missouri. I like the word “confirmed” in this claim, suggesting he MAY have committed earlier robberies, we just don’t know about them. There is an unconfirmed rumor that he and members of his gang once hid out along the Cedar River in Mitchell County. True? I don’t know. To what extent is TRUTH the standard for a story about robbers?

– On December 10, 1869, women gained the right to vote in Wyoming Territory, 21 years before Wyoming became a state. If we were to time-travel forward to 2017, we’d note that Wyoming is the state with the smallest population: slightly more than half-a-million people. Through my wife Paula’s work at American Express, now almost two decades ago, I met several people from Wyoming she worked closely with at AmEx. One was US Senator Alan Simpson. The first time I met Senator Simpson, we talked about John Wesley Powell’s trip down the Colorado River, a journey that, as I mentioned, began in Wyoming. When I encountered the Senator a year later, it was in a parking garage, as we both were getting out of cars en route to dinner. He saw me at a distance of some 30 yards, pointed a bony, accusatory finger at me, and said, “Wallace Stegner, Wallace Stegner.” He didn’t remember my name… but he recalled our cocktail topic of the previous year: Stegner’s “Beyond the 100th Meridian.”

My friends, on October 12, 1869, Mitchell County voters did something that had never been done in this country before. They elected a woman to public office. Her name was Julia Addington. In what I regard as one of those quirks of history, Julia’s election was not finally determined by voters but rather by a flip of the coin, since voter results ended in a tie… 633 to 633. Imagine – had the coin landed on the other side, I doubt we’d be here today.

As county superintendent, Addington oversaw 76 schools — including three log schoolhouses — with 2,231 students and 122 teachers scattered across the prairie. Accounts suggest that she traveled to visit these schools, in many cases multiple times each year. Assuming she visited schools in nearby Burr Oak Township (and she undoubtedly did) she would have encountered a stout and sturdy 10-year-old boy named (Hannibal) Hamlin Garland, who moved with his family to rural Mitchell County in 1870.

You see, time-travel, like the study of history, can be a wonderful thing. Occasionally, when you look closely at events, patterns begin to emerge… sometimes a cycle, sometimes a line. Of course, there are examples when history doubles back or bends over on itself. Then there are times when history, or what we know of it, seems to crumble all around us.

Finally, there are times when all that can be said of history is that a particular moment, episode, or character simply planted a seed. Sometimes it grows; sometimes it dies. Sometimes this planted seed exists in a dormant state, hidden from view, ready to burst forth when conditions are right.

The seed of Julia Addington was planted in our garden 148 years ago. Today, we mark the row where Julia was planted, right here, in Stacyville, Iowa. We take our humble, empty seed packet and post it on a stick for all to see. Finally, like all gardeners, we wait patiently to see what grows. Or, in this case, what grows and grows and grows.

I, for one, can hardly wait.