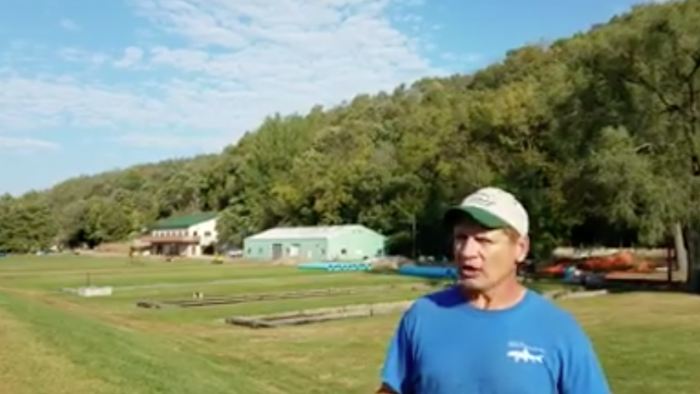 Independent bids for Iowa governor are a waste of time

Brent Roske has ended his independent candidacy for Iowa governor, explaining in a December 26 Facebook post that he will be "stepping back into the media world" soon.

At least one other gubernatorial candidate, Gary Siegwarth, is trying to qualify for the general election ballot as an independent. Like Roske, he has little chance of moving the ball forward on the issues that are driving his candidacy.

Roske's campaign for governor always looked more like a publicity stunt than a serious effort. The one time I saw him speak, at the Progress Iowa Corn Feed in September, he advocated for single-payer health care and stronger water quality programs. Why Roske, since multiple Democratic candidates for governor have called for similar policies? He claimed that running outside the party structure would provide "another avenue to get progressive and Democrat and independent ideas into the statehouse."

In the Facebook post announcing the end of his campaign, Roske said he launched his candidacy because he "wanted to be a part of the conversation" and "share some of the ideas I have about improving people’s lives."

The truth is, though, that hosting a TV show is much, much different than being an active candidate. The conversation in media is mostly one direction but once you’re in a race the swift change in current can be startling. I had run for Congress in California a few years back but Independent candidates are much more accepted there. In Iowa politics you can be an Independent until you announce your candidacy and then people want you to pick a side. People I considered friends from both the Republican and Democratic parties told me that they felt I'd let them down by not running on their team. I would remind them that we’ve already had one Independent President – George Washington – and that the US Constitution doesn’t mention anything about political parties. I’d also offer that we’ve never had an Independent Governor but that Iowa did elect a Whig Party Governor (Abolitionist James Grimes for which the city takes its name) but most folks active in Iowa politics are red or blue with the party infrastructures and databases to go along. The ‘non-party’ people in the middle don’t get fired up and grab pitchforks and torches. Moderates are moderate.

As a candidate, I advocated for universal healthcare and I’m grateful I got the chance to do so. I don’t want our awesome country to become socialist, but I don’t think how you spend your money makes you patriotic. [...] Healthcare needs to be a benefit of American citizenship like police and fire protection, K-12 education, roads & highways, etc.

I spoke about the urgent need to clean Iowa’s waterways. I commend Secretary Northey for his recent work to get a clean water bill ready for presentation to the 2018 legislature but I join thousands of other Iowans in my disappointment that they didn’t get the competing House and Senate bills passed in the last session. This failure was a main reason I decided to run. The tap water in Los Angeles is cleaner than Des Moines’, which is embarrassing and unacceptable.

In a larger sense, I ran as an Independent to discuss how we can improve the process of American government, electing a non-party player to the Executive to arbitrate between the warring factions in the legislature. If you went to a football game and the referee was an MVP of one of the playing teams you’d know that it wasn’t a level playing field. This is what we have at the state and federal levels and electing Independents to the Executive Branch across the country would be the quickest way to improve our democracy and give the parties a bridge to help get things done. [...]

If you’re passionate and outspoken about politics, you should run. Look for a race and go for it because a candidate gets a platform. [...] If you want to help, running for office is a much more effective way to share your ideas than writing destructive posts on the internet to your chosen echo chamber. [...]

Define "much more effective." Roske wasn't occupying a niche left unfilled by major parties. The reason why Iowans encouraged him to "pick a side" was simple: only two people (the Democratic and Republican nominees) will have have any chance of being elected governor next November. Since Roske was never going to be a serious contender for that office, he could never hope to "arbitrate between the warring factions in the legislature."

Moreover, Roske failed to educate himself on one of his signature issues. What nonsense is this? "I commend Secretary Northey for his recent work to get a clean water bill ready for presentation to the 2018 legislature but I join thousands of other Iowans in my disappointment that they didn’t get the competing House and Senate bills passed in the last session."

Secretary of Agriculture Bill Northey has repeatedly used his political capital to block policies that could make real progress toward cleaning up Iowa rivers and lakes. He literally let the Farm Bureau write key portions of his "nutrient reduction strategy." He opposes any numeric standards for nitrogen and phosphorus levels in waterways and any regulation requiring farmers to use soil conservation practices, even on highly erodible land. The all-voluntary approach Northey demands will not solve the problem.

Northey had the Iowa Department of Agriculture's lobbyist register in favor of the water bill that cleared the state Senate near the end of the 2017 session. Look who else pushed for that legislation: Iowa Farm Bureau Federation, Agribusiness Association of Iowa, Iowa Corn Growers, Iowa Pork Producers. Every major Iowa environmental organization (Sierra Club, Iowa Environmental Council, Iowa Rivers Revival, Environmental Law and Policy Center) lobbied against the Senate's approach, for good reason. It would be a "water quality" bill in name only. Keeping that bill from passing during the 2017 session was a victory--likely a short-lived one, as House Republicans will probably send it to Governor Kim Reynolds' desk in early 2018.

Roske apparently understands none of this, though he could have learned the difference between the House and Senate approaches to water program funding by talking to almost anyone who worked with legislators on this issue last spring.

The independent still running for governor, Gary Siegwarth, is almost the mirror image of Roske. Whereas Roske is a media personality and experienced self-promoter, Siegwarth is the opposite of a showboater. I only heard about his candidacy a few weeks ago, even though he announced in late October. Roske would seem to be satisfied with any state action on water quality, regardless of its effectiveness. In contrast, Siegwarth has in-depth knowledge of the problem, thanks to 25 years of experience as a fisheries biologist for the Iowa Department of Natural Resources. In his announcement video, he said,

People often ask me what party am I running for, and I say I'm not running for a particular party. I'm for Iowa, and that's what I want to put back at the forefront, instead of the divisions between parties.

Siegwarth's campaign website isn't loading for me, but his Facebook page calls for protecting natural resources and improving rural communities through a revitalized, more diverse agricultural sector. (The candidate grew up on a Jackson County farm.)

I recently asked Siegwarth why he is running for governor as an independent, give that several Democratic candidates are talking about water quality. Wouldn't his candidacy potentially help Reynolds, the favorite for the GOP nomination, by taking votes away from her Democratic challenger? Siegwarth replied via Facebook message,

I'm trying to find a neutral medium to promote a natural resource-based platform that can appeal to all voters. From the thousands of people I've talked with, it's obvious voters on both sides are really turned off by the division among parties. As an "independent" candidate, I've been able to offer that neutrality and immediately move past being on one side or the other in order to talk about issues. I've talked with the most venomous Trump supporters and haters. One of their first questions is usually, "what party are you?" When I tell them "neither", most are very supportive of that position and we jump right into conversation. If I approached those same voters representing the opposite party, most of those conversations would have ended before anything meaningful or constructive could be exchanged. In most cases, it is difficult to convince the supporter of one party to come to the other side. With the divisiveness in recent years, there has never been a better time to promote some important natural resources based issues from a neutral position. From my conversations with dismayed Republican voters, I honestly believe my candidacy will hurt Kim Reynolds more than it will help because it gives many disappointed voters a neutral option of a nontraditional candidate with a strong voice for natural resources and the common people rather than a more difficult choice of casting a vote for the opposite party.

I'm also trying to put out a more holistic long-term platform regarding water quality funding and policies. In one way or another, everything comes from the land yet voters understanding of those connections are poorly understood. My candidacy provides a dual purpose of educating voters about natural resource and landscape issues. Natural resources connect either directly or indirectly to nearly every other issue. The same solutions that improve water quality also improve soil health, reduce flooding, promote landscape diversity, reduce our impact on other regions of the world (hypoxia and greenhouse gasses) as well as influence rural economic opportunities, education, healthy food, health care, outdoor recreation, and quality of life. It's all connected. The key is laying out this holistic model as a way to promote long-term thinking and sustainable solutions. Water quality funding and policies are just the tip of the iceberg.

I'm hoping this becomes more clear in the coming months.

I find it hard to imagine many disaffected Republicans voting for Siegwarth next November, especially since a Libertarian Party candidate will be on the ballot. Jake Porter and Marco Battaglia are seeking that party's nomination. Libertarians need at least 2 percent of the vote in the governor's race to retain full political party status in Iowa.

Meanwhile, the governor's election represents the best chance to break the GOP trifecta, which has done tremendous damage to our state in only one year. The Republican legislative majorities (59-41 in the Iowa House, 29-20-1 in the Iowa Senate) are probably large enough to withstand a Democratic wave, if one materializes.

To qualify for the general-election ballot, Siegwarth will need to collect at least 1,500 signatures, with minimum amounts from residents of at least ten different counties. The energy he devotes to a gubernatorial campaign would be better spent advocating for local government action to promote rural economic development and good land-use practices, or for like-minded candidates with a chance of being elected to the legislature or to statewide office.