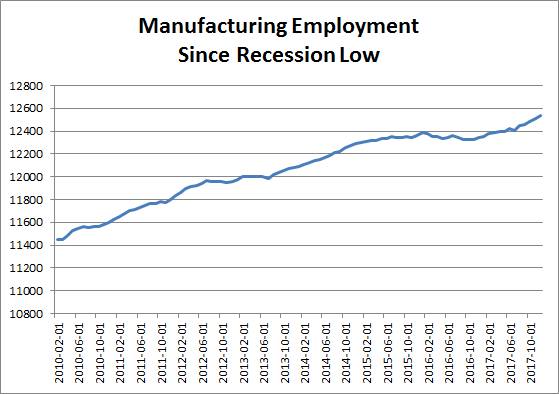 The story has changed, but not the economy

Jon Muller fact-checks some assertions from the State of the Union. -promoted by desmoinesdem

The president bragged about the economy last night, suggesting the dawn of a new era of growth after decades of stagnation. It isn't true. Well, it's partly true. The economy is doing fairly well by most measures. But have we seen any appreciable change in trend?

This post will address four claims made by the president, related to manufacturing, wage growth, black unemployment, and coal production.

The president claims credit for 200,000 new manufacturing jobs. That's based on data through December 2017. It's actually 196,000, but that's reasonable rounding. What he didn't say is that 34,000 of those jobs were actually added before he took office, but let's even give him those.

Employment in manufacturing has grown relatively steadily since the end of the Great Recession. The December 2017 vs. December 2016 comparison was the first and only month of Trump's presidency when the Year over Year (YoY) growth hit at least 196,000. During Obama's administration, the growth in manufacturing jobs on that basis hit that level or higher 21 times. Manufacturing employment continues to strengthen has it has for the past 8 years, but not at any noticeably higher rate of change.

The president's next assertion related to wage growth. "After years of wage stagnation, we are finally seeing rising wages." This is also not true. Wages have been growing steadily since the end of the Great Recession, and they continue to do so. Is it possible to see any meaningful change in trend in this chart? 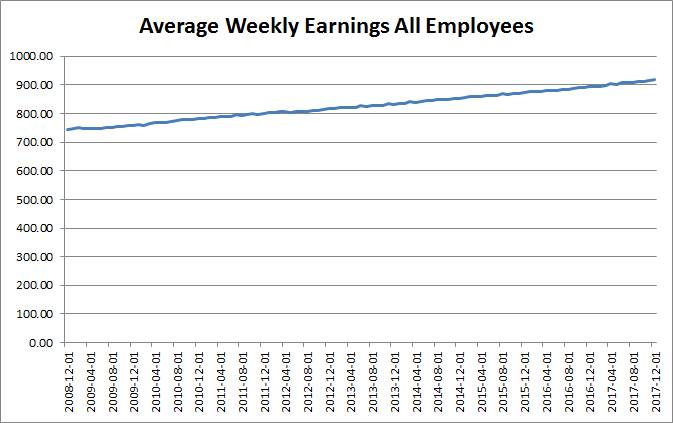 Now, these are nominal numbers, unadjusted for inflation. But the period in question has had relatively stable price inflation. It also displays average earnings, not real earnings. Real earnings data lags by a quarter, but there has been no identifiable change in that trend either: Relatively slow, but measurably positive real wage gains since the end of the Great Recession across the two administrations.

The president loves to talk about black unemployment. You'll recall during the election when he collectively asked black Americans, "What do you have to lose?" On the economic side of the ledger, as measured by unemployment.....not much, it turns out.

This time, the President boasted, "African-American unemployment stands at the lowest rate ever recorded." That's actually true. It's 6.8 percent, which is lower than the previous low of 7.0 percent right before the dot com bubble. And it's lower than the trough of the pre-recession level of 7.6 percent. Below is a picture of black unemployment since the recession peak. (This time, I even put in a little red dot where we saw the handoff to the new administration. You see any change in trend here?) 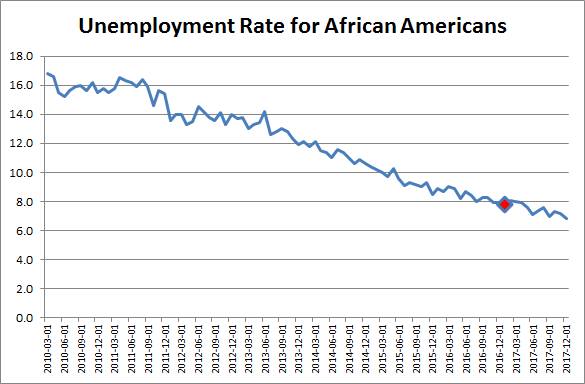 Lastly, we have "beautiful clean coal," as he called it, confirming my suspicion that our president has never seen a piece of coal. He extolled the virtue of ending the War on Coal, which is problematic when the most effective soldier in that war has been low natural gas prices.

Without getting into any extraneous issues such as climate change or commodity substitution effects, let's just look at how many coal jobs this administration has restored. Since taking office, the entire economy in the USA has added 700 jobs in coal mining. We often express massive growth in economic terms in millions. Using this measure, we're talking about 0.0007 million jobs. There are only about 50,000 mining jobs regardless, but there has been no appreciable change. 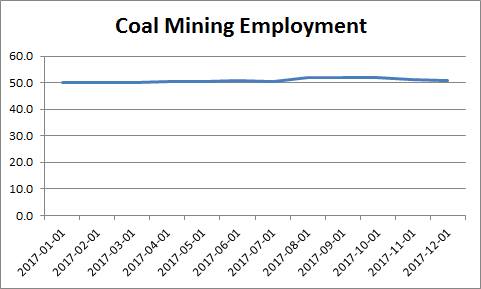 The economy continues to grow, which it will until the arrival of the next recession. The one thing I give Trump credit for is making people believe the economy is improving, which it is. For some reason, President Barack Obama was never quite able to make the sale, even though it was improving just as well for the prior seven years or so, even better. In my view, part of that is a function of Trump's entire party parroting his great success. Obama was constantly taking a hit on the failing economy from both the right and the left.

It will be interesting to see if Trump is able to convince people things are getting better after they start turning for the worse. And let there be no misunderstanding. Things will turn at some point. Or perhaps he'll retain the magic of a leader who takes credit for everything good, and blame Obama or whomever when things start to turn.

Regardless, the economy is pretty good. Has been for many years. And the rate of change in these economic factors does not appear to be measurable, much less meaningful.

All data referenced here are available on FRED--Economic Research from the Federal Reserve Bank of St. Louis.