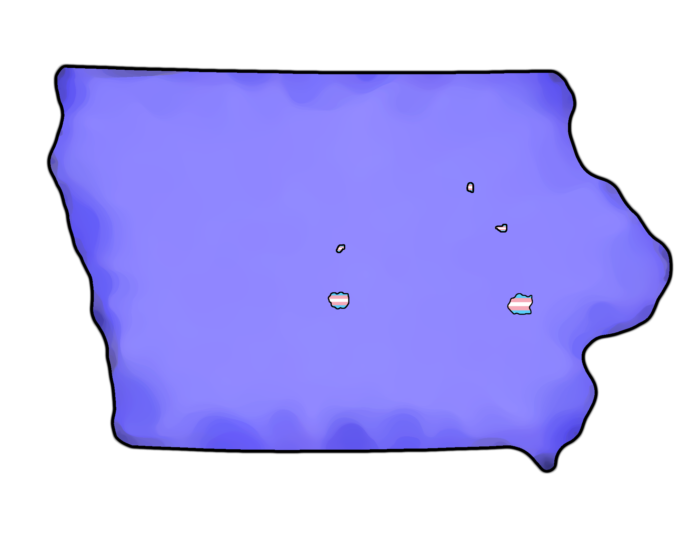 Across the United States, trans health care is an unstable patchwork of "islands." Nowhere is this more evident than in Midwest states like Iowa and Indiana. -promoted by desmoinesdem

LGBTQ issues are increasingly prominent in Western countries during the past decades. In the United States, orientation has been on the forefront of the national consciousness for a considerable time. Since the nationwide marriage equality climax of Obergefell v. Hodges in 2015, however, a different letter of the acronym has assumed the focus - the T for transgender - supplanting orientation with gender identity in social consciousness for the first time in modern history.

Trans individuals, a smaller but notable subsection of the LGBTQ community, are nothing to sneeze at. We are 0.6 percent of the US adult population. That might seem small, but that's nearly two million in 2018 estimates. In perspective, that's about the population of the Las Vegas metropolitan statistical area, the amount of Muslims in the United States, or the total national population of either Latvia, Gabon, Slovenia, or Macedonia.

Iowa, one of the few Midwest states with LGBTQ non-discrimination protections, is on the low end. Of the Iowa population, 0.31 percent or 7,500 people are estimated to be transgender; essentially the population of Knoxville, Clear Lake, Charles City, or Perry. Imagine one of those towns' whole populations having to scavenge for a handful of health care providers statewide and you'll begin to understand the difficulty of securing trans health care in the Midwest.

For Iowa specifically, the Gay Lesbian Medical Association (GLMA) only lists ten LGBTQ accepting/trained primary care physicians in their provider directory, of which only four explicitly offer services such as hormone replacement therapy (HRT). The directory is not a comprehensive list, however if one assumes many times the GLMA number, one still results with a considerable, overwhelming number of trans patients per provider.

Our state's primary islands of care are Des Moines and Iowa City. Iowa City hosts the University of Iowa LGBTQ Clinic, widely regarded as the highest quality in the state, which offers a large range of trans health care in a highly-trained, accepting environment under the direction of Dr. Nicole Nisly and Dr. Katie Imborek. The best known Des Moines providers are Dr. David Yurdin of Primary Healthcare, Inc. and Dr. Joseph Freund of UCS Healthcare/Franklin Family Practice. To be clear, a handful of providers are holding up the majority of Iowa's trans population. This system might appear unstable at first glance, and that's because it is.

Naturally, the reliance of a relatively large amount of trans individuals on a sparse collection of providers makes the system inherently unstable. A recent example from northeast Indiana is a case example. Trans patients scrambled after one of two providers in the area disappeared overnight and left many without basic health care. After having the proverbial rug pulled out from underneath them, most of those patients struggled to find care. Sadly, this is in line with a 2017 national survey of trans individuals which showed that around a third of those trans persons surveyed had received refusal of care, harassment, and discrimination from health care providers.

The disruption of any established trans health care provider will always negatively impact their patients. Whether gradual or abrupt, brief or permanent, the lack of health care prolongs, allows, and encourages suffering. The Iowa system is just as easily disrupted as the Indiana system. If, say, the University of Iowa LGBTQ Clinic disappeared, suffering and death would be a likely result. Like a three-legged chair, the elimination of any of the pillars supporting the meager system will inevitably result in the system, and those supported by it, crashing to the ground.

Rural populations have always had difficulties accessing goods and services of those within the more connected urban areas. The islands of care system fails them the most. Imagine living in the vast ocean without ready access to providers, as shown in the lead graphic above. That is the reality of care for rural trans people in Iowa and elsewhere. Trans individuals in those locations face the prospect of traveling large distance (a considerable cost of time and money) to access care. This is yet another burden on the harsh life trans individuals deal with in the country, which is typically more conservative and discriminatory.

There are multiple barriers present, all with their own issues, which impede trans health care and those who need it:

Trans health care must be legal. Currently in the United States, trans health care exists in a grey area. It is neither explicitly approved or disapproved. What is permissible varies highly on state and the state-federal delineation. The current, building vein of judicial understanding is that gender identity is a subset of sex discrimination, and thus protected. This can be seen in the Affordable Care Act as well as a recent ruling of the Sixth Circuit Court of Appeals.

In Iowa, trans health care is legal, as are legal gender marker changes.

Trans health care providers must be present. While training programs are increasing, they are still woefully small, and most medical professionals, especially doctors, are not trained in the care of trans individuals. Older schools of medical thought are often opposed to the continued existence of trans people. Trans man Jay Kallio harshly discovered this when his doctor, upon discovering his trans status, delayed cancer treatment and instead discussed psychiatry. Also, even if a trained provider exists, many don't wish to have to continually fight the regulation of conservative states to exist and serve their patients.

In Iowa, as previously mentioned, there are some providers, but are located within their islands. Rural Iowans are greatly disadvantaged.

Trans health care must be affordable. In the modern day, health care costs big money, most citizens don't possess such money, and thus most individuals rely on health insurance for care. While primary care visits might be covered by one's insurance, trans health care such as hormone replacement therapy (HRT) and gender confirmation surgery (GCS) vary widely in coverage, despite the current majority consensus view that trans health care is medically necessary among US professional medical associations.

Insurance coverage of trans health care is recent and varies greatly on the source of insurance. Large central Iowa businesses, such as Wells Fargo and Principal Financial, have trans-accepting employee insurance coverage. However, most trans employees aren't so fortunate. Public insurance, such as Medicaid and Medicare, often require court cases to provide for trans individuals.

Trans health care must be well-practiced. Older schools of thought among medical and mental health professionals regarded trans existence as an unacceptable disorder which needed correction. Currently, however, the professions have evolved and moved on, regarding the relics of the past for what they are currently regarded - conversion therapy. Even today, medicalists abound arguing the fallacious position that one must be diagnosed transgender to really be such. There exists a cohort of both professionals and trans individuals who subscribe to the archaic, and absurdly wrong, Harry Benjamin-esque notions of "true transsexualism" being a special, elite class of trans.

Aside from that, general trans treatment standards require lengthy mental health evaluations, "real life experience" periods, and other restrictions most modern trans people regard as restrictive "gatekeeping" behavior that is tantamount to requiring medical approval to be transgender.

In Iowa, most providers ascribe to the "gatekeeping" standards, with only the University of Iowa LGBTQ Clinic showing decent treatment of non-binary trans individuals.

The transgender existence is a political one. Like chattel, our humanity is argued everywhere from nightly news to social media. For many older adults LGBTQ prejudice is more virtue than sin. These social conservatives view inhumane treatment of trans people as warranted, moral, and desire it to be public policy. This can be demonstrated via the anti-LGBTQ "bathroom bills" and "religious freedom" legislation being advocated or implemented in conservative-controlled states.

Here in Iowa, a failed attempt at a bathroom bill (HF 2164) and two moving forward religious freedom bills (SF 2344, SF 2338) have been seen so far in the 2018 Iowa legislative session. Overall, these conservatives believe the right of trans people to decent treatment is less than the rights of them and others to discriminate against us.

Transgender rights and polices are debated at every level of government. From the Obama Administration's pro-LGBTQ advocacy to the Trump Administration's anti-LGBTQ rhetoric, trans existence is a hot topic. However, nationwide most states lack basic LGBTQ non-discrimination laws for employment and housing, let alone health care. Our dehumanization is a party plank for Republicans. They don't want us in bathrooms, schools, military, hospitals, and clinics. This is because they don't want us in society period, as seen recently in Kansas.

Naturally, this opposition makes it difficult to fix the unstable trans health care system. Social conservatives don't wish it fixed, but rather dismantled. Regardless, the trans health care system is broken due to ignorance, prejudice, misinformation, law, policy, and money which have never let it become whole in the first place. It shall remain broken until those roadblocks are removed, however that doesn't mean it is irremediable.

Islands are generally created by fire and worn away by water. Similarly, the erosion of our islands of care can be undone by our passionate advocacy and action for trans health care. This can take many forms. In Indiana, a friend of one of the aforementioned trans patients stepped in and filled the gap in the region, opening a clinic after her medical residency. A new generation of health care providers are being educated and like never before regarding LGBTQ health care. In Iowa, advocacy groups such as One Iowa are leading the fight for better LGBTQ policy and legislation at both the state and local levels of government. The strength of LGBTQ people has always been in themselves and their community.

Everywhere, LGBTQ people, and the T especially, rely on each other to watch their backs, stand up for justice and humane treatment, and fight for a better future for the young LGBTQ people who have and are yet to come into this world. Yes, the system is unstable, but it's always been that way, and it will continue to be that way until we make it better. So while the waves might batter our islands asunder, one active volcanic period creates new land that the waves will need to batter for decades, for centuries, and for millennia to wear away. Hopefully, that is what will come to pass.