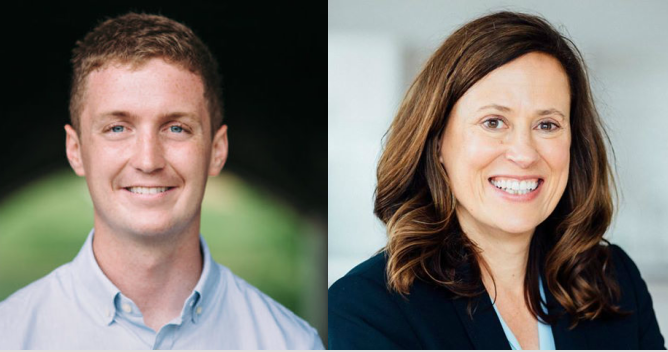 The Democratic primary field for Iowa's third Congressional district is shrinking on the last day of the filing period. Austin Frerick ended his candidacy this afternoon, saying "we could not raise what I believed to be the necessary funding to continue in this race." And Theresa Greenfield's campaign staff were "scrambling" today to collect enough valid signatures to qualify for the ballot, Jason Noble reported for the Des Moines Register.

Frerick explained his difficult decision in a statement enclosed in full below. "In 2018, money remains the largest barrier to participating in our democracy, not just at the campaign level, but also for the single mom who can’t get off work to go caucus for the candidate who she believes would best represent her.” He hinted that he will endorse another contender after taking some time "to reflect on his campaign and consider who would be the best Democratic candidate to carry the torch of fighting monopoly power and beat David Young in November." Cindy Axne, Pete D'Alessandro, Greenfield, Paul Knupp, and Eddie Mauro are the other declared candidates.

According to the primary candidate list on the Iowa Secretary of State's website, Axne qualified for the ballot on March 9 and Greenfield on March 14. However, Greenfield told Noble today,

“Last night, I received information that a number of the signatures on my petitions probably aren’t valid,” Greenfield said. “I have taken corrective action and I understand I can go down and withdraw my petition and refile because I cannot allow a petition to go forward if there are invalid signatures.”

Iowa Secretary of State’s Office spokesman Kevin Hall confirmed Friday that Greenfield’s petition was accepted, and that she has qualified for the ballot based on the information currently available to the office.

As a result, her campaign staffers are now flooding the 3rd District seeking at least 1,790 valid signatures – all of which must be submitted to the Secretary of State by 5 p.m. Friday. At least some of those staffers are currently patrolling the downtown Des Moines skywalk on the hunt for signatures.

It's not clear whether some signatures on Greenfield's petitions were forged or whether there is some other problem, such as having signatures from people who do not live in the district, including signatures from different counties on the same page, or listing the general election date (rather than the primary) at the top of some pages.

There's no excuse for any serious problem with Greenfield's petitions. She has professional campaign staff, raised more than $330,000 during 2017, and has lots of institutional support, including some labor union endorsements.

Pat Rynard saw Greenfield volunteers and campaign managers for gubernatorial candidates Nate Boulton, Fred Hubbell, and John Norris coming in with signed petitions for Greenfield late this afternoon. A few minutes before the deadline, they were still checking to make sure they had enough signatures from various counties.

UPDATE: Greenfield told Iowa Starting Line "her campaign manager informed her last night that he had forged some signatures on her petition filing." She fired him, obviously. I've never heard of professional campaign staff doing that. I had assumed some inept volunteers or unscrupulous hired operatives caused the problem.

Pete D'Alessandro tweeted on March 16 that he had qualified for the ballot, though at this writing his name does not appear on the candidate list.

I haven't seen whether Eddie Mauro or Paul Knupp submitted their nominating papers this week. UPDATE: Mauro did submit papers. Knupp announced late this afternoon, "I am now and going forward, a proud Green Party candidate for Iowa's third district congressional seat." Either he was unable to collect enough signatures to qualify as a Democrat, or he never seriously intended to compete for the nomination. It's poor form to take up so much time at Democratic forums for months and then run on the Green ticket. SECOND UPDATE: As of 6:20 pm on March 16, Mauro's name appears on the candidate list, but not Greenfield's.

If the Democratic field shrinks to three or at most four candidates (with Greenfield), there's a good chance someone will win the nomination outright with at least 35 percent of the vote in the June 5 primary. I will update this post as needed.

Axne would probably benefit the most if Greenfield fails to qualify for the ballot, not only because she is the only other woman in the field, but also because she and Greenfield have a similar message about being able to relate to the struggles of ordinary IA-03 residents.

LATER UPDATE: Jim Mowrer, one of the Democratic candidates for secretary of state, released this statement on the evening of March 16.

DES MOINES, Iowa – Jim Mowrer has called on the Iowa Secretary of State’s Office to launch an investigation into the state’s current ballot access process following reports that they failed to catch hundreds of falsified signatures in a recent filing:

“Iowans deserve integrity and transparency when it comes to our elections, that includes the process candidates go through to file petition signatures to put get their name on the ballot. Earlier today, Theresa Greenfield did the right thing by pulling her nominating petitions as soon as she became aware of this situation and it has been inspiring to see so many activists and volunteers come together to recollect signatures for her campaign today.

“However, this incident shows the Secretary of State’s office failed to catch hundreds of falsified signatures. Paul Pate should immediately launch an investigation into this incident and work with state election officials, county auditors, and the legislature to provide recommendations for increasing the integrity of this process. He should also begin discussions with the Iowa Attorney General’s Office and the Department of Criminal Investigation regarding a criminal investigation of the staffer who admitted to submitting falsified petitions.”

“Money remains the largest barrier to participating in our democracy,” says former economist for the U.S. Department of the Treasury.

Winterset -- Austin Frerick announced that he would end his campaign for the Democratic nomination in Iowa's Third Congressional District effective immediately.

“Thank you to all of our supporters here in the Third District, across Iowa, and around the country. I couldn’t be prouder of all that our campaign has accomplished. We built the largest social media following of any candidate in this race, we exposed the corrupt and conflicted dealings of the Iowa Farm Bureau, we took our message to national publications like The New York Times, The Intercept, The Washington Monthly, Civil Eats, SlowFoodsUSA, The Nation, and numerous small town Iowa papers like the Creston News Advertiser, Guthrie Times, and Earlham Advocate, and, most importantly, we helped build a grassroots movement to fight the economic concentration and monopoly power that is wreaking havoc on communities in Iowa and across the country," Frerick said.

“However, in spite of those achievements, we could not raise what I believed to be the necessary funding to continue in this race,” Frerick said. “In 2018, money remains the largest barrier to participating in our democracy, not just at the campaign level, but also for the single mom who can’t get off work to go caucus for the candidate who she believes would best represent her.”

“We are rapidly moving towards a culture and an economy that does not acknowledge the dignity of working people,” Frerick continued. “In rural and working America, people are just getting by and the public spaces and glue of civic life are falling apart,” he continued. “The professional class is so far removed from the day-to-day lives of working people that they remain oblivious to the hollowing out of the country right in front of their eyes.”

Frerick came to national attention for his call to block a proposed merger between Monsanto and Bayer, and his argument that companies such as Amazon, Facebook, Tysons, and Nestle represent a danger to our economy and politics due to their dominant market share.

Frerick also brought a national spotlight on the Iowa Farm Bureau and how the organization's significant investments in large agribusiness, oil, and chemical companies puts them in conflict with the interests of the farmers that it claims to represent. "The Iowa Farm Bureau," Frerick continued, " is more concerned with it's executives' dividends than the well-being of family farms."

Frerick announced he would take the next few days to reflect on his campaign and consider who would be the best Democratic candidate to carry the torch of fighting monopoly power and beat David Young in November.

MARCH 17 UPDATE: The Greenfield campaign sent out an e-mail blast with the subject heading "Team Democracy."

Yesterday was one of the wildest days in Iowa politics I have ever experienced. And I couldn't be prouder of my fellow Iowa Democrats.

I don't really know how to tell this story, except to just tell it. So, here goes:

On Wednesday morning, I filed my petition to appear on the ballot for the 3rd district. We'd been working for months on getting those signatures. The deadline wasn't until Friday, and I felt good about getting it done early.

On Thursday evening, my campaign manager informed me that he'd forged some of the petition signatures.

This was a profound violation of my trust, as well as the trust of all of the volunteers and activists who've poured their hearts into this campaign.

And then, after a deep breath, I knew exactly what I had to do: I was not going to get on the ballot with forged signatures. No way. No how.

To look the other way would have been wrong. This campaign is based on hard work, common sense and never giving up. And always doing the right thing.

I fired my campaign manager on the spot and stayed up most of the night making a plan for Friday. We were going to start over and collect all 1,790 signatures – in one day.

Word started to spread. Volunteers started to show up. One after another, they hit the streets. Hair salons, bowling alleys, grocery stores, shopping malls, and street corners – all across the 3rd district.

Then – and this is amazing – the staff and volunteers for other campaigns started to pitch in. For months, all the Democrats running for Governor have been battling it out against each other. But they all set that aside for a day and pitched in to collect signatures for me. Even Pete D'Alessandro, one of my opponents, pitched in to help.

I started calling 'em "Team Democracy" – a band of everyday Iowa superheroes who came to save the day.

The deadline was 5 p.m. to get 1,790 good signatures to the Iowa Secretary of State. Volunteers were pouring in with sheets of signatures. Like a scene from a movie, I made it to the state capitol at 4:53 p.m. I signed the paperwork at 4:59 p.m. and it was stamped in on time at 5 p.m. on the dot.

The last hour was such a whirlwind, we didn't get a final count of the signatures. We'll find out soon whether we made it or not. But no matter what happens, I want everyone to know how thankful I am for the outpouring of support.

I'm so grateful to AFSCME, the Laborers, IBEW, the Building Trades, Boilermakers, members of the Iowa Federation of Labor, ISEA members – all of our union brothers and sisters, party activists, campaign staffers, family and friends.

Hundreds of Iowans set aside everything ­– their chores, their errands, their own agendas.

We showed the world what we've always known – when the chips are down, when there's a crisis, when our neighbors need a helping hand, Iowans step up. We jump right in and get to work.

No matter what happens, I know this: We did the right thing. And I couldn't be more proud of – or more grateful for – all of you who pitched in to help.