How you can fight Trump's cruel treatment of immigrant children

By now, you've probably heard that the United States government is ripping children away from their families at the border. As expected, the gut-wrenching truth generated significant public outcry. The Department of Justice's "zero tolerance" policy on immigration has separated almost 2,000 children from their parents. That is 46 children a day for six weeks straight.

At issue here is not immigration policy, but our basic decency as a country. The politicians in charge of our country think it is in their best interest to stop desperate and downtrodden immigrants at the border, snatch up their children, and then send parents back to the place they were so desperate to flee.

America faces a choice. No longer can the United States claim to be the land of liberty while also committing one of the cruelest acts imaginable. We are at a crossroads: we will either be a nation of compassion or a country of cruelty. There is no longer room in the middle.

It's our decision. But calling our elected officials once, leaving a message with a staffer, and calling it a day is not going to cut it this time. We must confront the sad truth that corporate donors and wealthy corporations have more power in Washington than the people. While this is a betrayal of our most basic values, it also presents a rather unique opportunity to hit our political leaders where it hurts them the most: their campaign coffers.

The zero-tolerance policy is so cruel and so inhuman that any corporation caught on record supporting it would face mass outcry. But to avoid offending their donors, they're better off remaining on the sidelines, quietly supported the representatives aligned with their interest while not offending consumers.

Our objective is simple: break their silence. And believe it or not, Iowans have the best shot at doing it.

Senator Chuck Grassley chairs the Senate Judiciary Committee. That role gives him immense power to delay judicial nominees, investigate the Justice Department, and advance legislation related to federal law enforcement and border control. If he won't respond to his constituents, he will certainly respond to his donors. So, let's follow the money.

Here you will find a table showing Grassley's top 20 campaign donors from the 2016 election, gathered by the Center for Responsive Politics. Next to the company's name is their media representative or corporate address. 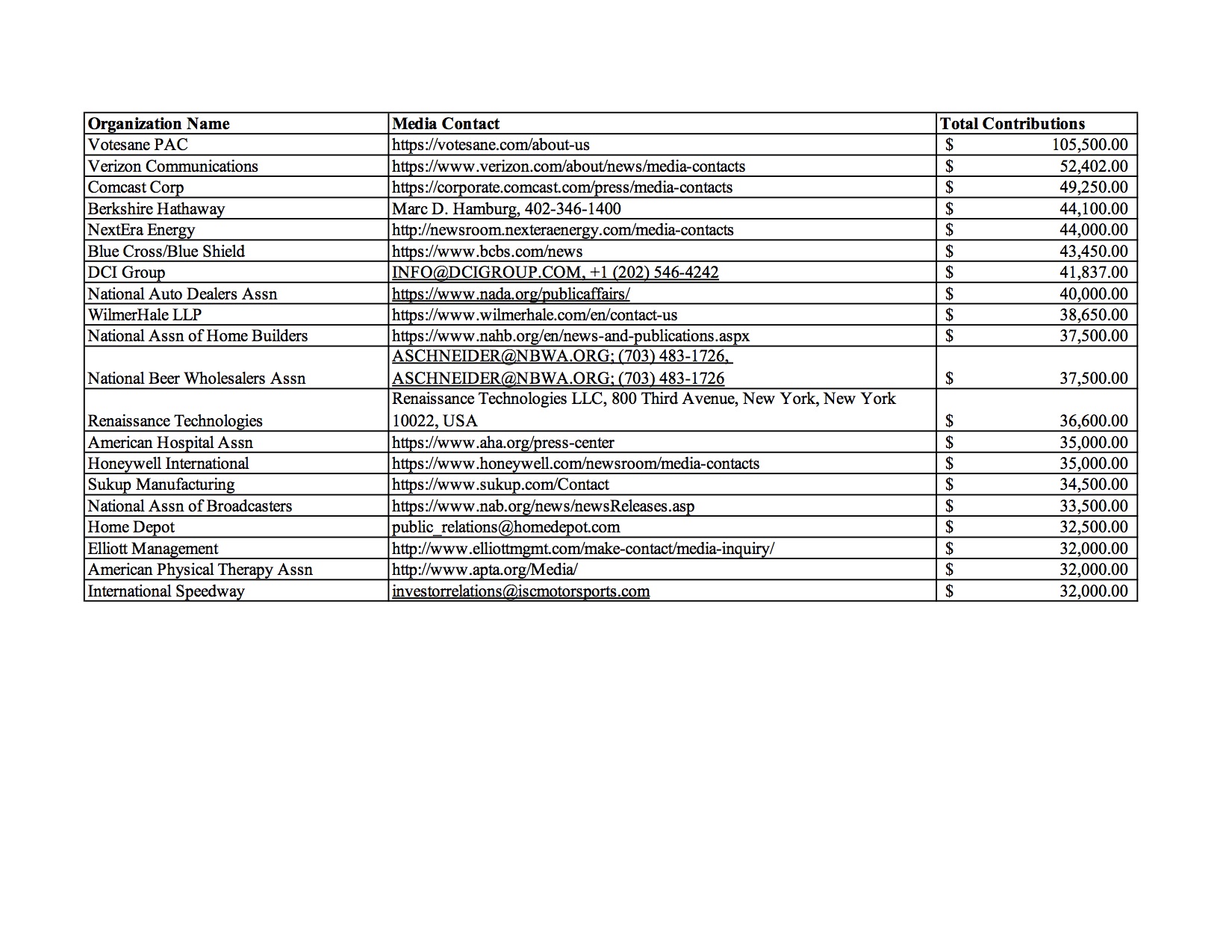 What we have to do is simple:

1. Contact them over all platforms. Emails, phone calls, social media, and any other mode of communication where they are present.

2. Ask them to release a statement opposing separation of families at the border and requesting the representatives that they gave money to, including Grassley, to act.

In order for this to work, their response has to be recorded. If they agree to release a statement, ask them when they might choose to release it. If they refuse to condemn the forced separation of families, ask the following question:

"Do you refuse to issue a public statement condemning the zero-tolerance policy, which has separated 2,000 kids from their parents at America's southern border?"

Their silence won't be broken easily. Their public relations team will try to dodge your questions, probably claiming that you need to be a media representative to contact them. Either that or they'll refer you to someone else in the corporate bureaucracy, attempting to get you lost in a maze of confusing and redundant titles until you eventually stop calling.

If they try these diversionary tactics, calmly ask the following:

"Your company donated money to the public officials in charge of overseeing and enforcing this rule. Will you release a statement urging the elected officials you supported to take steps to stop this practice?"

If they say no, then they've put company profits and political connections ahead of basic human decency. Clearly, this speaks volumes about their corporate values and damaging their reputations. That silence can serve as the basis for boycotts, protests, and other actions designed to hold corporations accountable for their political activities. If they refuse to condemn the horror of the zero-tolerance policy, they become complicit in its existence.

We know that at the end of the day, corporations will put their bottom line first. If they start to sense the public outrage, they'll know it is in their best interest to oppose the policy. This, in turn, puts pressure on Republican legislators to act. If they don't, they risk losing donors in November.

We live in a world dominated by corporate interests. This is without a doubt a betrayal of our basic values as a country and we must continue the fight to put people back into politics. But in these tumultuous time, we need to use every tool we can to defend America's values and construct a country we can once again take pride in. It is time to democratize corporations, defend our values, and end the disgusting and wicked Department of Justice policy.