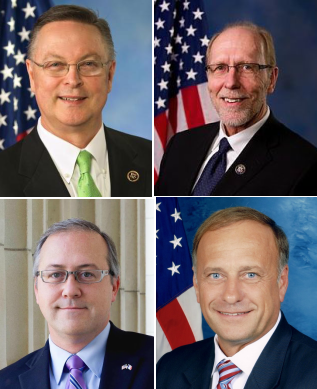 U.S. House members rejected by 231 votes to 193 one of two immigration bills leaders had planned to bring to the floor on June 21. Judiciary Committee Chair Robert Goodlatte's legislation "had not been expected to pass, but conservatives had sought a vote on it anyway," Thomas Kaplan and Nicholas Fandos reported for the New York Times.

The Goodlatte bill would have sharply reduced legal immigration while beefing up border security, cracking down on so-called sanctuary cities and requiring employers to use a system called E-Verify to confirm that they are hiring legal workers. It would have offered a three-year renewable legal status to DACA recipients.

The Securing America’s Future Act would cut entire categories of visas that have long been provided each year to help families reunite with their loved ones, devastating the nation’s immigration system. These visas allow U.S. citizens to sponsor their parents, adult children, and siblings for green cards and permit lawful permanent residents to sponsor their unmarried adult children for the same. Under the bill, even approved petitions filed for people who have been waiting in line patiently for years would suddenly be deemed void. The Goodlatte bill also would end the diversity visa program, which currently provides just 50,000 visas each year for nationals of countries that otherwise contribute few immigrants to the United States. This program has been an important source of visas for African immigrants in recent years. Altogether, these changes—as David Bier and Stuart Anderson have calculated—would reduce future legal immigration by nearly 40 percent. [...]

Under long-standing immigration law, being in the country without status is a civil—not criminal—violation. The Goodlatte bill would change the law and make unlawful presence a crime, turning the 11 million undocumented immigrants in the country today into criminals overnight. [...]

[F]or those DACA recipients who do qualify to receive the paltry nonimmigrant status the bill offers, the protection is far from secure. According to the terms of the legislation, if their income falls below 125 percent of the federal poverty level, they may be stripped of their nonimmigrant status. And by losing their status and becoming unlawfully present in the United States, they would quickly become subject to criminal prosecution and deportation. In short, the bill criminalizes poverty and misfortune for the very Dreamers that the bill’s proponents may claim will be protected. [...]

Instead of recognizing the unique vulnerability of people fleeing violence and persecution, the bill would make it far more likely that asylum seekers and unaccompanied children will be quickly deported back to their countries of origin, potentially being returned to harm or even death.

Representatives Rod Blum (IA-01) and David Young (IA-03) were among the 193 Republicans supporting the bill. Every Democrat present, including Representative Dave Loebsack (IA-02), voted against it, joined by 41 Republicans. Lindsey McPherson reported for Roll Call,

The vast majority of the 41 Republicans who voted against the Goodlatte bill are more moderate members, many of whom face tough re-election races in November. A handful of the "no" votes came from immigration hardliners who oppose all the bills the House has been debating to provide legal status to young undocumented immigrants brought to the U.S. as children, known as Dreamers.

You guessed it: Representative Steve King (IA-04) was in that smaller group. Although the bill authorizes (without appropriating) $25 billion for border security, largely intended for the wall King desperately wants, Goodlatte's token, inadequate gesture to DREAMers was a deal-breaker. Iowa's most infamous immigrant-basher posted on Twitter this afternoon, "I am Pro Rule of Law and Anti Amnesty. I will vote for any bill with a scintilla of enforcement provided it contains NOT a scintilla of Amnesty."

I haven't seen any public statements from Blum, Young, or Loebsack about today's immigration vote but will update this post as needed.

House leaders had intended to bring up a so-called "compromise" immigration bill on June 21, but they delayed the vote for lack of support, first until the following day and then until sometime next week. Conservatives in the GOP caucus appear dead-set against that legislation, and Democrats are firmly opposed as well.