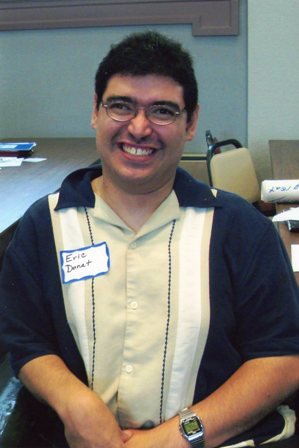 The "dignity of work" and one's worth

Eric Donat is a Democratic activist, volunteer, and disability advocate from Waterloo. -promoted by desmoinesdem

I once worked at Goodwill of Northeast Iowa. I was paid $0.06 (6 cents) per hour minus meals. For one week of working there I was paid $3.24 - and went out and purchased an ice cream cone.

Prisoners are paid 25 to 50 cents per hour for their work and duties inside prison. Therefore, they are "worth more" and are "more valuable" than me while I was being paid 6 cents per hour when I worked at Goodwill.

For Republicans who go on about the "dignity of work": for me, there was no dignity in "working"- in the back room sorting ţhings, while being bullied, emotionally abused, and shamed.

A week later, Republican State Representative Willard Jenkins picked me up as his non-paid volunteer, after I attended one of his legislator's listening posts hosted at the Goodwill of NE Iowa in Waterloo. Even though I wasn't paid as a volunteer, I was--and am--given more dignity just by existing in and associating with the state legislative world and everyone in it, than whatever Goodwill and 6 cents per hour could ever give.

So Republicans could learn a lot about dignity and "the dignity of work." The answer is ... it depends, and not always on money or the balance of your bank account. Dignity depends more on how one is treated and whether one is made to feel that they "have worth," as a person.

Volunteering with legislators and sitting on the commissions and committees on which I serve has given me worth and dignity and has meant I have "contributed to society" in ways that simply working at Goodwill for 6 cents per hour would have never afforded me the opportunity to do.

EDITOR'S NOTE: Eric Donat delivered the following testimony to a public hearing of the Iowa House and Senate Human Resources Committees in December 2013.

• Explain your position (support or oppose): Sheltered Workshops aren’t as positive/wonderful as their supporters or organizations who run them claim.

• What are you asking for? – Tell your story: explain how a bill would hurt or help you:

These sheltered workshops pay people with disabilities who work in them less than the minimum wage of $7.25 and perennial “training wages” less than $5.00 per week.

My story: When I moved back to Waterloo/ Cedar Falls area in 2000 – VR placed me in the sheltered workshop run by Goodwill Industries of NE Iowa in Waterloo.

I worked there for only one week (I was paid 6-8¢/ hr.- which for me added up to $3.24 for my week of work. They had me in their sorting room (set up and run like a factory) sorting [in order to measure how fast/ accurately I did piecework - (The training program supervisor claimed that how fast or accurately I did piecework sorting would determine how much I was paid and whether I got help from Goodwill in obtaining a “regular job” in the community). During my time at Goodwill the training program supervisor also treated me badly without any dignity) –

This experience helped instill in me the belief that work or having a job was not positive or did not provide me with dignity. The fact that I was paid 6-8¢/ hr. (added up to $3.24/ week) told me it was better to live off my SSI payments and do volunteer jobs to the level of my abilities and be treated much better.

After Goodwill - I found a volunteer position at our local ILC.

Former Rep. Willard Jenkins also “discovered” me at Goodwill, because I attended an event he held there. He asked me to volunteer for him because “I was too smart to work there.” It is because of Rep. Jenkins that I advocate and work with legislators to this day. My advocating makes me feel as if I’m doing something commiserate to my abilities that is a contribution to society...And I have dignity instead of being shut away and forgotten.

1. Require that sheltered workshops/ work activity centers pay minimum wage or a living wage for disabled workers who have permanent placement there.

2. “Training wages” start at $5.15/ hour until a disabled worker moves to permanent placement (after one year of employment) when he/she receives at least minimum wage.
(how fast/ or accurate disabled workers do piecework sorting should not determine how much individuals are paid.)

4. Since disabled workers would earn at least $5.15/ hr. Part of ongoing community supported living training would include the basics of financial literacy (ie, Dealing with money, writing checks/ balancing a checkbook, paying bills, having checking/ saving accounts - etc.) – If the disabled person has a payee or other ‘financial overseer’ then that person would work with the disabled individual hand-in hand or explain things to an sufficient level of understanding.

5. Change the relationship between organizations/ companies who have contracts for piecework sorting of sheltered workshops in order to enable the sheltered workshop to pay more than $3-5/ hr. (pay is at level because of these contracts – Workshops fear loss of contracts if they pay more.)

6. Change Social Security Administration rules / SSI & SSDI payments/ Medicaid rules to make working/ having a job actually worth it (And, it worth trying to get off SSI)

Where – I can say having a job that pays - is worth it more - than living on SSI, and volunteering for legislators who give me dignity - instead of me being shut away and forgotten - Is worth my time and effort to change and try something else...

But, at this time my experience at Goodwill and the 6-8¢/ hr and $3.24 per week instills in me the exact opposite.