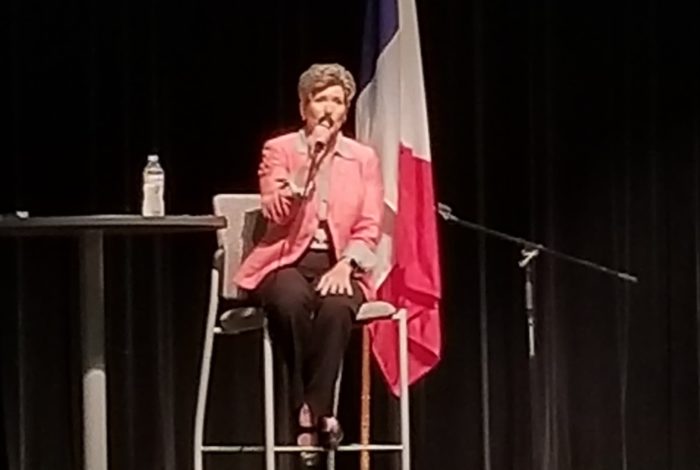 First-person accounts of political events are always fun to read. Thanks to Susie Olesen, a semi-retired former teacher and school administrator in southwest Iowa, for this write-up. -promoted by desmoinesdem

Senator Joni Ernst's July 6 town hall at the high school auditorium in Shenandoah (Page County) was a well-attended, civil meeting. People who wanted to participate filled out a slip of paper, which were drawn out of a glass jar to determine who would be able to ask questions. Ernst sat at a table in front of the room.

A farmer asked the senator about the tariffs on soybeans and other crops. The farmer said he can't pay the bills if he can't get fair prices for his commodities, and he expects good trade policy. He was polite but very frustrated over President Donald Trump's abandonment of longstanding trade agreements.

Ernst responded that she has discussed trade policy with the president and his trade experts, and they have responded that they are working on deals. She mentioned numerous times she had a call scheduled right after the meeting with Robert Lighthizer who is President Trump’s trade representative. She said she goes to the White House regularly to discuss the current trade policy and has told the president he needs to get the deals done. She suggested if Canada didn't cooperate in the NAFTA negotiations, the administration should go ahead and make a bilateral agreement with Mexico, suggesting that would force Canada to come around.

When asked specifically about dropping out of the Trans-Pacific Partnership, Ernst responded that Hillary Clinton didn't support that agreement either, and had she been elected president, we'd be in the same position we are in currently. Ernst also said trade impacts defense, and the president should consider that. She talked at length about the tariffs and how dissatisfied she is, but she didn't have any solutions. She kept reiterating that the president should "finish the deals." She also noted that she had met with a roundtable of farmers earlier in the week, and there is real concern among farmers.

Ernst spoke extensively of China and their dirty dealings. She said they routinely break the rules and are untrustworthy and unreliable, and the U.S. has to make sure they stick by the deals we make with them. [Editor's note: Secretary of Agriculture Sonny Perdue has pushed similar talking points lately.]

Audience members asked Ernst about Medicare, Social Security, and VA Benefits. A Vietnam-era vet said he experienced a bad year financially a few years back and received free health care through the VA, but when his income went up, the benefits weren't as generous. The veteran said in exchange for military service, vets should all receive VA benefits. She disagreed and suggested the program would not be sustainable if all vets received full health care. As a result, they prioritize who receives full benefits through needs testing and combat experience. She said those with purple hearts and other awards for valor received priority.

Another citizen said she has twice paid thousands of dollars for hearing aids and they increase her quality of life. She thought hearing aids, eye exams and glasses, and dental care should be available through Medicare. While Ernst didn't disagree with the specific comments, she said something will have to be done so none of these important programs run out of money and cannot be sustained. She said running them is expensive and mentioned possible needs testing, delayed retirements, and convincing young people they’re important.

One question was related to a crisis with a pension plan called the Central States. This will run out of funds by 2025, but is insured through the federal government. The pensioners’ benefits will be cut in half if nothing is done and the plan transitions to the federal insurance. Ernst said Congress has requested an audit of the organization to determine what exactly has happened but offered no timeline for that audit. She also made no promises about fixing the pension plan and restoring the original benefit expectations.

She was also asked about a veterans' program in Shenandoah that has been expecting some sort of federal funding for some time but has not yet received it. I wasn't clear about what it is and couldn't find it online. She said the new VA Director would have to be confirmed first, and she wasn't sure when that would happen. She said she would "look into it." She did note that is one of many across the United States and there were many needs and not many resources.

She said the Congress is aware changes will have to be made to all of these programs if they are to sustain (Medicare, Social Security, VA benefits, pension plans, etc.), but she said she is one of the few people in Congress willing to discuss them and consider changes. She said keeping them as they are would be an expensive ordeal, and getting people to accept changes would be difficult. She said the government doesn't have the money to cover everything.

I thought it a rather disingenuous comment given the Congress cut taxes by over $1 trillion in December of 2017, and those cuts primarily benefit the wealthiest Americans, certainly not those dependent on these programs for a reasonable quality of life. In case you've forgotten, Ernst voted for the cut.

Ernst was also asked about immigrants who had enlisted in the armed services with the promise that their service would result in citizenship. The previous day, the Associated Press reported that those immigrants were being discharged and the promise of citizenship being revoked. She said she had no prior knowledge of that policy as a member of the Armed Services Committee and would be looking into it. She said the government should follow through with the promise.

Someone asked if Ernst would support the McConnell Rule of not providing a hearing for a Trump nominee to the Supreme Court, since it's less than a year prior to the next election. She quickly corrected the questioner and announced that the rule was not the "McConnell Rule," but the "Biden Rule," and it only applied to Presidential elections. She repeated the words "Biden Rule" about four times. Seemed fairly clear what the Republican strategy is regarding this issue, which is to deflect blame and accept no responsibility.

Republicans cited a 1992 speech by then-senator Joe Biden, arguing that if a Supreme Court seat became vacant during the summer, President [George H.W.] Bush should wait until after the election to appoint a replacement, or else appoint a moderate acceptable to the then-Democratic Senate. Little-noticed at the time, Republicans began to refer to this idea as the "Biden rule". Biden responded that his position was, and remained, that the President and Congress should "work together to overcome partisan differences" regarding judicial nominations.

I believe rules are discussed and established through some formal process - this thing Ernst is calling the "Biden Rule" was just a speech by Joe Biden, and the vacancy never materialized. On the other hand, McConnell did obstruct the nomination process, but he and Grassley and the rest of the Republicans aren't taking any responsibility for that – just not telling the truth and saying it is the “Biden Rule.”

A woman told Ernst she was horrified by the disrespectful language coming out of the Trump administration and wondered why the Republicans didn't call him on it. She highlighted Trump's criticism on Thursday in Montana of the elder President Bush's volunteer program, 1000 Points of Light.

Ernst replied that bad language is a bipartisan issue and that Sarah Huckabee Sanders shouldn't have been kicked out of the Virginia restaurant and that Environmental Protection Agency Administrator Scott Pruitt should have been able to eat his lunch in peace, rather than be interrupted by the teacher and her child asking him to resign. She told the story of a young Democratic intern yelling "F___ You" at the president. Ernst was indignant that the intern had been given a two-week leave rather than fired. She exclaimed that she would certainly have fired the intern. She was riled up about all the bad language of Democrats.

The senator did say she didn't like it when Trump was critical and demeaned people about whom he was speaking. She was asked by a constituent in the audience if she would support a censure of the president for his language, since she was bothered by it. She said she would "look into it," and she noted, honestly I might add, that even if she did offer a censure resolution, it would have to be approved by the Republican leadership and that wouldn't happen.

The glass jar with the questions was large, and Ernst answered only a few. She repeated herself frequently and went off on long, boring tangents. I believe that was a tactic to avoid answering a lot of questions. [Editor's note: repetition and filibustering to burn time are consistent features of Ernst's public appearances.]

While I disagree with her politics, I commend her for having town halls. Representative David Young (IA-03) doesn't bother with them anymore. He won't meet with groups - only meets with individuals for about ten minutes at a time. Everyone at this meeting was very polite, so I'm not sure what Young is so afraid of. While there were a few groans, that’s to be expected. Democracy is enhanced when both sides share their views and try to listen to each other. I can say the crowd listened today, and I hope Ernst did as well.

Thanks to Jackie Steiber Cordon, Jan McCoppin Norris, Barb Nelson, and Pat Shipley. None of us took notes, but our lunch conversation and their comments on my Facebook page helped me put this together.

UPDATE: Someone who attended the town hall posted this YouTube video showing the Q & A about censuring the president:

Here's the exchange about trade and agriculture:

Susie Olesen is a former teacher and school administrator who lives in Greenfield and is committed to making the world better for our children and grandchildren. She works part-time for Des Moines-based Iowa School Finance Information Services.