I jotted down some quick thoughts on the press conference between President Donald Trump and Russian Dictator President Vladimir Putin that has jaws dropping globally.

This flies in the face of evidence from the CIA, the Senate Intelligence Committee, and Trump's own Justice Department who just moments ago announced the arrest of a Russian national for "infiltrating organizations having influence in American politics, for the purpose of advancing the interests of the Russian Federation."

What do Iowa's politicos have to say about this?

Will Senators Chuck Grassley and Joni Ernst take Trump to task for siding with a thief and murderer over his own people? Will Representatives Rod Blum and David Young? Does anyone still care what Steve King thinks?

"It should always be the goal of U.S. presidents to improve relations with other countries... it is also important for our leaders to be clear-eyed in their approach. Vladimir Putin isn’t a friend to the United States, to the Western world or our values."Sen. Chuck Grassley (R-IA)

Sen. Ernst didn't even bother to mention the President in her Twitter post, but her press release included an additional paragraph:

"I have the utmost faith in the U.S. intelligence community and their assessment that Russia interfered in the 2016 election. Russia has never been a friend to the U.S., and they continue to pose a threat to America and our allies."

“We need to be cautious in how we approach our dealings with Russia. I hope that President Trump, today, delivered a strong message behind closed doors that Russia will continue to be punished for their illegal annexation of Ukraine in 2014, their abhorrent support for the murderous Bashar al-Assad regime in Syria and their aggressive actions in U.S. domestic policy. I am also hopeful President Trump discussed Russia’s role in the Balkans, as Iowa’s sister state, Kosovo, continues to be threatened by Russia’s hybrid warfare tactics in Serbia.”Sen. Joni Ernst (R-IA)

Hope dies last if Ernst thinks there is any chance Trump "delivered a strong message behind closed doors" right before he gave Putin everything he wanted while the world was watching.

David Young has the strongest statement from the Republicans in our delegation so far (emphasis mine):

"There is no doubt Russia interfered in our election, this has been confirmed by our intelligence community and Congressional committees. While we don’t know what was said in the closed door meeting, in the public setting the President missed an important opportunity to pronounce serious displeasure and consequences of this meddling and interference. Russia is not an ally. Russia is our adversary. Iowans and Americans take their elections and value their vote in a dutiful and personal way and the President should have acknowledged this publicly by at least chastising Putin and warning him against acting against the interests and values of the United States and her republic in this way."Rep. David Young (R, IA-03)

Dave Loebsack, the only Democrat representing Iowa in the U.S. House, was blunt:

“President Trump is flat out wrong to blame the United States and take the word of a foreign adversary over the findings of his own intelligence experts and the House Intelligence Committee. Iowans understand that Putin is a tyrant and it is now more critical than ever that both parties in Congress work together to protect our election systems, democratic process and national security interests both at home and abroad.”"Rep. Dave Loebsack (D, IA-02)

I'll update this post if/when I see statements from Blum. Not Steve King though. He's not worth my time. 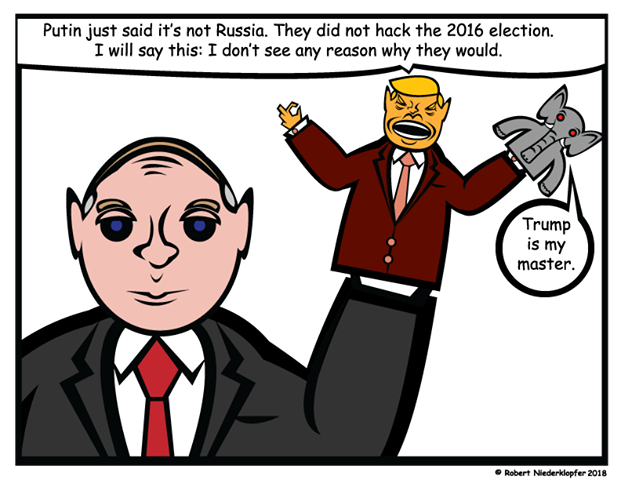