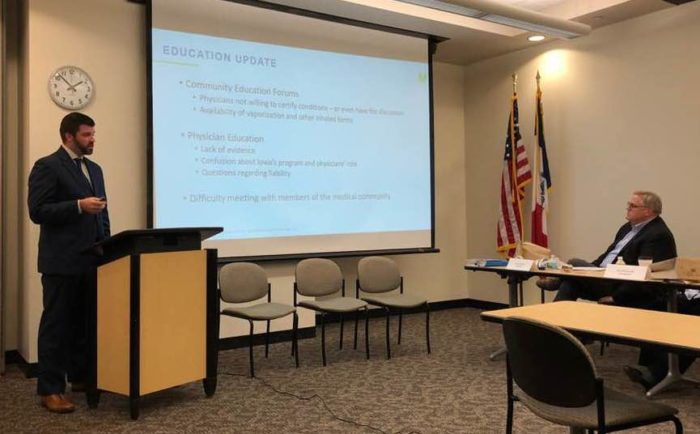 I attended the seventh meeting of the state Medical Cannabidiol Advisory Board on August 3 at the Iowa Laboratory Facility on DMACC's Ankeny Campus. Current law names nine "debilitating medical conditions" which can legally be treated with cannabidiol. See Iowa Code § 124E.2(2) (2018). The board considered three petitions to expand the list. Board members denied one, deferred one, and granted the petition to add ulcerative colitis.

My observations about these rulings may help advocates lobbying officials to allow medical cannabis for other diseases or chronic health conditions now excluded under Iowa law.

Trigeminal neuralgia was denied because the board said it fits under the category of “untreatable pain” already covered by the statute. After that ruling, some expressed concern whether anyone would know that the petition was not rejected on its merits. My understanding is the Iowa Department of Public Health (IDPH) will include that explanation in the advisory board’s written denial of the petition.

To me, this seems like a warning. If you say “pain” in your petition, the advisory board will not add that medical condition, on the grounds it is already covered by the statute (untreatable pain). On the other hand, you may want to file the petition anyway, to make sure the board issues a written denial stating the medical condition is already covered. What a hassle to put sick and suffering people through.

Another thing that stood out: the advisory board members could not understand how the legislature added Crohn’s disease to the list of medical conditions. They could not find adequate support for Crohn’s in the medical literature. [Editor's note: there was no medical basis for decisions key Iowa House Republicans made on the final night of the 2017 legislative session, when they threw together this bill, abandoning a better bill the Iowa Senate had approved with overwhelming bipartisan support.]

So, rather than recommending that Crohn’s disease be removed from the list--which they have the power to do--the advisory board granted the petition for ulcerative colitis, on the grounds that the legislature must have meant inflammatory bowel disease instead of Crohn's. This seems like an odd (political rather than scientific) way of looking at it, but the advisory board is obviously not interested in removing anything the legislature included. If I understand correctly, had the legislature included "inflammatory bowel disease," the advisory board would not recommend adding Crohn’s disease or ulcerative colitis, as those two are covered in a broader category. Whew, this can be confusing.

The board deferred the petition for post-traumatic stress disorder (PTSD) and bipolar disorder, since it lacked any information on bipolar disorder. They considered rejecting the petition because it wasn’t filled out correctly, but determined the board has the authority to recommend adding or removing any medical condition without a petition requesting such action. See Iowa Code § 124E.5(3)(b) (2018).

Obviously, anyone seeking to add bipolar disorder to Iowa's list of qualifying medical conditions needs to submit some evidence supporting treatment with medical cannabis between now and the next advisory board meeting, scheduled for November 2. Board members will likely strike that health condition from the petition if no one fixes the omission. As I recall, the advisory board did ask IDPH to do some research on the disorder, but I’m not sure whether that will happen.

So, it wasn’t exactly the most scientific analysis. It was more like, the legislature has said we are going to move forward, so the advisory board is acting in a way to avoid getting into a fight with the FDA about medical studies. At previous meetings, board members have noted the absence of literature on the utility of cannabis for almost all health conditions, other than those the Institute of Medicine found conclusive evidence to support in 2017.

Another thing I found interesting: Dr. Robert Shreck, the oncologist on the board, said a patient could refuse to take opiates, making that condition “untreatable” with opiates. I hadn't considered that angle before. These explanations should be written down somewhere to help the average person understand what the legal terms mean.

Laura Belin asked me, "Does the board have the final say on whether a disease gets added to the list of debilitating medical conditions for which cannabis extract is allowed? Or can the governor or legislature block their proposed expansion of the list?"

These actions are reviewed by the legislature’s Administrative Rules Review Committee. So far, that committee has not rejected any administrative rules related to Iowa's medical cannabis program.

Dr. Ken Cheyne, a pediatrician on the board, addressed Laura’s question about a possible veto from the executive branch. The advisory board submits its requests for new medical conditions and new forms of delivery to the state Board of Medicine. That board rejected the medical cannabis board's recommendation to allow vaporization as a form of delivery, which Cheyne said was not expected.

He added that it would be wise for advocates who support including ulcerative colitis to attend the Board of Medicine meeting that will consider this recommendation. I would say all of us should be on alert now, for the same reason. The Board of Medicine does not hear the evidence presented at the advisory board meetings, but does have the final say on whether the IDPH adopts policies supported by the advisory board. This seems totally wrong-headed if the goal is to help sick and suffering people. The Board of Medicine should either be the advisory board and hear all the evidence related to various health conditions, or be removed as an obstacle between the IDPH and those charged with making policy on cannabis. See Iowa Code § 124E.5(4) (2018).

Finally, a word of warning to those who would like to add other medical conditions, such as Ehlers-Danlos syndrome. Using pain as the rationale will likely result in a repeat of last Friday's ruling on trigeminal neuralgia. If you say pain is the best way to describe the medical condition, the advisory board will say it’s already covered. But as I mentioned above, it may be helpful to get a written ruling that it’s already covered. I don’t think legislators, administrators, or courts would necessarily reach the same conclusion without some help from this advisory board.

I’ve attended and recorded all seven of the advisory board meetings. You can find the audio recordings on my website at iowamedicalmarijuana.org.