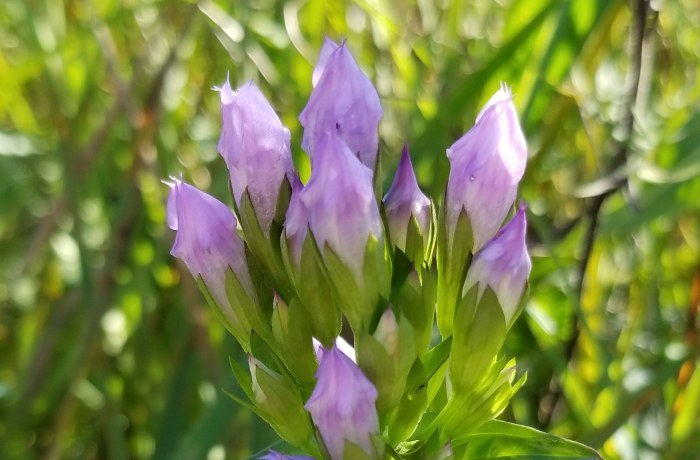 Katie Byerly shares her knowledge and photographs of yet another wildflower I've never seen in the wild. -promoted by desmoinesdem

In his book The Secrets of Wildflowers, Jack Sanders calls Gentians the Royal Family of Wildflowers. Gentians are named after King Gentius, who ruled as the last Illyrian King from 181 to 168 BCE. It is believed that Gentius discoverd medicinal value from the plant and used it as an antidote to poison and in the dressing of wounds.

If we follow the belief that Gentians are the royal family of the wildflowers, I'd like to imagine the handsome King Fringed Gentian ruling his flower kingdom with his beautiful pale Queen Cream Gentian at his side. His brother Prince Bottled Gentian leads the flower army and is known for his strength. And then there is their rigid cousin Duke Stiff Gentian ... he is often overlooked as part of the Gentian family as he quietly rules his northern counties.

I first found this stately wildflower while walking the Rock Falls prairie (Wilkinson Pioneer Park) with my then puppy Prairie Dog. Like most gentian, Stiff Gentian (Gentianella quinquefolia) blooms late in the summer. Many writers describe the pleasant surprise of finding a blooming gentian just when you think the flower season has come to an end. I know I was excited to find a new wildflower that September day. My dog Prairie Dog also appears happy when we find a new flower together. I'm sure she must sense my pleasure, but she sure acts happy too. 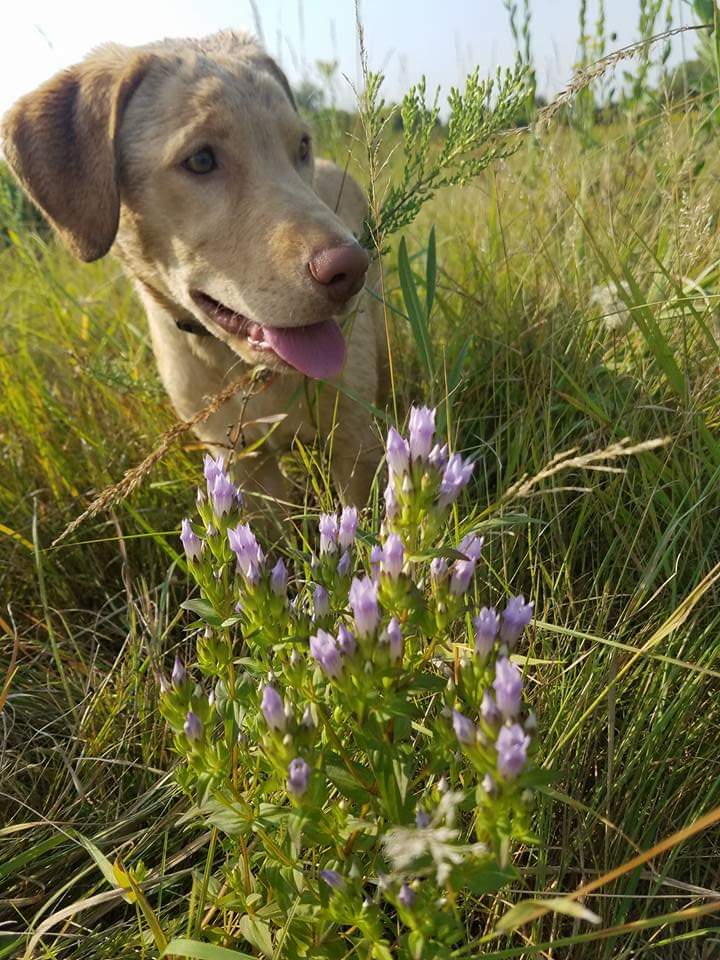 The Virginia Wildflowers website describes the wildflower as "a species that grows to about 2 feet in height. It bears numerous clusters of violet to lilac tubular flowers that open into 5 pointy lobes. The narrow flowers are held strongly upright, hence the name Stiff Gentian."

One would think that these five pointy lobes are why the plant is also called the "five flowered gentian," but Virginia Wildflowers corrects that thought. It is because the clusters of flowers often, but not always, occur in groups of five. 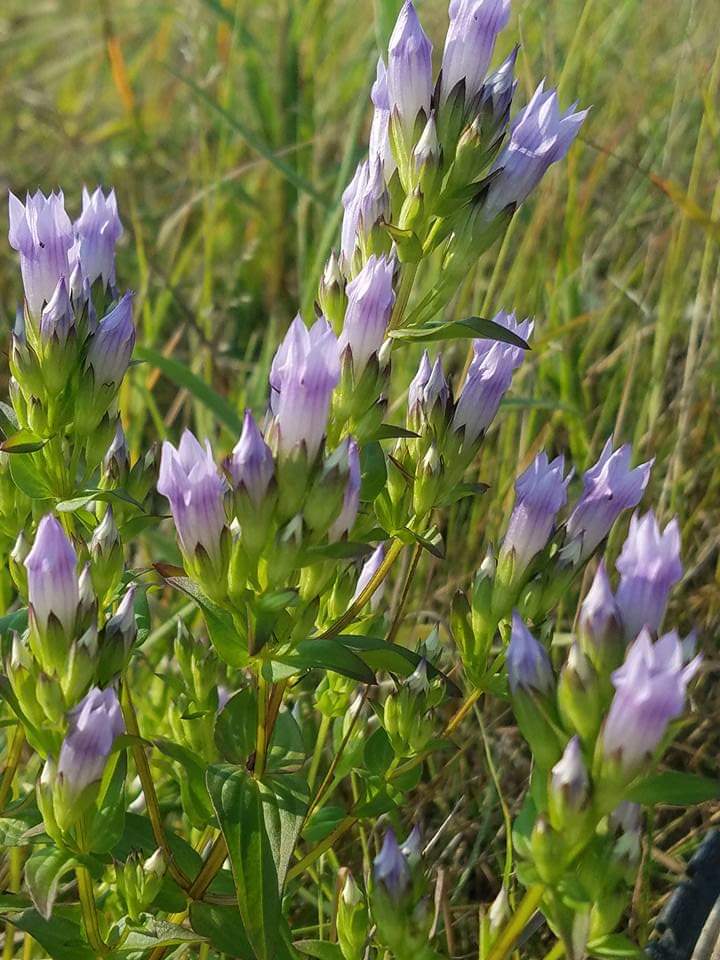 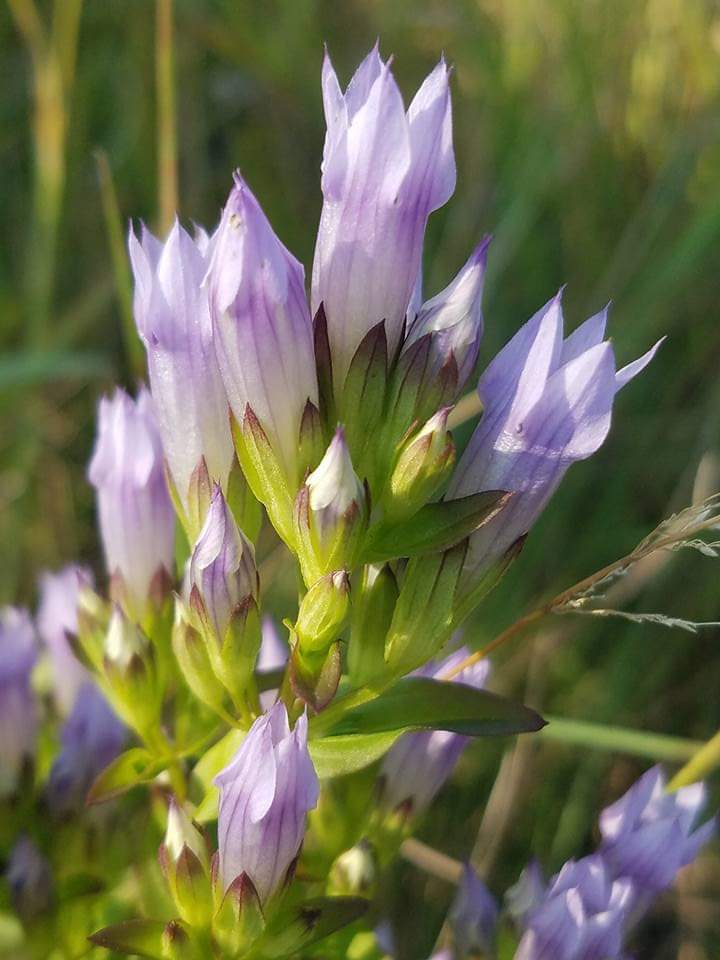 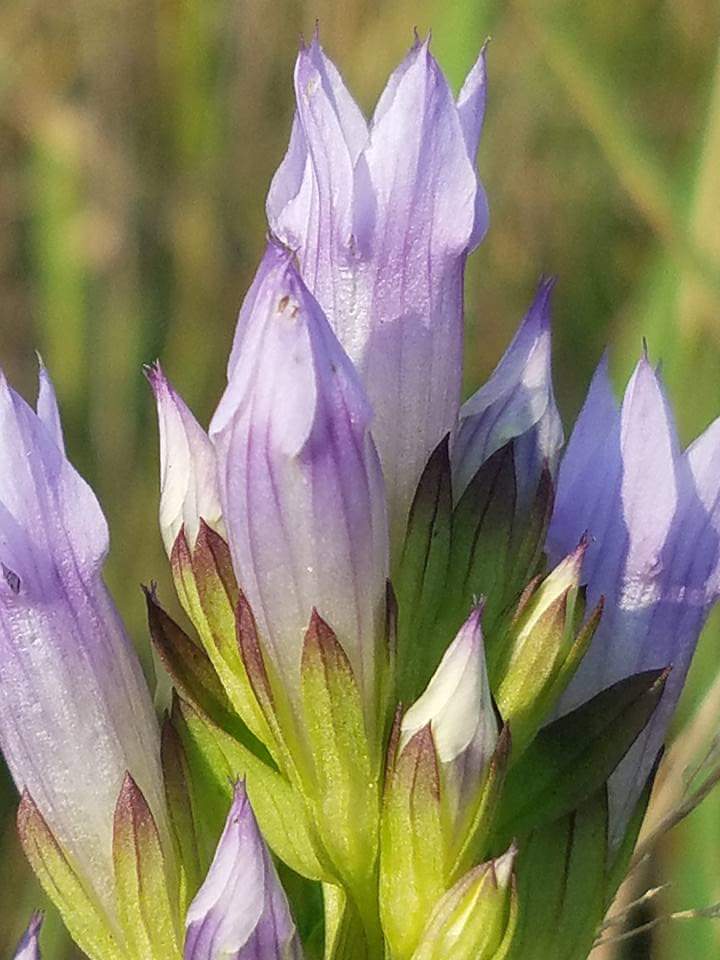 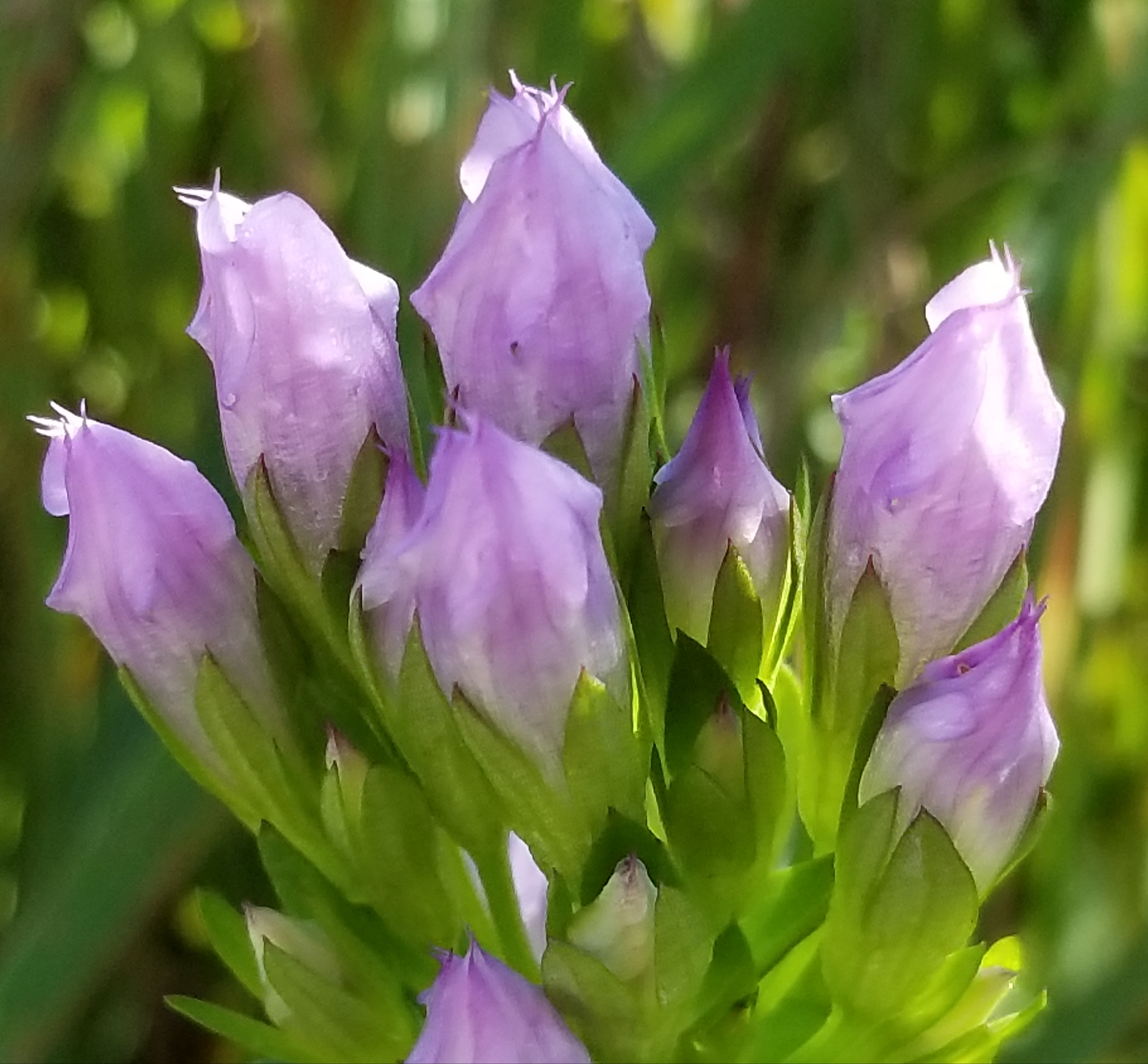 Both the Rock Falls prairie and this triangle prairie are managed by the Cerro Gordo Conservation board. Illinois Wildflowers lists numerous types of habitats for the Stiff Gentian. Some of these habitats are "hill prairies, upland savannas, thinly wooded slopes and rocky meadows to name a few. But most interesting to me is that this species is usually found in high quality natural habitats, often where limestone is close to the ground surface. Perhaps this explains the success of Stiff Gentian in Cerro Gordo County - known for its brick and tile businesses.

This September, Prairie Dog and I found one lonely Stiff Gentian growing in our limestone prairie. It is the first gentian of any type I have found on our land. We (yes, my dog and I) were pretty tickled to find it. 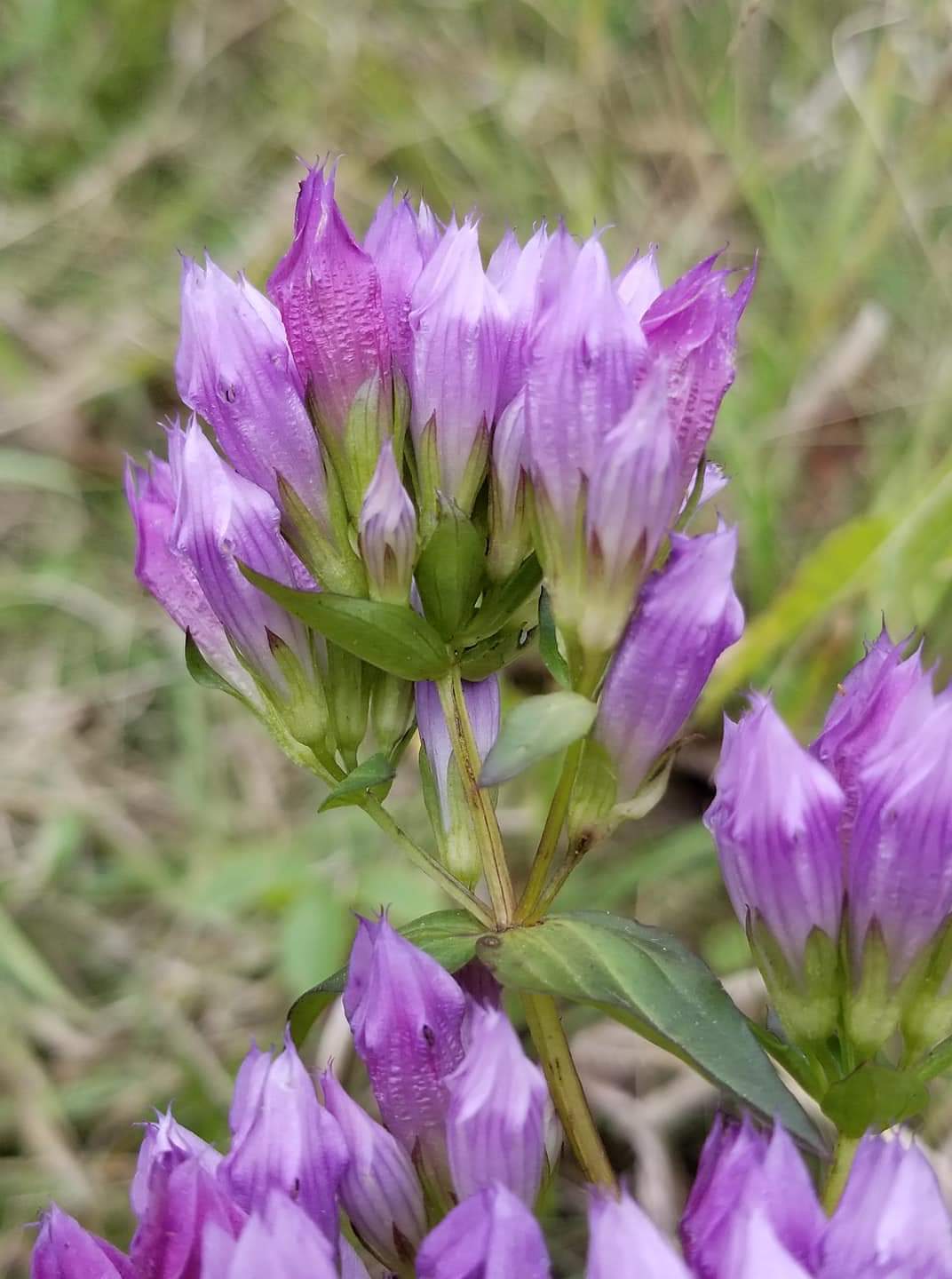 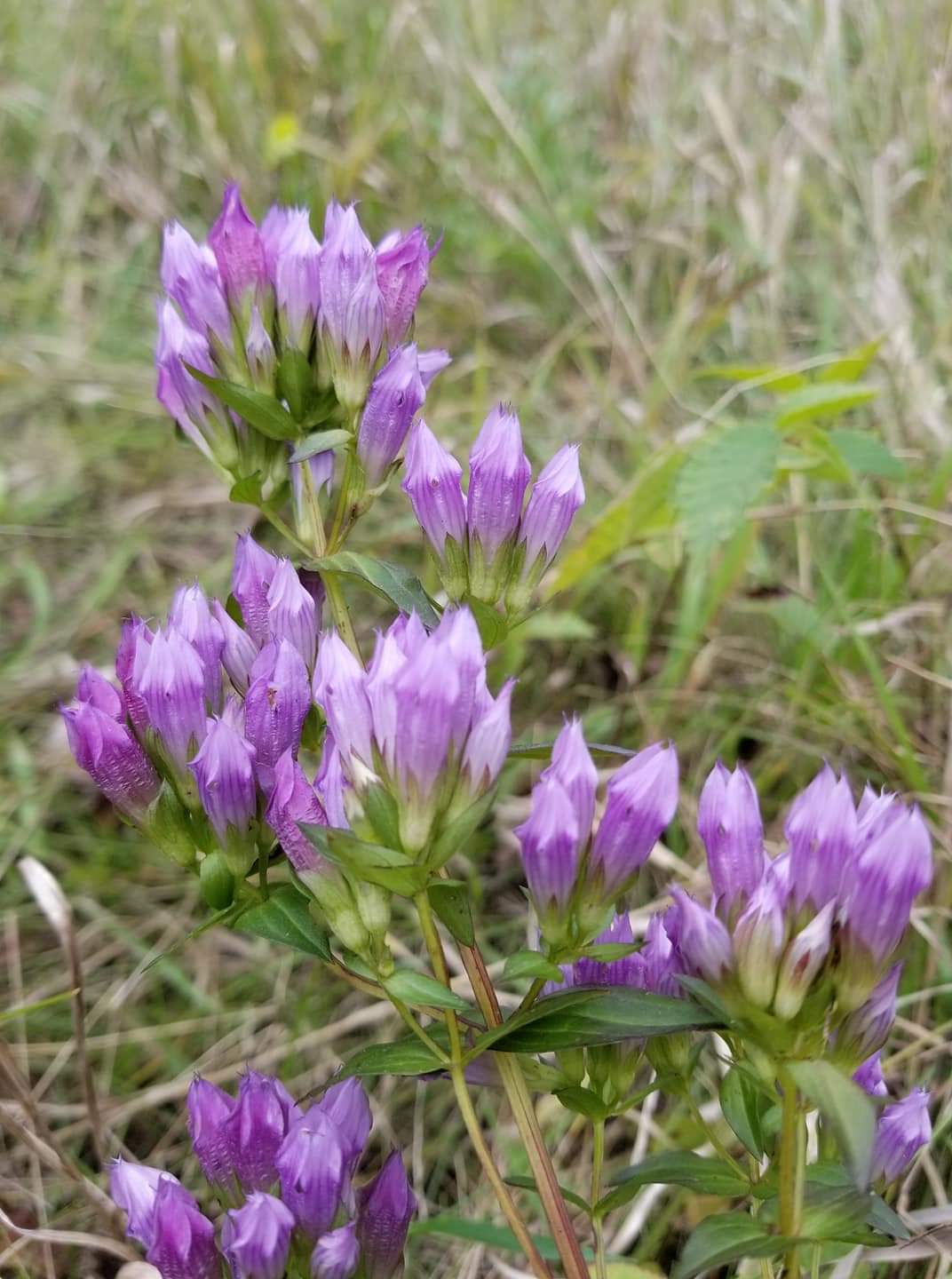 So going back to the Royal Family idea. . . if this plant is the only gentian on my land, then I should dub this duke of the gentians "King" of my prairie. Prairie Dog agrees. 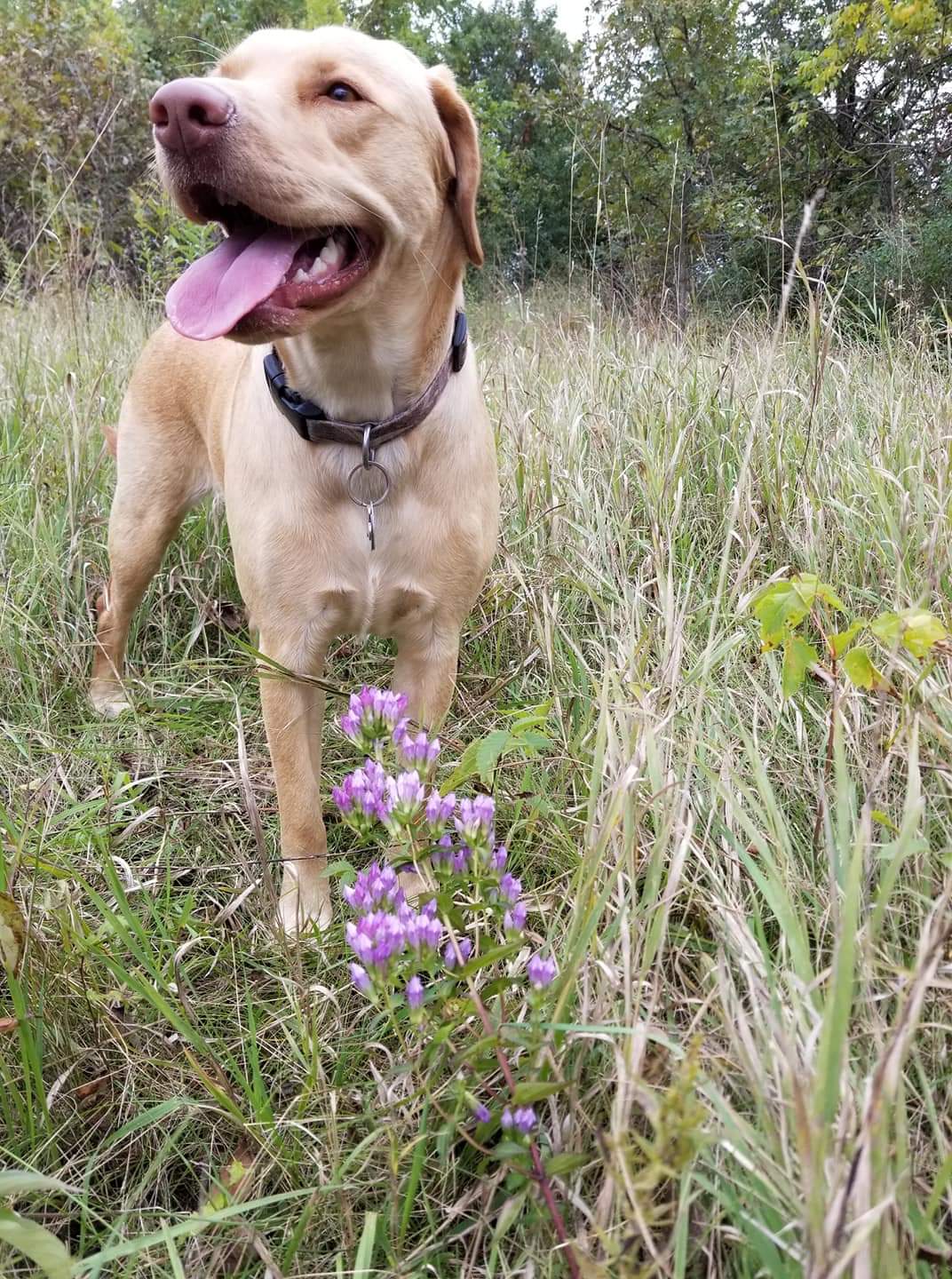