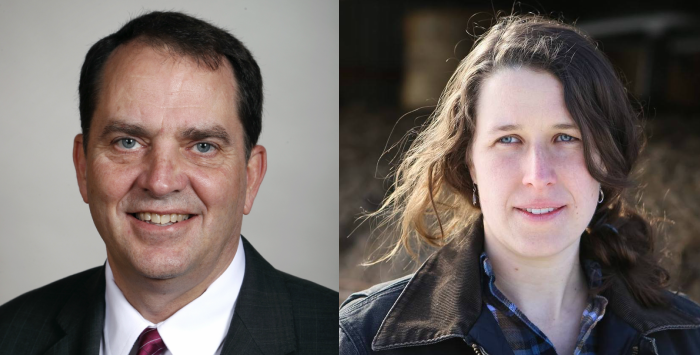 "Every vote should be counted," Democratic challenger Kayla Koether said in a statement after a recount showed her trailing Republican State Representative Michael Bergan by nine votes in Iowa House district 55. Her comments suggest Koether is preparing litigation to force the counting of 33 absentee ballots, which were mailed on time but not counted because the envelopes lacked a certain kind of postmark.

If Koether does not file suit before election results are certified on December 3, one or more of the disenfranchised Winneshiek County voters should take legal action. Election officials did not properly interpret Iowa statute when they excluded those ballots.

The initial count in House district 55 showed Koether seven votes behind Bergan. The recount completed on November 27, which only covered Clayton and Winneshiek counties, showed Bergan increased his district-wide vote total to 6,924, while Koether received 6,915 votes.

The 33 uncounted ballots in Winneshiek County include at least 31 from residents of House district 55--enough to change the outcome if every voter made a choice in the legislative race and at least two-thirds backed Koether.

Iowa law has long stated that absentee ballots arriving after election day can be counted only with a valid postmark. Thomas Nelson of the Waterloo/Cedar Falls Courier reported on November 13,

“We have ballots that don’t get counted every year because they aren’t postmarked,” said Ben Steines, Winneshiek County auditor. [...]

“Any ballots received after Election Day that are not postmarked will not be included in the official results,” Steines said. [...]

“The law is very clear. An absentee ballot, in order to be counted, must be received by the county auditor by 9 p.m. on Tuesday, Election Day, or postmarked the day before the election and received by noon on the Monday following,” said Dawn Williams, director of elections at the Iowa Secretary of State’s office. “That postmark has to be legible.”

Steines was following guidance from the Secretary of State's office, but that advice doesn't reflect the plain wording of Iowa Code 53.17(2) (emphasis added):

In order for the ballot to be counted, the return envelope must be received in the commissioner’s office before the polls close on election day or be clearly postmarked by an officially authorized postal service or bear an intelligent mail barcode traceable to a date of entry into the federal mail system not later than the day before the election and received by the commissioner not later than noon on the Monday following the election.

Multiple sources confirm "an intelligent mail barcode" is on the return envelopes of the disputed Winneshiek County ballots. If that barcode can prove that voters mailed their ballots on or before November 5, there is no valid reason to exclude them from the official count.

State law was written to ensure that voters couldn't abuse the system by mailing ballots after election day. County auditors should take every reasonable step to determine whether ballots were mailed on time, but they shouldn't favor a traditional postmark over a barcode that serves the same purpose. The Iowa Constitution protects the right to vote.

The full written statement from Koether on November 28 did not clarify whether she intends to file a lawsuit.

The Kayla Koether for Iowa campaign said today that with the completion of the Iowa House District 55 recount in Winnehiek and Clayton Counties Koether, the Democrat, trails Republican incumbent Michael Bergan by nine votes out of nearly 14,000 votes cast.

Even after the recount, there are thirty-three ballots in Winneshiek County that remain uncounted.

UPDATE: Koether filed suit in Polk County District Court on November 29, and a hearing is scheduled for November 30. Secretary of State Paul Pate and Winneshiek County Auditor Steines are the defendants. Key points from the court filing, enclosed in full below:

The Iowa Democratic Party released this statement on November 29.

Koether Takes Legal Action to Guarantee Every Vote Gets Counted

On Tuesday of this week, the recount boards in Clayton and Winneshiek Counties completed their work. After the recount, Koether trails Republican Michael Bergan by just nine votes out of nearly 14,000 votes cast.

However, the recount board did not count 33 absentee ballots that arrived at the Winneshiek County Auditor’s Office after Election Day, including 29 that came in on November 7- the day after the election.

“Every Iowan deserves to have their vote counted. There’s no reason to strip away the rights of these 33 Iowans when there is a simple remedy to ensure their vote gets counted,” said House Minority Leader Todd Prichard of Charles City.

To date, the Iowa Secretary of State has refused to obtain the necessary barcode information from the United States Post Office (USPS) in Waterloo that can verify if the ballots were placed in the mail before Monday, November 5 and were legally cast. The Iowa Secretary of State has also refused to allow the Winneshiek County Auditor to count the ballots.

The emergency petition filed in Polk County District Court today requests the Winneshiek County Auditor and Iowa Secretary of State use the USPS barcode information on the ballots to a) determine when the ballots were placed in the mail and b) count those votes that were legally cast.

A copy of the petition is attached and a court hearing is set for Friday, November 30 at 1:30 pm.

LATER UPDATE: According to a source in the courtroom, Judge Beattie indicated he will issue an order on the temporary injunction by 10:00 am on Monday, December 3.

DECEMBER 3 UPDATE: Polk County District Court Judge Beattie (a Kim Reynolds appointee) denied Koether's request for a temporary injunction to block the certification of the election. However, he granted her request to have ballots evaluated by the U.S. Postal Service. He ordered Steines to seek information from the post office to determine whether the ballots were mailed on or before November 5.

In a written statement, Koether said, "This ruling is good news for the 33 Iowans who cast their ballots in good faith and deserve to have their votes counted. We’re pleased that the judge agreed that getting more information from the US Post Office on the uncounted ballots is essential. This is just the next step in making certain that every legal vote gets counted."

LATER UPDATE: Steines reported to the court on December 5 that the postal service confirmed 29 of the disputed ballots were mailed on time (by November 5). One ballot was mailed too late (November 6), and the postal service did not obtain readable data for three envelopes.

In a written statement, Koether said on December 6, "We now know for certain there are at least 29 Northeast Iowans who cast their ballots in good faith and followed the law to make sure their vote gets counted. Now that the dates have been verified, there is no reason that these Iowans should not have their votes counted."

The District Court has scheduled a hearing in this case for December 20, but it's not clear whether the judge will order the 29 legally cast ballots to be counted. The Iowa Attorney General's Office filed a motion to dismiss Koether's lawsuit on December 7. Excerpt:

This court lacks jurisdiction to resolve the third count of Plaintiff’s Petition. Plaintiff’s third count asks this court to order that the twenty-nine ballots that were mailed and recorded by the United States Postal Service before November 6 be counted by the Winneshiek County Auditor. However, the Winneshiek County canvass has been held, its results reported to the Secretary of State, and the outcome of the House District 55 election has been certified by the state canvass board. Iowa Code chapters 57 and 59 are the exclusive remedy for a candidate seeking to contest the result of an election for a seat in the General Assembly. Indeed, grounds for a contest include “that illegal votes have been received or legal votes rejected,” Iowa Code § 57.1(2)(e), or “any error in any board of canvassers in counting the votes.” Iowa Code § 57.1(2)(f). These grounds are at the heart of the Plaintiff’s argument to count ballots not counted at the time of the Winneshiek County canvass because the ballot return envelopes lacked a postmark and Intelligent Mail Barcode. Indeed, this court’s Order denying Plaintiff’s request for a temporary injunction recognized that the Plaintiff’s remedy to challenge the certification of the election is to contest the election in the House of Representatives pursuant to Iowa Code chapters 57 and 59.

Koether still has time to contest the election result. But Judge Beattie previously held that she would need to demonstrate that the outcome would change--hard to accomplish without counting the disputed ballots. Also, the Republican-controlled Iowa House could reject Koether's contest without considering the preferences marked on those 29 ballots.

Here's the motion to dismiss the lawsuit: