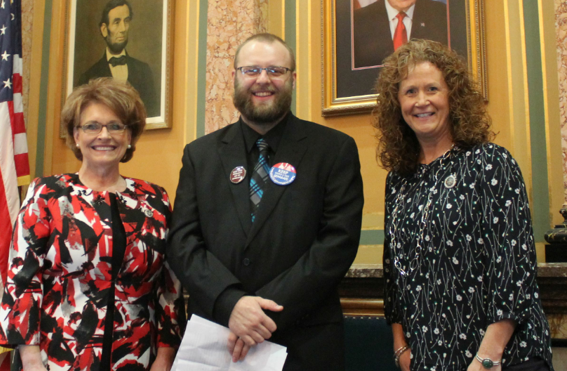 Justin Scott is the state director for the Iowa chapter of American Atheists. -promoted by Laura Belin

The notion of religious freedom — what it is, what it isn’t and what it should be — is being tested here in Iowa.

In April 2017, the Iowa House of Representatives respected my religious rights when I delivered the first atheistic invocation in that body’s history. The Iowa Senate, however, has denied my repeated requests to perform a similar invocation. In so doing, the Senate is not only directly discriminating against me, but also violating the Constitution, which protects all faiths equally.

In its upcoming session, the Senate faces a stark choice: continue to limit religious freedom or protect it for all Iowans.

My Republican state senator, Craig Johnson, was the first to deprive me of religious equality, rejecting my request to deliver an invocation. He has since rebuffed me for a second straight year. During the 2018 legislative session, he cited his religion to justify his bigotry: “I am accountable to my constituents that know me to be a legislator with Christian beliefs.”

I grew up Christian, and the Gospel doesn’t advocate taking away non-Christians’ religious freedom. Despite Johnson’s denial, I sought sponsorship from every Iowa senator, regardless of party, in order to test what religious freedom in Iowa really means. The verdict: none invited me to speak in the chamber. Not all senators responded to my e-mails, but many who did explicitly rejected my request out of religious intolerance.

This is unconstitutional. In its 2014 ruling in Greece v. Galloway, the U.S. Supreme Court held that government invocation policies cannot discriminate against the non-religious any more than they could discriminate against Catholics, Jews or Buddhists. The Iowa Senate’s invocation process fails this test. In order to speak, you must approach your elected official and request sponsorship. Apply to deliver an invocation that doesn’t match their religious persuasion, and your request may be denied, scoffed at or flat-out ignored.

To honor the Constitution’s guarantee of equality, the Senate must allow atheists like me to deliver invocations or do away with the ritual. Some senators, preferring this second option, denied my request in order to voice opposition to mixing church and state. One senator wrote to me, “I do not participate in the morning ceremony. I believe that is pushing one individual’s beliefs onto others that may not have the same viewpoint.” Another senator stated, “It is apparent, by their participation, the majority wish to have their show. […] I will NOT sponsor anyone to take any part in this process.”

So where do we go from here, Iowa? To me, the answer is simple: the Iowa legislature must remedy the prayer process by making it more inclusive to all Iowans. Changing the policy so that the application runs through a non-partisan third party, not legislators, would stop religious discrimination in this situation. The only other option is to scrap the whole process, which would allow lawmakers to focus less on religious differences and more on their legislative duties.

Editor’s note: The Freedom From Religion Foundation wrote to then Iowa Senate President Jack Whitver in March 2018, warning him about the ongoing constitutional violation and urging the chamber to “open its prayers to all comers, including atheists, agnostics, Humanists, Wiccans and other minority beliefs.” (Click here to read that letter in full.) Whitver is now the Senate majority leader.