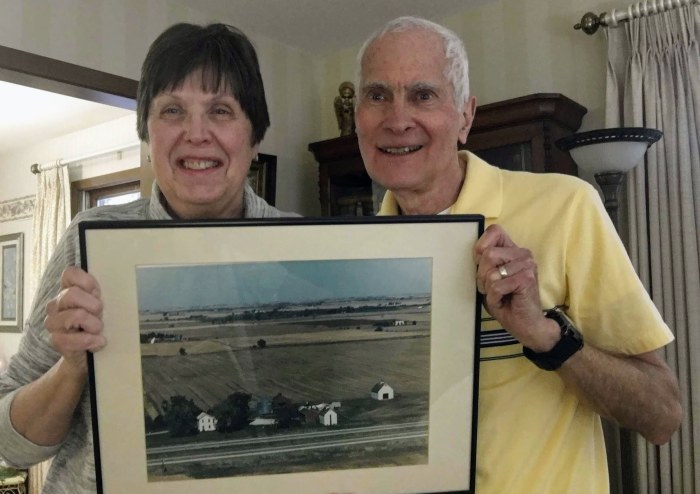 For those who feel Big Oil always gets its way, think again. In a battle of Lamb vs. Lion (read on and you’ll see what I mean), the little guy and gal just accomplished something impressive.

When the Dakota Access Pipeline (DAPL) was still under discussion, most Iowa landowners I met as I walked the pipeline route were against it. In the end, many signed voluntary easements — not because they wanted to but because they felt they had no choice.

Dick and Judy Lamb, whose farm in Boone County was bisected by DAPL, opposed the pipeline from the start. They continue to do so, and their steadfastness just paid off. Literally.

On January 16, the Lambs achieved an important victory against DAPL. In district court in Boone, Iowa, after a trial that lasted seven days, a jury ruled in favor of the Lambs, ordering DAPL to compensate them for the lost potential of their property due to the pipeline.

In 2016, the Lambs refused to sign an easement with DAPL for access to their land along Highway 30, two miles from the city limits of Ames. While the Lambs had not developed the property themselves, it struck them as grossly unfair for DAPL to take that opportunity away from them and their children, who would inherit the land. They believed a hot pipeline would render their property unsuitable for many types of potential development. The Lambs had raised this issue with DAPL prior to being forced into condemnation, but the company refused to recognize any development potential for their land.

So the Lambs took DAPL to court. “We knew it would be an uphill fight against a highly proficient, specialized legal team,” Dick told me in an interview after the trial. “Their attorneys travel the country doing just this type of litigation, so they’re probably the best in the business. In fact, after they presented their case at the trial, I wondered whether we’d get anything at all.”

The Lambs went on to note that, for technical reasons not easily explained, this particular lawsuit addressed the pipeline damage to just half of their land along Highway 30. There likely will be another trial this summer regarding the other half.

Both Judy and Dick said the experience of the trial helped restore their faith in the legal system. They were impressed that the jury remained attentive through hours of highly technical presentations on land-valuation issues, and after six hours of deliberation, issued a fair ruling.

Any day now, the Iowa Supreme Court will issue its ruling in Puntenney v. Iowa Utilities Board — the lawsuit filed by nine landowners and the Iowa Sierra Club over the board’s decision to grant eminent domain to a private pipeline company. This landmark case isn’t the only legal action pending against DAPL. Other Iowa landowners have filed suits over soil compaction, ruined terraces, tile damage, and uncompensated crop loss.

I asked Dick and Judy how they felt about the threat of either a second pipeline coming through their land or the possibility that DAPL would increase the amount of oil it pumps through the existing pipeline. “Either of those options is a scary thought,” said Judy. “For now, the big picture is we showed that it’s possible to beat DAPL in court. That should give hope to other landowners who have lawsuits pending.”

Indeed, though the Lambs’ trial received little fanfare and almost no mainstream press coverage, their victory is a big deal. It’s further indication that the tide is turning against Big Oil and the politicians who do its bidding. The Lambs’ efforts should inspire all of us to persevere — and to support the landowners, farmers, and Native communities on the front lines of this and other fossil-fuel infrastructure fights.

Ed Fallon served in the Iowa House for 14 years. He directs Bold Iowa and also has operated a talk show, The Fallon Forum, for the past ten years. His first book, Marcher, Walker, Pilgrim, was released in December.