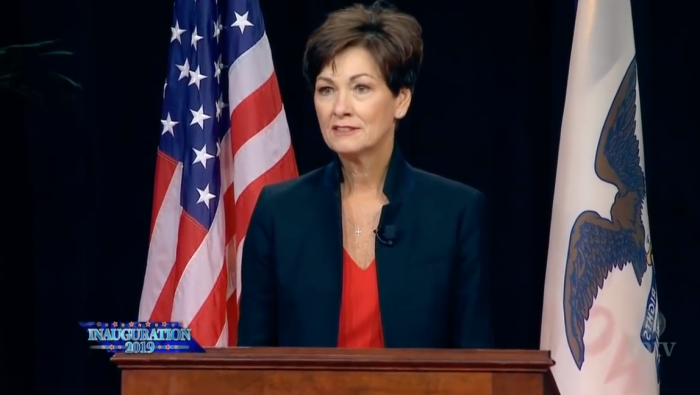 Matt Chapman reacts to Governor Kim Reynolds’ remarks after being sworn in on January 18. You can watch her speech here and read the prepared text here. -promoted by Laura Belin

Governor Kim Reynolds gave her inaugural speech Friday and touched on social media in an interesting way. To my ears, it seemed to conflate the worst of these platforms–comments sections where so many of us turn for affirmation in destructive ways–with informational content from people reporting political facts in real time, from where they are happening.

“Too many have become dependent on their phones, captive to social media, to the bitterness and pain that exists there. I see it less here than in other parts of our country, but I see it.”

This works because there is a kernel of truth to it. Just scroll through the comments on any post and it’s there. But be skeptical of any politician that dismisses reporting, not by its content, but rather by the platform itself or a feature like the comments. This is just a nuanced version of using “fake news” as a verb, a strategy used to trigger your defense mechanism by conditioning you to disregard any data that challenges your perception of reality.

“I see it less here than in other parts of our country, but I see it.”

This next sentence is another interesting line. I’m not sure where the governor is looking, but it would be disingenuous for me to say that patronizing claims made out of whole cloth in a political speech is only practiced on one side of the aisle.

If you agree with the premise that the segment of the speech regarding social media conflates trolling with actual information, you can see it as manipulative. It has the effect of implying there is shame in using the platform, therefore if you don’t engage in consuming information from that source, you are superior. While that is a terrifying concept, it’s not an original one.

“My ask of all Iowans as we go into the next four years is that we devote less time to online political arguments and more time to each other. That we don’t let a screen steal from our family and friends, from our communities and schools.”

It’s true that many social media consumers spend an alarming amount of time staring at their screens. Just like alcohol, nicotine, food or a host of other vices, social media can take over people’s lives. But there is a big difference between being intelligently informed in real time and skulking comment sections to “own” someone you are polarized with. This speech was crafted well, and it’s suspicious that the difference between content and comments weren’t given even a passing mention.

The reason this jumped out at me is the Iowa Senate majority just adopted rules that removed the 24-hour notice for subcommittee meetings. In the past, the legislative website typically showed what bills would be available for debate and a vote in various Senate subcommittees at least 24 hours ahead of time.

Also removed were rules prohibiting legislators from closing subcommittee meetings to the public. While Senate Republicans say that it’s just housekeeping, the ability to block citizens from their only chance to provide input before legislation moves to a full committee is alarming. (Iowa House and Senate committee meetings do not include time for public comments.)

In the first week of the new session, the strategy seems to be consistent. From the governor telling us to stop getting information from digital sources to the Senate changing rules so the public can be blocked from commenting or attending meetings, the goal seems to be to obfuscate the agenda until it’s too late.